In the end, repeated protests from Turkey had little impact: France's lower house of parliament voted on Thursday to approve a draft law that would impose stiff penalties on any person in France who denies the genocide of Armenians by Ottoman Turks between 1915 and 1917.

In an interview with French foreign broadcaster France 24, Patrick Devedjian, a member of Sarkozy's UMP party of Armenian origin, praised the vote. "The purpose of the bill is to stop foreign nations from coming to France and pushing discriminatory propaganda against people living here," he told FRANCE 24. "We are not seeking to rewrite history; the Armenian genocide is an established fact, an undeniable truth."

It didn't take long for Ankara to provide an official response. Turkish Prime Minister Recep Tayyip Erdogan said his country would recall its ambassador from France, suspend joint military maneuvers and restrict French military flights. "We are recalling our ambassador in Paris to Ankara for consultations," the Turkish president said.

"As of now, we are cancelling bilateral level political, economic and military activities," Erdogan said, according to the Associated Press. "We are suspending all kinds of political consultations with France."

Both Turkey and France are members of NATO, and the disagreement comes at a time of cooperation on issues ranging from the uprising in Syria to Afghanistan, according to AP.

Paris moved in January 2001 to formally recognize the killings that took place as genocide, but at the time that decision did not include any punitive measures for anyone denying the Armenian massacres took place.

If the legislation is implemented, the Public Prosecutor would now be empowered to press charges against anyone who denies any case of genocide officially recognized by France on French soil -- even at public protests. The law also carried additional weight because organizations that, "in their charter" engage themselves on behalf of "the moral rights and honor of the victims of genocide, crimes against humanity or war crimes," can also be able to be included as co-plaintiffs in future cases against people who deny genocides.

Turkey, as the legal successor to the Ottoman Empire, disputes that what took place between 1915 and 1917 can be called "genocide." In a statement, the French National Assembly described attempts by Turkey to apply pressure on the parliament as "unacceptable."

In the run-up to Thursday's vote, Ankara had warned of "lasting and irreparable consequences" if the French moved to approve the draft law. "It is out of the question for us to accept the draft law that is on the agenda of the National Assembly of France, which aims to eliminate our freedom to refute the unfair and unfounded accusations against our country and nation," Turkish President Abdullah Gül said in a statement released earlier this week.

Officials in Turkey consider the planned law to be a maneuver by French President Nicolas Sarkozy and motivated by an election campaign in which he is targeting ethnic Armenian voters in France. Leaders of the opposition Socialist Party in France tend to agree. Around 500,000 people of Armenian origin reside in France, and Armenian groups had pushed for the legislation. The draft law had been written by Valérie Boyer, a member of Sarkozy's UMP party, and with the president's backing. Under the law, denying genocide would be a crime punishable with a fine of up the €45,000 ($59,000) and one year in jail.

However, following its passage in the National Assembly, the bill still requires the approval of the country's second legislative chamber, the Senate, which is dominated by the opposition Socialists. It could face a significant challenge there given that the Socialists are viewing the bill as a campaign move by the president. The speaker of the National Assembly says it may not go before the Senate until the end of 2012.

The controversial legislation deals with a particularly dark chapter in Turkish history. Between April 1915 and July 196, around two-thirds of all Armenians living in the territory of what is modern-day Turkey were either deported or killed.

It has been estimated that between 200,000 and 1.5 million Armenians lost their lives in the Ottoman Empire during the massacres, which were organized by the so-called Young Turks during World War I, who were allied with the Central Powers, which included the German Empire and the Austro-Hungarian Empire.

The planned killing of the Christian minority is considered the first genocide of the 20th century, and more than a dozen parliaments around the world have codified the massacres as official cases of genocide. Turkey, however, has never accepted the description and instead speaks of "tragic events" that took place at the time.

A few hours after the vote in the National Assembly, more than 1,000 people of Turkish origin protested in front of the parliament in Paris against the planned law.

In addition to the Armenian genocide bill, France has had legislation in place since 1990 making it a crime to deny the Holocaust. But Berlin still has not officially recognized the Armenian genocide. In 2005, the German parliament called upon Turkey to acknowledge its "historical responsibility," but avoided using the word "genocide." Germany is home to a population of several million residents of Turkish descent. 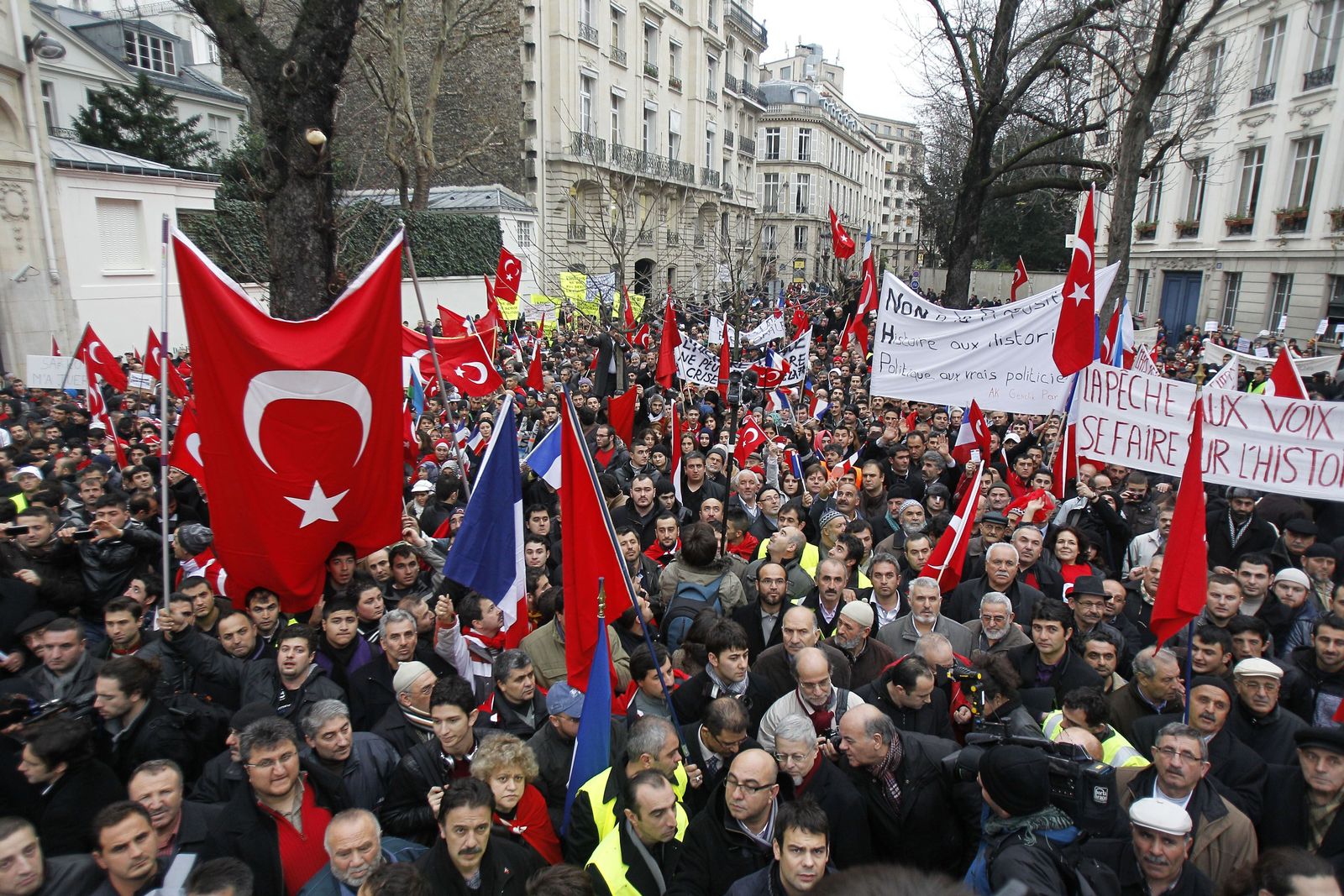 Demonstrators from France's Turkish community protest a vote by the lower house of parliament making it a crime to deny the Armenian genocide.