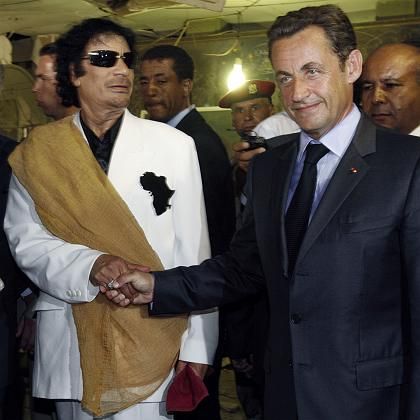 Libya's President Gaddafi (l) greets his French counterpart the day after the release of six foreign medics from Libyan jails.

The European aerospace and defense group EADS is close to signing a deal French President Nicolas Sarkozy has made with Libya to sell that country anti-tank missiles and communications systems.

The French government on Friday confirmed that EADS had finalized an accord to sell Milan anti-tank missiles to Libya, and that talks on supplying radio systems were in an advanced stage. The two agreements are worth almost €300 million ($410 million), according to French media reports based on unnamed Libyan sources.

"The (missile) contract is awaiting the signature of the Libyan client, and EADS is happy that negotiations could be concluded," EADS said in a statement. French Defense Minister Herve Morin said the contracts had not yet formally been signed. However a Libyan official said on Thursday in Tripoli that Libya had signed the contracts, according to the Associated Press.

It would be the North African country's first arms deal with the West since a weapons embargo was lifted in 2004. The Milan anti-tank missiles will be built by MBDA, a joint venture between EADS, Britain's BAE Systems and Italy's Finmeccanica.

The agreement comes just a few days after a visit to Tripoli by Sarkozy, who earned praise in some quarters for clinching the defense accord and signing a memorandum of understanding on a nuclear energy deal.

But the agreements are not without controversy. French Socialists have questioned the wisdom of selling arms to an authoritarian country which had long been an international pariah due to its suspected involvement in international terrorism. "Should we have arms deals with a country like Libya, ruled by Moammar Gadhafi?" said Socialist party leader Francois Hollande on France Inter radio.

Hollande has also called for a parliamentary commission to inquire whether the sale is related to the release of five Bulgarian nurses and a Palestinian doctor who had been jailed for more than eight years, accused of infecting more than 400 children with HIV. At one point the six had been sentenced to death by a Libyan court. They were freed last week after a high-profile visit to Tripoli by Sarkozy's wife Cecilia.

"It's true that President Sarkozy's state visit to Tripoli was very successful because the negotiations for freeing the nurses had gone through just before, and it seems that greatly accelerated things, to the benefit of French companies," he said.

The weapons deal, and the release of the medical workers, marks yet another step in Libya's rapprochement with the international community. The country has publicly abandoned a program to develop weapons of mass destruction and made payments to families of those who died in the 1988 bombing of a Pan Am airliner over Lockerbie, Scotland.

The European Union lifted its weapons embargo on Libya, which had been in place since 1986, in October 2004. However Gadhafi's son Seif al-Islam claims the ban is still de facto in place, something he largely blames Germany for.

While Sarkozy's agreement with Libya has been slammed by some in Europe, German Foreign Minister Frank-Walter Steinmeier has warned against overblown criticism. In Brussels, European Commission president José Manuel Barroso said last week that the EU was moving to normalize trade and political ties with Libya.