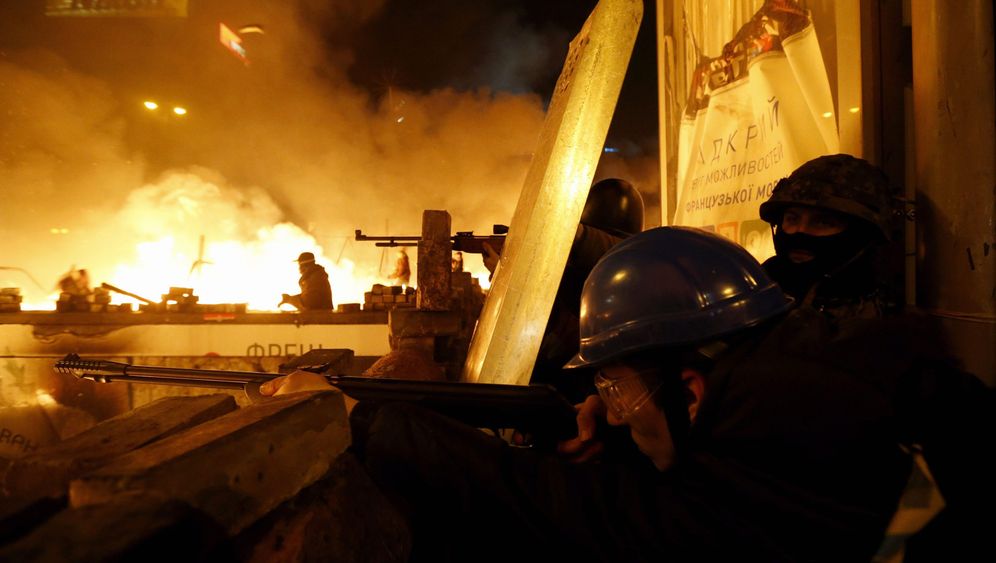 Violence in Ukraine on Tuesday marked a deadly escalation in tensions between opponents and the government of Ukrainian President Viktor Yanukovych. The two sides have been at loggerheads since the end of November, but the eruption on Tuesday night was by far the worst thus far. Weeks of fruitless negotiations over the clearing of occupied buildings and the release of arrested protesters gave way to bloody clashes between demonstrators and Yanukovych's "Berkut" security forces.

Human life would seem to no longer count for much in Kiev. Not to the commanders of Berkut, who have moved from using truncheons and tear gas to firing live ammunition into the crowds. But also to the self-appointed Samooborona Maidanu, of Self-Defense Forces of Maidan, who have resorted to violence against their opponents, with masked fighters lobbing Molotov cocktails and stones at police. No longer are they listening to entreaties from opposition political leaders Arseniy Yatsenyuk and Vitali Klitschko.

On Tuesday, Kiev experienced one of the bloodiest nights seen in Eastern Europe since the collapse of the Soviet Union. At least 25 people died and 241 were injured; the protest camp on Independence Square stood in flames and burning barricades still lit the skies during the early morning hours on Wednesday. The former Trade Union Headquarters, which has served as the main base of the opposition, also burned.

In Lviv in the West, protesters set armored police vehicles on fire. In Ternopol, government opponents stormed the offices of the public prosecutor's office and set fire to a police station. Ukrainian media are reporting that some police units in Ternopol defected to the opposition side. The scenes coming out of Ukraine are more evocative of a civil war than the peaceful Orange Revolution that took place 10 years ago.

Many of the dead reported on early Wednesday morning were killed by gun fire. Ukraine's Interior Ministry is reporting that at least seven police officers were killed, and the Health Ministry has confirmed the total number of dead at 25. Government opponents have also posted photos of the bodies of dead protesters. And images are circulating on social networks showing badly injured police.

On Wednesday morning, Berkut units loyal to the president ordered protesters to clear the Maidan, as Independence Square is called in Ukraine, with loudspeaker announcements saying an "anti-terror operation" is planned. But from the stage of the protest camp, speakers called on the people of Kiev to take to the streets. "Stand up, Ukraine -- the fate of our children is at stake. Death to our enemies!" Vitali Klitschko, a political opposition leader, also joined the people on the square wearing a bulletproof vest.

The violence began on Tuesday as government opponents began marching toward the parliament building. The opposition had announced a peaceful protest, but then began throwing stones and incendiary objects. Security forces struck back brutally. Some observers said the bloody clashes in Kiev were reminiscent of those that accompanied the collapse of the Soviet Union during the early 1990s, especially in the Baltic states and the Caucasus.

At this point, it no longer seems possible to rule out any scenario, including Ukraine's collapse. Since its independence, the country has been constantly divided, with multiple and disparate centers of power. In the structurally weak west, nationalists who loathe Russia are in power. The major bastions of support for President Yanukovych are in the east, where the majority speaks Russian. The southern part of the country is also more closely aligned with Russia. Lying in-between is the capital city Kiev, a place Yanukovych has never cared much for. Behind the scenes, the oligarchs are pulling the strings, shadowy magnates who back governments only as long as they remain useful.

Since independence in 1991, the power centers have sought to come to terms with each other with varying degrees of success, but generally peacefully. Now hate and violence are prevailing. The number of people in Kiev who now doubt that Ukraine can somehow return to that status quo is rapidly growing.

In Europe, where leaders have been the object of some criticism in recent weeks for their reticence in addressing the ongoing stand-off in Ukraine, reactions to Tuesday's violence have been strong. German Foreign Minister Frank-Walter Steinmeier released a statement late on Tuesday in which he said: "Those responsible for decisions that lead to bloodshed in the center of Kiev or elsewhere in Ukraine will need to consider that Europe's previous reluctance for personal sanctions must be rethought."

He has been joined on Wednesday be several other European leaders indicating that EU sanctions may be forthcoming. French Foreign Minister Laurent Fabius said that, with the German cabinet in Paris on Wednesday, action on Ukraine will be discussed and that personal sanctions are "probable." Polish Prime Minister Donald Tusk likewise said he would urge European leaders to impose sanctions. Belgium's foreign minister joined the calls.

European Commission President José Manuel Barroso released a statment on Wednesday saying he expects that "targeted measures against those responsible for violence and use of excessive force can be agreed by our member states as a matter of urgency." Europe's foreign policy chief Catherine Ashton has called an extrodinary meeting of European foreign ministers on Thursday to discuss possible sanctions.

Russia, meanwhile, has said it will use its influence to ensure that peace returns in Ukraine, though Moscow made clear where it believes blame should be placed. On Tuesday, the Russian Foreign Ministry released a statement saying: "What is happening is a direct result of the conniving politics of Western politicians and European bodies." A new statement on Wednesday stated: "The Russian side demands that leaders of the (opposition) stop the bloodshed in their country and immediately resume dialogue with the lawful authorities without threats or ultimatums."

But the giant next door has pushed blatantly in recent weeks for greater autonomy for the regions in Ukraine. The Russians are using the term "federalization" for it, with the hope that the autonomy would enable Moscow to tighten links between itself and the industrial belt in eastern Ukraine.

Moscow also isn't please with Yanukovych. Despite his pro-Russian stance, Yanukovych has no interest in getting degraded by Moscow to the status of a weak vassal. Many within the Kremlin consider him to be a traitor. President Vladimir Putin's Ukraine advisor, Sergei Glazyev, has been of the opinion for weeks that Yanukovych should have taken action to forcefully clear the Maidan. When Yanukovych sought to speak with Putin on Tuesday evening, the Russian president demonstratively kept him waiting.

Late at night, Yanukovych then ordered Klitschko to talks in his residence in Bankova Street. The president first made Klitschko wait for hours and then had little to say to him. Yanukovych demanded that the protesters leave. He didn't offer any concessions, and Klitschko left the meeting feeling resigned.

Yanukovych then declared that the opposition had been responsible for the escalation. "The leaders of the opposition have disregarded the principle of democracy according to which we obtain power through elections and not on the street … they have crossed the limits by calling for people to take up arms," the president said. He said those responsible would face the law.

After midnight, as flames continued to roar through the barricades and tents on Independence Square, a priest stepped up onto the stage and began to pray. 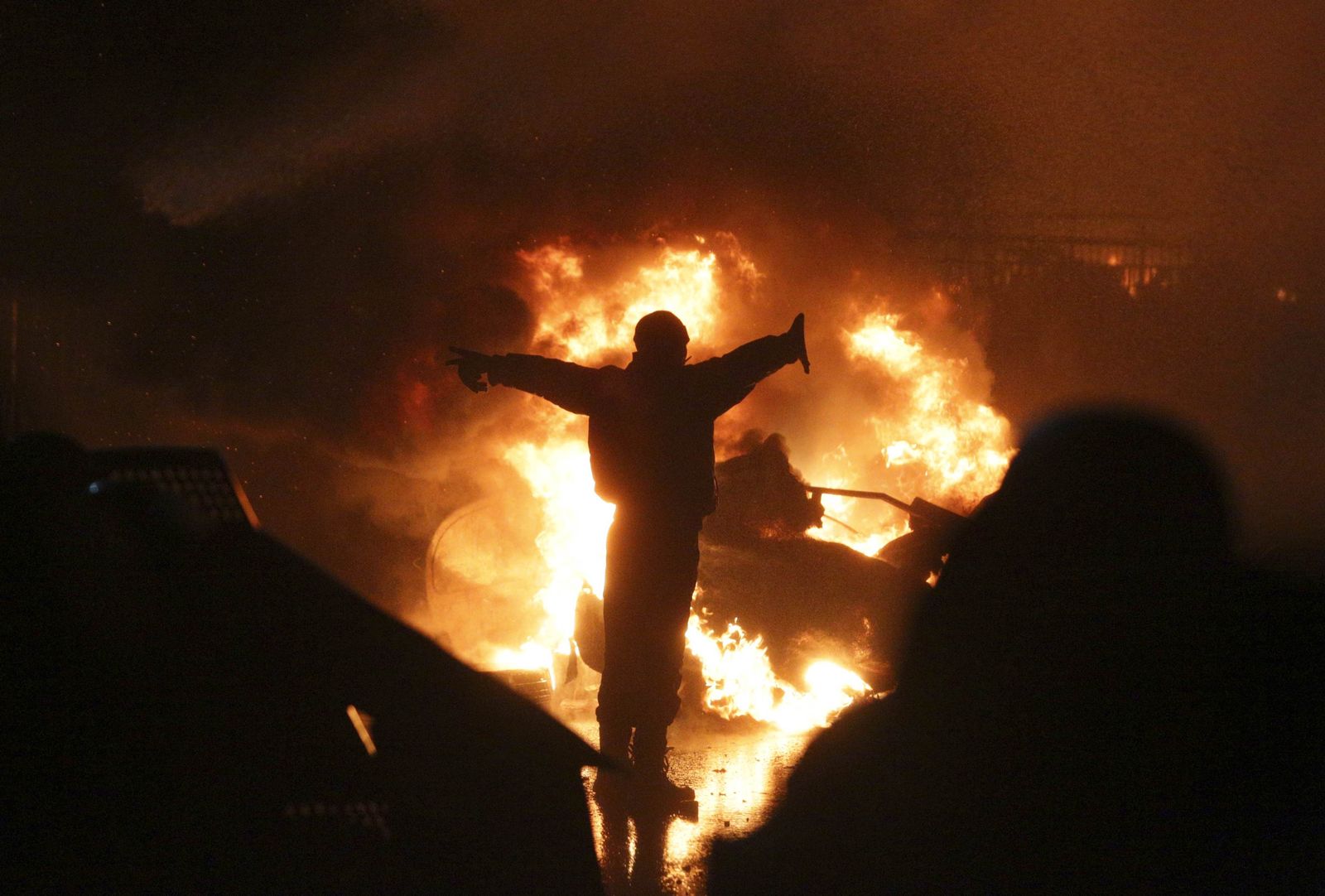 Ukrainian Viktor Yanukovych struck a defiant tone, saying that opposition leaders "crossed a line when they called people to arms."