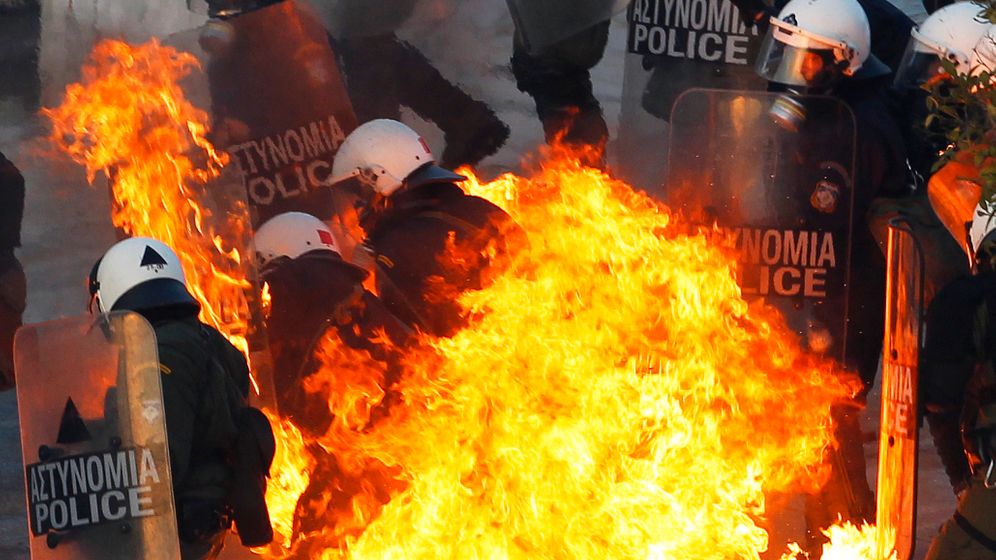 In the end, the Greek government managed to get its controversial austerity package through parliament, but the price was high. Coalition parties had to deal with a number of rebel lawmakers, while at least 120 people were injured in some of the most violent protests Athens has seen in months.

A majority of 199 members of parliament voted to approve the package on Sunday night, with a total of 74 lawmakers casting votes against it. The tough austerity package details €3.3 billion ($4.35 billion) in budget cuts for this year alone, including public-sector layoffs, cuts in the minimum wage and reductions in some pensions.

The two main parties in the coalition government, the center-left Socialists and the conservative New Democracy party, each expelled about 20 rebel deputies from their parliamentary groups after they voted against the package.

The parliament's approval of the austerity package was an essential precondition for the release of the second European Union/International Monetary Fund bailout package for Greece, which is worth €130 billion. EU finance ministers will now meet to approve the package on Wednesday. Without the money, Greece would default in March, when €14.5 billion worth of bonds come due.

During a heated debate, Prime Minister Lucas Papademos had strongly encouraged lawmakers to vote for the austerity bill, calling it a decision of "historic importance." He said the implementation of the program would not be easy. "We are fully aware that the economic program means short-term sacrifices for the Greek people."

In the runup to the vote, George Karatzaferis, leader of the far-right Laos party, a junior partner in the coalition government, had announced that members of parliament with his party would not support the bill. Several government ministers had also resigned in protest at the package.

The bill also provides for a bond swap for private-sector investors that will slash the value of their bond holdings by around 70 percent. If the bill had not been approved, Athens would have missed a Feb. 17 deadline to offer investors the so-called haircut.

The Greek parliament's vote was overshadowed by hours of rioting on the streets of Athens. Protesters wreaked devastation in the city's downtown area in what was described as the worst rioting in years. Dozens of buildings were burned, including cinemas, cafes, stores and banks, and looters ravaged businesses. There were clashes between masked protesters and police until well into the night. At least 120 people were injured, including 50 policemen. A total of 67 suspected rioters were arrested, and a further 70 detained. There were reports of violent protests in other Greek towns and cities, including the city of Thessaloniki and the islands of Corfu and Crete.

Civil Protection Minister Christos Papoutsis said that "external factors" had caused the arson and "vandalism" in the capital. According to the fire department, most of the fires in Athens were caused by Molotov cocktails. The fire department said it had had difficulties in reaching burning buildings because of the crowds on the streets. In the downtown area, a one-story building with an upmarket jewelry store and a neighboring cinema were completely burned down. Earlier, tens of thousands of demonstrators had protested peacefully against planned wage cuts and layoffs.

After Sunday's vote, the euro rose slightly against the dollar to over $1.32, offsetting part of last week's losses. Traders urged caution, however, emphasizing that the vote was just a single step in the fight to save Greece.

Meanwhile, German Finance Minister Wolfgang Schäuble kept up the pressure on Greece in an interview published Sunday. "Greece needs to do its own homework to become competitive," he told the Welt am Sonntag newspaper, "whether that happens in conjunction with a new bailout program or by another route that we actually don't want to take."

Asked if that alternative involved a Greek exit from the euro zone, Schäuble replied: "That is all in the hands of the Greeks themselves." Schäuble emphasized that "almost no one" assumes that a Greek exit will happen. Even if it does, he said, "they will still remain part of Europe."