When Antonis Samaras travels to Berlin on Friday, his role will be clear: Greece's conservative prime minister is coming as a supplicant who is being forced to ask for more financial assistance in Germany for his hard-hit nation.

Still, calls for more time to implement austerity measures in Greece have already met with resistance in a broad section of the German government. "Europe and the euro cannot be allowed to fail because people refuse to implement reforms," Economics Minister Philipp Rösler told SPIEGEL ONLINE on Sunday. And the accusation being heard in the run-up to Samaras' important meeting with German Chancellor Angela Merkel is that the Greeks are exactly these kinds of reform refuseniks.

However, the reality is much different. Measured according to GDP, the Greeks are clearly making much deeper cuts than all other crisis-hit countries in the euro zone. This was recently confirmed by a study from the central bank of Ireland, which itself has a reputation as a model cost-cutter. The report finds that, since 2010, Greece has responded to pressure from the European Union and the International Monetary Fund by slashing expenditures and raising taxes worth the equivalent of 20 percent of GDP -- which represents the most brutal belt-tightening program in the history of the EU. This achievement is particularly noteworthy given the fact that it has taken place in the midst of a severe recession.

Given these circumstances, why do there continue to be doubts about the seriousness of the Greeks' efforts? On the one hand, this results from the fact that, despite all the cuts, Greece's debt burden will continue to grow if its economy doesn't grow as well. On the other hand, media reports about phantom retirees or bureaucratic chaos continue to create the impression that ongoing waste in other areas will negate all of the successful belt-tightening efforts.

Breaking with a Tradition of Lies

Prime Minister Samaras has now made it clear, if only symbolically, that he also wants to break with the unfortunate Greek tradition of political clientelism. He did this by cancelling an appointment scheduled for two weeks after his trip to Berlin: the opening of the international trade fair in Thessaloniki.

The trade fair is fraught with more symbolism than practically any other political occasion in Greece. Until now, the government has made an annual pilgrimage north from Athens to Thessaloniki for the opening event. The high points of the ritual have always been the prime minister's address before the country's top business leaders and a press conference on the following day that goes on for several hours. It has always been akin to the kick-off for the Greece political season -- and one that also gave the prime minister's large staff a chance to enjoy itself in Thessaloniki's famous nightlife.

But that's now part of the past. Samaras has cancelled both the speech and the press conference, and he will limit himself to making only a brief visit.

Officially, at least, Samaras is doing all this because he wants to underscore his government's Spartan savings plans, which don't envision even a single cent for merrymaking. But the real reasons behind Samaras' cancellation are different. Since the end of the military dictatorship in 1974, the trade fair has been the venue at which prime ministers have traditionally made expensive promises to their own supporters while drawing attention to themselves by announcing ambitious projects.

For example, it was in Thessaloniki in 1984 that Socialist Prime Minister Andreas Papandreou prophesized "even better times" for the Greeks, though they were financed by public debt. In 1997, Prime Minister Kostas Simitis learned that Greece had been awarded the 2004 Summer Olympics just five minutes before delivering his speech in Thessaloniki. What triggered a huge amount of celebration then would go on to cause even more consternation when Greek citizens were handed a €10 billion ($12.5 billion) bill for the spectacle.

In 2003, Simitis made a last attempt to hold on to power in Thessaloniki: He publicly pledged a government spending program worth €1.2 billion. A year later, Greece's newly elected prime minister, Kostas Karamanlis, told his countrymen that Greece only needed a "slight economic adjustment" in order to get its debts under control -- although it was actually just the prelude to yet another phase of public over-borrowing along the path to Greece's de facto bankruptcy. All of this reached its culmination in 2009, just six months before Greece rammed into the iceberg, when then opposition leader Georgios Papandreou, speaking in Thessaloniki, made the now-notorious statement: "There's enough money there."

So Antonis Samaras had good reasons for cancelling his appearance and for keeping trips to the north by members of his government to a minimum. And that wasn't the only gesture with which he demonstrated his willingness to submit to austerity measures. During the first meeting of his cabinet, Samaras announced a 30 percent reduction in salaries for his ministers. He also decreed that the use of government cars should be kept to a minimum and also relinquished the Mercedes sedan usually made available to the prime minister. It has even been reported that Samara personally reviews the travel expenses submitted by the ministers in his cabinet.

Granted, with symbolic gestures like that, Samaras certainly hasn't eliminated Greece's administrative chaos or broken through the attitude of entitlement toward the government that is held by almost every interest group in the country, from cab drivers to ship owners. He also still needs to prove that he is no longer the flip-flopper on issues that he often was during his time in the political opposition. Still, though, the prime minister has made clear that he has recognized the problem. And that's already more than one can say about most of his predecessors.

In addition, concrete measures have been agreed to under Samaras -- first and foremost a further austerity package woth €11.5 billion that the prime minister pushed through despite resistance from the opposition.

"Greece is bleeding," the German tabloid Bild wrote in a headline ahead of Samaras' visit to Germany. During the past three years, quality of life has dropped by 30 percent and pensioners have lost one-fifth of their monthly benefits.

One can't really claim that Greece under Samaras hasn't been economizing enough. But have the efforts also been successful? Will Samaras succeed in modernizing the Greek state and, especially, the country's ailing political culture? It is still too early to answer these questions. After all, the man has only been in office for two months. 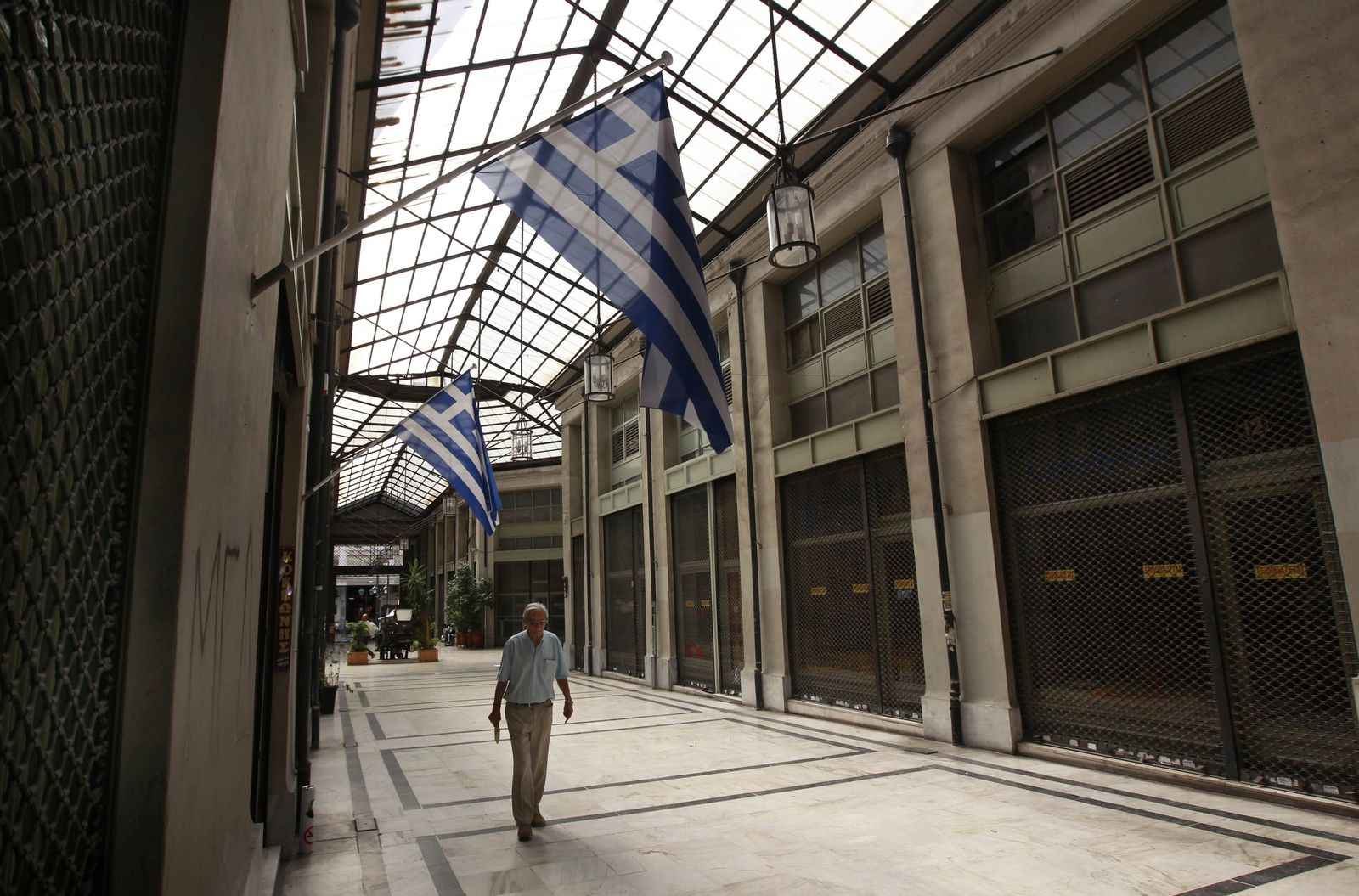 An arcade with closed shops in central Athens.