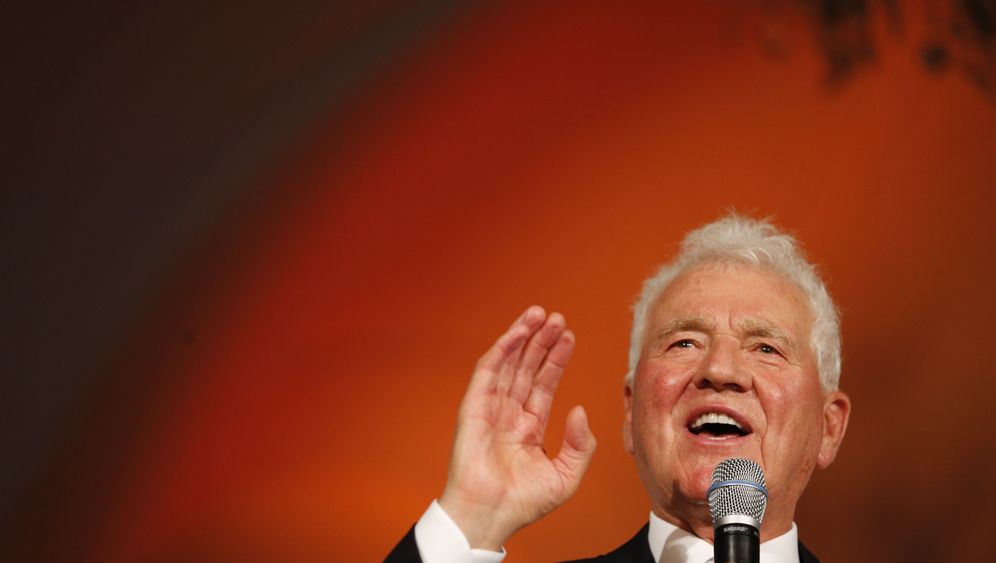 Frank Stronach always has to have the upper hand, even when the cameras are rolling. "You want to argue with me?" the Austrian-Canadian billionaire demands of one brave reporter from Austrian television channel ORF 2, the moment she attempts to pose a question.

Then he lets loose, pelting the reporter with allegations about European policies that run up debt and about the media's willingness to play along. And he takes aim at ORF, where the reporter herself is the wife of the editor-in-chief and, in Stronach's view, helps "keep people from learning the truth."

After 148 seconds of this primetime tongue-lashing, Stronach relents and condescendingly turns the floor back over to his host with the words, "Now you can ask me questions."

It would be easy to mock a man who demands perfection while speaking imperfect German, a man who -- at the inaugural convention of his new political party this September at Schönnbrunn Palace in Vienna, three weeks after his 80th birthday -- made boisterous promises to change the country's political landscape. "This September 27, 2012, is a day that will go down in the history of Austria and of the world," he declared.

The Path to Revolution

On the other hand, polls show the new "Team Stronach for Austria" movement enjoying around 10 percent voter support and a great deal of potential with one year to go before 2013 general elections. This is not least because its founder -- the man who gives the movement its name -- stands out from the ranks of Austria's usual career politicians through both his willingness to take risks and his record of achievements. He is skeptical of the European common currency, as are plenty of his compatriots, but is not hostile to immigrants, which could potentially help him attract voters away from the right-wing populist Freedom Party of Austria (FPÖ). And then there's Stronach's tendency to address global crisis scenarios with simple formulas -- for him, hard work and patriotism provide the path to "revolution."

In his biography of Stronach, titled "Let's Be Frank," journalist Norbert Mappes-Niediek describes the Austrian émigré's worldview as "the dictatorship of the industrious." Born out of wedlock to a mother who worked in a factory in the small Austrian town of Kleinsemmering, Franz Strohsack, who later changed his name to Frank Stronach, moved in 1954 to Canada, where he quickly made a name for himself. Originally trained as a tool and die maker, Stronach formed the company Magna International, an auto parts supplier that now employs 108,000 people worldwide. When Stronach retired as CEO in 2010, he sold a portion of his stake in the company for the equivalent of €672 million ($867 million).

Stronach's total wealth is currently estimated to be at least around €1 billion. Of that, €25 million will go toward funding his party's war chest. The rest of his wealth is kept mainly in the Canton of Zug, Switzerland, with its favorably low tax rates, and those assets serve to fuel the aura of a man with a flair for money.

Cash flows "like water and follows the path of least resistance," Stronach declared in 1994, before he began to channel his own wealth along the path of least resistance toward Austrian political parties. Among the beneficiaries were, on the left side of the political spectrum, former Austrian Chancellor Franz Vranitzky of the Social Democratic Party of Austria (SPÖ), as well as that party's former national secretary Andreas Rudas. On the right, former Finance Minister Karl-Heinz Grasser of the FPÖ also received his share of funding from the auto parts magnate.

In 1998, Stronach became majority stockholder at the venerable manufacturing company Steyr-Daimler-Puch. He also invested in his country's soccer team, in the hopes of seeing Austria win a World Cup -- a goal Stronach expressed personally to none other than legendary German player Franz Beckenbauer. And in 2009, Stronach's company Magna failed by only a narrow margin in its attempt to acquire Opel. Stronach is not the sort of businessman to let himself be scared off easily.

But that's "no reason for him to think he can buy his way into politics here," says Finance Minister Maria Fekter of the Christian, conservative Austrian People's Party (ÖVP). The comment is nothing less than a warning shot. Stronach, after all, has for the most part filed his taxes in countries other than Austria -- pressure is growing for him to shed some light on his financial assets.

Then again, there's no need for Stronach to worry unduly. For one thing, as a regular columnist with the influential daily paper Kronen Zeitung, he's well aligned with public sentiment. For another, he has references to offer from well beyond Austria's borders. One campaign ad Stronach particularly likes to show is a video in which a slim, white-haired man declares to Stronach that he is "proud of our friendship."

The man in the video? Bill Clinton.