Outside, the late summer has brought one last bout of sweltering temperatures to the Austrian city of Klagenfurt. But inside the convention center, the state of Carinthia has thrown a party for itself. A trade show devoted to wood products has just opened. Industry officials are giving remarks. The economics minister has traveled to Klagenfurt from Vienna, and even the bishop is there.

Finally, the state's governor steps up to the microphone, sporting a dark tan, smiling with his bright white teeth and wearing a traditional jacket he normally wears at such events. Jörg Haider reports that his state is home to "fantastic manufacturing companies" and that more than 12,000 new jobs have been created. Carinthia is pulling itself up from the bottom of the heap. It's a model for Austria's future. That, at least, is Haider's message.

The choir of the Carinthia Hunters' Association sings "Alpine Greeting," dressed in traditional green loden jackets. Later, Haider grabs a baton and, with a satisfied smile, leads the band in a march. Why not? Carinthia, for the most part, dances to Haider's beat. He received a 42.5 percent share of votes in the state's 2004 legislative elections. Not much is likely to change the next time around, when Carinthians return to the polls for state elections -- unless, of course, "Jörgi," as many people call Austria's most famous living far-right politician -- has returned to Vienna.

Haider, 58, is running for national office, too, in an election to be held this Sunday. The enfant terrible of Austrian politics and onetime second-in-command in a notorious coalition formed in 2000, Haider wants to return to the national stage. His "Alliance for Austria's Future" (BZÖ) -- a far-right splinter party founded in 2005 that has worked with limited success to win national seats -- will try on Sunday to "catch up by a few percentage points," as Haider says. It will be his last chance to exert influence in Vienna.

His chances aren't half bad. Most Austrians are fed up with their grand coalition, a wheeling and dealing group of politicians dominated alternately by the center left and center right. The current government's approval rating has dropped to 20 percent. On July 7, Wilhelm Molterer, head of the conservative Austrian People's Party (ÖVP), dissolved the coalition, and since then the country has been in the grip of a wild, populist campaign oriented toward the supposed will of the people.

A poll taken just over a week before this Sunday's election.

Suddenly the Social Democrats (SPÖ) have discovered their skepticism about the European Union. They've begun to sound more populist, and in this environment the ÖVP has found trouble defining itself. It has resorted to crude anti-foreigner rhetoric. Despite all these efforts Austria's two major parties can expect to have far fewer seats after Sunday.

The pollsters predict that the winners will be the archetypes of boorish populism: the right-wing bloc, Haider's BZÖ and, most of all, Heinz-Christian Strache's Austrian Freedom Party (FPÖ) -- the same party which once made Haider Austria's second-most-powerful politician, and which he abandoned after a series of embarrassing caprices.

The only problem is that the feared right-wing bloc is no longer a bloc at all, because its leaders -- mutually disappointed former friends --- are now mortal enemies. But the question on most Austrians' minds is whether the two men are sworn enemies for good, or could they work in a coalition if it seemed a right-wing politician had a shot at the chancellorship?

Haider: 'I Have Calmed Down'

On a late summer afternoon, SPIEGEL met with Haider in the Lido Lounge on Lake Wörther, which offers a view of the massive Karawanken Mountains. Haider wore a gray suit. He put his mobile phone on the table and flashed a charming smile. But he looked tired. His tan couldn't hide the wrinkles in his face. Ducks quacked nearby and a train roared past. Haider waited for the noise to settle before explaining how important it was, in this stalemate between the two major parties, that he and his BZÖ present themselves as a "political corrective."

This is the new Haider, a man who seems anxious not to ruin his chances again. He's taken on the tone of an elder statesman, a man who has had governing responsibility for decades -- first in Carinthia, then in Vienna, and now in Carinthia again. At the word "immigration," he pauses and says mildly: "We cannot be an isolated fortress." Pitting Austria against the rest of the world doesn't make sense, he says, because the world is too interconnected.

It's a far cry from noises he's made in the past, campaigning against "imported crime," "lazy riff-raff" and the European Union's Treaty of Maastricht, which he once called a "continuation of Versailles, just without the war."

"I have calmed down," says Haider, who seems less keen on provoking people now.

So does this mean that he would no longer praise the employment policies of the Nazis, as he has done in the past?

No, he says, that is something he would certainly not repeat. Incidentally, he adds, it was never his intent to glorify the Third Reich.

Why, then, did he portray the soldiers of Hitler's Wehrmacht as victims?

He had merely wanted to question the collective condemnation of an entire generation of fathers, he insists.

Now, in this election, Haider says it's important not to treat people with indifference. He's demonstrated this in Carinthia, he says, by fighting off the "catastrophe of inflation." The "man on the street," he argues, benefited from his programs, like rent subsidies, free kindergarten and direct payments to the poor.

"I demonstrated how it works," he says. 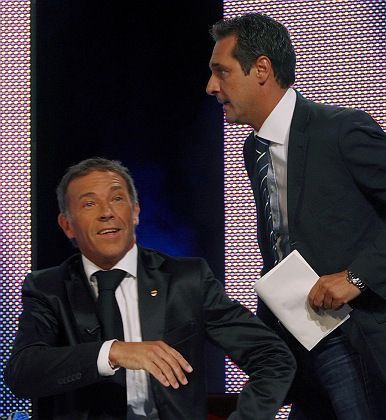 Jörg Haider, left, appears on Austrian TV with Heinz-Christian Strache, right. Together they represent the far right of Austrian politics, and their parties may gain on Sunday.

This line is a deliberate slight against his biggest adversary: Heinz-Christian Strache. Haider, a successful provincial politician, now has to watch his former admirer and protégé pull ahead in every poll. Since Haider left the FPÖ three years ago, Strache -- though intellectually far inferior to Haider -- has captured the public spotlight.

Is he jealous? Does he regret leaving the FPÖ?

Haider shakes his head. No, Strache is merely a copy of him, and he even uses the old campaign slogans. Since his departure, says Haider, no one at the FPÖ has come up with a single new idea. The "original," he insists, is still Haider. He is probably right. But a softer Haider may not reach Strache's voters.

The new FPÖ loudmouth's headquarters is 250 kilometers (156 miles) to the north. In the Vienna office of the FPÖ's faction in parliament, a secretary teeters by in a champagne-colored dress, looking as if she were at a cocktail reception. Young men with gashes in their faces walk around self-importantly. Many FPÖ supporters are active members of Burschenschaften, traditional and often right-wing "fighting fraternities" that teach fencing. Strache himself is a former member of a Vienna fraternity aptly named "Vandalia."

Opening the door to his office, Strache, with a somewhat slimy permanent smile on his face, sits down next to a large palm tree. He's wearing jeans and a sports jacket. Within a few seconds he starts to rage against the "political clowns" in the major parties, the "EU constitution diktat," the "madness of globalization" -- and against Haider. As he bends forward to discuss his rival, his hatred and disdain for the man rise to the surface. Haider, says Strache, is nothing but a "political dwarf" today. "I feel sorry for him." 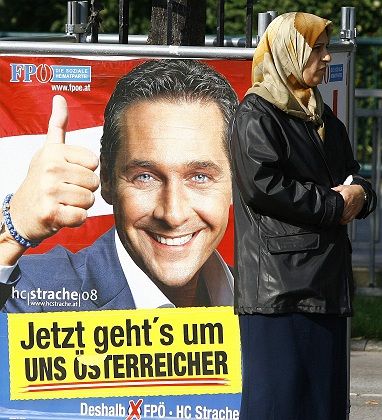 "Now it is about us Austrians:" A woman stands in front of an election banner of the Freedom Party in Vienna.

Strache is trying to erase his own wild history, including his involvement in paramilitary exercises with known right-wing extremists. He says he would like to become Austria's interior minister in the near future. The ambition is not absurd. This 39-year-old dental technician may do very well in Sunday's election. Polls say the FPÖ could capture almost 20 percent of the vote. Together, the two like-minded enemies could garner almost as many votes as either the SPÖ or the ÖVP. Pollsters expect each of the three groups to capture between 25 and 28 percent of votes.

Those results could make Strache a kingmaker, the key to a coalition. Was reconciliation with his former role model possible? Would it be, perhaps, a strategic necessity? Strache shakes his head. Haider, he says, would sell "his own grandmother" for his political ambitions. No, he says, he's had enough of liars and cheats.

The FPÖ launches its campaign Friday afternoon in Linz, once Adolf Hitler's favorite city. Strache mounts the podium, his hair looking wet with gel, and waves a flag sporting the national colors, red, white and red, in time to the music. Then he launches into a speech. The "gentlemen" from the SPÖ and ÖVP have pursued policies directed against the Austrian people, he says. They've left Austrians to deal with their own problems. The supposed representatives of the people are in fact "traitors of the people," he says.

Haider's rhetoric once sounded this way. Now his pupil is the one who loses restraint when, speaking in a furious staccato, he rages against mass immigration. "To get an apartment," he says mockingly, "you just have to wear a headscarf." His audience of about 2,000 people -- young men with tattoos on their calves and blondes in skin-tight jeans, but also retirees carrying their checkered shopping bags -- applauds enthusiastically. FPÖ supporters standing behind Strache hold up small signs that read: "The Homeland Needs the Middle Class," and "Asylum Fraud Means a Flight Home."

Strache's tone is meant to attract reluctant voters. Many of those who respond to populist rhetoric have long felt left out by the major parties. They live in welfare apartments, they're unemployed, or they're simply blue-collar workers -- ordinarily the SPÖ's classic clientele.

There is growing fear within the major parties that Haider, the old demagogue, and Strache, the new one, may form a pact after all, bundle their votes together and, as a result, become an even bigger factor in the Alpine country's political power structure.

The FPÖ is still opposed to such a pact. When asked about it in his Vienna office, Strache motions dismissively with his hand. He is the only representative of the third camp worth taking seriously -- end of story, says Strache.

Haider, at least, has indicated a willingness to make amends. Their main adversary, he says, is the current conservative and social democratic coalition government. But doesn't the public contempt coming from his former ally Strache hurt?

With almost a mild expression, the governor gazes out at the shimmering lake and says, quietly: "After all, I know him well enough." To prevent his worst nightmare, a new grand coalition, from coming about, Jörg Haider is willing to forget almost anything.