The calls from mission control fade away -- they've fallen on deaf ears due to a technical problem. Once again, it's those cursed headphones. They have slipped out of place and astronaut Daniel Schildhammer, who is supposed to be conducting an exploratory mission, stands there helpless. Which way should he go next? Which samples should he collect? When should he return to base camp?

The 28-year-old materials science student from Innsbruck has a serious problem. His unwieldy plexiglass helmet prevents him from putting his headphones back into the right position. With the astronaut unable to receive any orders, this is the point where he would have had to call it a day if this were a real Mars mission.

But Schildhammer, who at 178 centimeters (5 foot 10 inches) tall and with a shoe size of 43 (US size 9) has the perfect dimensions for wearing a space suit, isn't a real astronaut. In this case, he is able to get help from someone else, because he's on Earth and not on the Red Planet. He is actually shuffling through a cave in Austria's Salzkammergut region. Two assistants are able to easily remove his protective headgear and fix the problem. 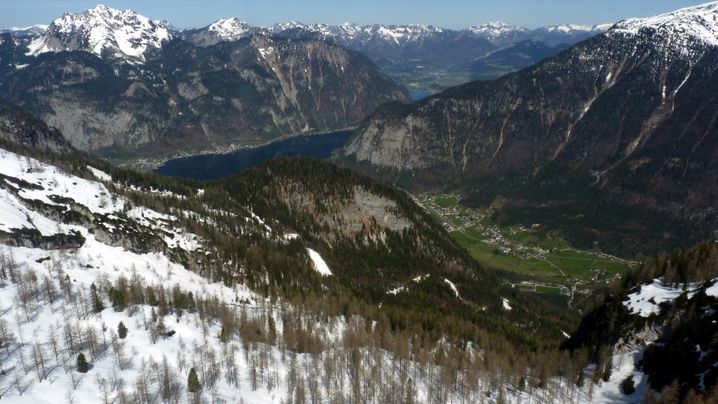 "We have to be grateful for every problem that we encounter here," says Gernot Grömer. "That's because it is happening here and not on Mars." At the Dachstein ice cave, the Austrian Space Forum (ÖWF) is currently testing equipment that is being designed for a possible manned mission to Mars. And Grömer, who normally works as an astrophysicist at the University of Innsbruck, is leading the project at the non-profit ÖWF, which brings together both space professionals and amateurs.

A dozen experiments are being conducted simultaneously in the caves. For example, the Magma Mars rover developed in Poland is navigating an ice surface. On board, it is carrying the Wisdom radar system, which is to be used on the next European Mars mission. The system can be used to analyze rocks at a depth of up to 3 meters (almost 10 feet). "Here in the ice, we can even examine as far as 10 meters deep," says project worker Stephen Clifford of the Lunar and Planetary Institute in Houston.

Without a doubt, though, the most spectacular test object is the "Aouda.X" Mars space suit. Tester Daniel Schildhammer is currently making his way in the space suit simulator through a giant cavern that is dotted with rocks. The shining silver suit, which weighs 45 kilograms (around 100 pounds), is also one of a kind, and is named after a Jules Verne character. In his classic novel "Around the World in 80 Days," the book's hero, Phileas Fogg, falls in love with the Indian princess Aouda.

But Schildhammer is clearly a long way off from being able to move as quickly as the novel's hero. Rubber expanders in each joint of the space suit make every movement laborious. "It's quite tiring if you do it for a longer period of time," he says. The bulky suit would even be a burden on Mars, despite the planet's gravity, which is weaker than Earth's. Still, if Schildhammer gets tired, he can always get a boost by drinking water through a special mouthpiece. A so-called "Uridom" in the lower part of the suit ensures that whatever Schildhammer takes in, he can also let out.

A Spectacular Stage for a Live-Scale Test

The would-be astronaut has just pulled an electric drill and a drill bit out of a small toolbox he is holding near his chest. He plans to use the tools in a simulated drill for samples in a rock. The cave is a spectacular stage for the large-scale test. Around 13,000 cubic meters of ice are located in the Dachstein ice caves. The oldest sections of ice are up to 500 years old. So why are the experiments being conducted here? Is it because of the photogenic backdrop that will surely impress both journalists and tourism executives?

No, says Grömer. "We've known for some time now that there are caves on Mars. And if there actually was life on its surface once, then they would have been the ideal places to retreat to." In astro-biological terms, there is certainly something to that: Cave systems, with their constant temperatures, elevated levels of humidity and, in particular, the protection they offer from cosmic radiation, seem the perfect refuge for simple life forms seeking a retreat. Still, the impressive images Dachstein has to offer were certainly a very pleasant side-effect for all the stakeholders.

As Schildhammer fights his way through the cave, mission control monitors his every step. The data is transmitted via a clunky antenna and a specially installed radio network to a simulated ground station, located just a few minutes downhill by foot in a room adjoining a tourist restaurant. The numerous computer screens don't seem to fit with the wooden décor and checkered drapes.

The people here aren't interested in the fantastic view of Lake Hallstatt that usually gets the tourists excited. Instead, they are focused on CO2 values, temperatures and humidity. A camera mounted on Schildhammer's helmet also broadcasts what he can see in front of him in the cave.

Given the extreme distance between Earth and Mars, it can take up to 26 minutes for a radio signal to travel between the two planets. With such large delays between communications, it is extremely important that the astronauts have as many intelligent support systems as possible in their space suits for times when they must undertake a mission on their own.

A Question of Money

This is where the developers of Aouda.X believe the strength of their product lies. They are one of four teams around the world that are currently developing prototype space suits for Mars missions. The United States' NASA space agency recently tested the NDX-1, which is being developed by the University of North Dakota, in the Antarctic. Each team has different areas of focus. The NDX-1 is pressurized, the Massachusetts Institute of Technology's "Biosuit" places an emphasis on ergonomics and the Austrian space suit focuses on the interaction between man and machine -- with the aid of advanced voice recognition technology, for example.

"The suit in its current form wasn't conceived for survival in space," says Alexander Soucek, one of the flight directors in the control room. Soucek, who studied law, usually works at the European Space Agency's Rome-based Center for Earth Observation. "The idea here is to be able to conduct research on Earth as it would be done on Mars," says Soucek. He says he has no doubt that humanity will one day travel to Mars. "Perhaps in 10 years, perhaps in 100 years, perhaps in 1,000 years."

Among the 50 participants in the field tests, many are certain that it is only a matter of time before a manned flight to Mars takes place. Yet despite the effective publicity that simulations like Dachstein or the Mars 500 project offer, the euphoria of the Moon landing era has long since evaporated. Industrialized nations have greater problems at the moment than the challenge of sending humans to distant planets. The Europeans, for example, are already having difficulty scraping together the contributions expected of them for the International Space Station at the end of the decade -- let alone booking a ticket for an international trip to Mars.

Even robot missions to Mars are starting to feel the pinch of austerity measures. This August, the NASA rover Curiosity is scheduled to land on Mars -- but the landing will be the end of things for now. The cash-strapped Americans have cancelled their participation in the joint trans-Atlantic ExoMars project, and it remains doubtful whether the European Space Agency can continue the project working together with the Russians instead.

Perhaps a wealthy individual in the private sector will undertake the task at some point in the future. For his part, Grömer remains very realistic about the role his project will play. He believes it is unlikely that the first visitors to Mars, if a manned space mission is ever conducted to the planet, will be wearing a space suit made in Austria. But the astrophysicist hopes, in all modesty, that the project can perhaps provide a few helpful lessons about the caves on Mars.

After he retires, he says he would "like to sit in front of a 3D television, watch an almost live broadcast from Mars and be able to tell my grandchildren: 'I designed the screws.'"