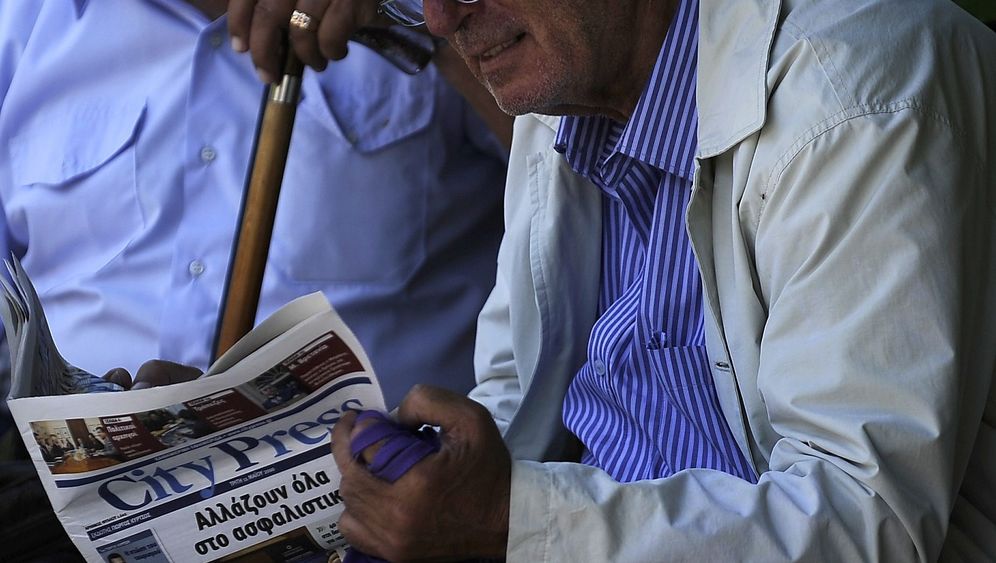 Georgios Trangas is one of Greece's best-known journalists. His two-hour morning radio show "In Athens," which is broadcast nationwide by a private radio station, has a cult following. Day after day, the 60-year-old utters his views and discusses virtually every issue that is important to Greeks, often generating controversy in the process. It's something he's been doing for many, many years.

Trangas is a polarizing figure. Earlier this year, he called for a boycott of German products as a response to the media attacks against Greece coming from newspapers and magazines in Berlin, Hamburg and Munich. He also attacked his own government over its austerity program, demanding unity and warning against a "division of society." With his positions, he has attracted an audience and market share for his radio program that is virtually unrivaled in Greece.

"Two journalists from SPIEGEL are waiting for me outside," Trangas says to his listeners as he ends his show. "What should I tell them?" He raises his voice imploringly and, as an answer to his own question, pronounces two slogans: "Hold your heads up high, everybody" and "stay calm."

The tragic images of last week's violent protests are still fresh in people's minds: firebombed banks and three dead, including a young woman who was four months pregnant. But Trangas doesn't appear particularly glum or moved by the events. He may be a little quieter than usual, but he is just as sure of himself as normal. "We were expecting his," he says, after turning off the microphone, referring to the tragic consequences of the arson attack. "The people are like a volcano."

Trangas is no leftist. He's more inclined towards the right wing of the conservative New Democracy (Nea Dimokratia) party, whose former Prime Minister Costas Karamanlis cooked the deficit figures and fudged statistics that were then bequeathed to his successor, current Prime Minister George Papandreou.

Now the radio personality is sitting at a conference table in the radio station's offices. He's wearing a rugby shirt from a luxury brand and a heavy gold watch on his arm as he discusses corruption in his country. "So much corruption," he moans. Emphasizing the serious moral burden, he theatrically lowers his gaze. "But German companies have profited from this too," he says. "There has been no government contract given to Germany or other EU countries that wasn't highly overpriced because of bribe payments." In other words: It's not just the Greeks who have been the bad guys -- everyone played along and profited from the system. That thinking, at least, makes it easier for people to live with a guilty conscience.

Trangas is an opinion maker, or at least he helps set the tone in his country. As well as his morning radio show, he appears as a commentator on a popular TV news show during prime time in the evening. He also writes newspaper columns and publishes a small Sunday newspaper.

People like Trangas, of whom there are several in the Greek media scene, will be important in the coming weeks. They will to a large degree help determine whether the Socialists under Papendreou get the popular support they need for their radical program to restructure Greece and avert a national bankruptcy. But they are also capable of driving the people into the streets to resist the painful austerity measures. It's the kind of sentiment that created at least one political victim last week, in the form of Dora Bakoyannis, the popular former mayor of Athens.

Bakoyannis, 56, is the daughter of former Greek Prime Minister Constantine Mitsotakis, whose family, together with the Karamanlis and Papandreou clans, have formed the three dynasties of power in democratic Greece. She last served as foreign minister under Karamanlis. But when it came time for Karamanlis to choose his successor as head of the New Democracy party, the liberal Bakoyannis lost out to the right-leaning candidate Antonis Samaras in what is now being perceived as a shift in the party's direction.

During the vote last Thursday on the second savings package ordered by the European Union and the International Monetary Fund, Bakoyannis was the only member of parliament for the opposition New Democracy party to vote in support of the government. Afterwards she was expelled first from the party's parliamentary group and later from the entire party. She is now expected to create a new political party in a bid to shake up the country's traditional party system.

But like the political opposition, radio star Georgios Trangas also seems oblivious to the country's economic reality. In searching for people to blame, Trangas, like many of his fellow Greeks, likes to look beyond the country's borders. "What did European governments really know about Greece's indebtedness, and why did they allow it?" he asks. He says that is a "very important question" for him. It's a question that many ordinary Greeks are also discussing heatedly at the moment.

Spinning Myths out of a Deadly Protest

Trangas is great at posing questions, but less great at answering them. "I don't understand at all how a European politician like Chancellor Merkel could allow the IMF, under the influence of the Americans, into the euro zone," he says. "What business does it have being here?"

But when asked what the alternative would have been, he does not provide an answer but merely says: "The fact the IMF is here and is demanding measures under the influence of the Americans is providing fuel for the protests." Anti-American sentiment, something that has long been very popular in Greece, is flourishing anew these days -- and it is now fuelling the arguments of those who oppose the rigorous austerity program.

The secret of one section of Greek society is to blame others or create myths in order to avoid the harsh reality. For example, people -- including serious journalists, politicians and entrepreneurs -- could be heard everywhere claiming it was actually "provocateurs" who were to blame for last week's arson attacks, rather than irresponsible rioters -- despite the fact that the perpetrators had actually been seen. They also accused the government of being involved, saying it had wanted to discredit the protesters.

What Greece Must Change

But that's just the way Greece is in times of crisis. And that is also what makes even well-meaning observers less inclined to believe that Papendreou's government can achieve success through its seriousness and obstinacy.

At the end of the day, cost-cutting will not be enough. The Greek state needs a massive increase in its revenues, and that will also be a test of character for the country. Greater revenues also means greater honesty when it comes to taxation as well as working to reduce the black market for labor, increasing consumption, stopping the flight of capital outside the country, making the country more competitive, reducing corruption, fostering growth and eliminating the shadow economy. How Greeks address these issues will determine whether the country can turn itself around or whether it has already fallen into the abyss.

As part of that, the Greek government needs to make it understandable to people why the austerity measures and structural changes are needed. Media figures who can get that message across to the general public will be needed. There also needs to be credible examples.

And they do exist, suggests the 50-year-old economist Jens Bastian. He works for the Hellenic Foundation for European and Foreign Policy (ELIAMEP), where he is responsible for research on southeast Europe and Greece. He considers the painful incursions planned by the government to be "socially balanced." For example, he says, the reduction in bonuses given to civil servants, which are equivalent to two extra months of pay each year, is being made dependent on a person's salary.

He says other examples also suggest the government is acting credibly. As an example, he cites the government's action to crack down on thousands of unregistered private swimming pools surrounding the capital city.

In the affluent northern suburbs of Athens, only 324 homeowners have voluntarily registered their swimming pools with the tax authorities. In reality, however, there are known to be 16,974 private swimming pools in Athens' suburbs. But homeowners withhold the information in order to keep the value of their homes artificially low in order to save on property taxes, or, in some cases, because they have been built illegally. The government has now said it will reassess the value of those properties -- and most homeowners can expect hefty additional tax bills.

'Greece Is Far Too Expensive'

Another decisive issue for the success of the restructuring program is whether the Greek government can generate new and lasting growth. But in that regard, too, Bastian, who has lived in Greece for 13 years, is also optimistic. He sees considerable potential in the planned liberalization of the labor market.

In Greece, many professions considered to be self-employed, including architects, lawyers, doctors, pharmacists, taxi drivers and transport companies, are "organized in a cartel-like manner," Bastian says. "They were closed professions." These barriers will now be "removed," he says, something that will create "future opportunities for young people" and greater competition.

"Until now, it has been cheaper to get a container filled with construction materials from China to Athens than it was to transport one from here to Rhodes," explains architect and construction entrepreneur Gerasimos Drimaropoulos.

The country has also "strongly neglected" to secure foreign direct investment since 2004, says Bastian. The economist sees great opportunities in that area. The precondition for that, however, is that Greece finally pay its overdue bills.

On top of all that, the country needs to become cheaper. "Greece is far too expensive," Bastian says. "That is the everyday experience of Greeks, and also of foreign tourists." He says that prices are starting to move now, and he predicts that there will be a clear "downward adjustment of prices" in the coming months.

Those are the kinds of forecasts that radio host Georgios Trangas likes to hear. He believes his country mainly needs two things: time and confidence. "The Greeks are fighters," he says. "As a rule, they are successful in difficult times." Whether that applies in this case too remains to be seen. 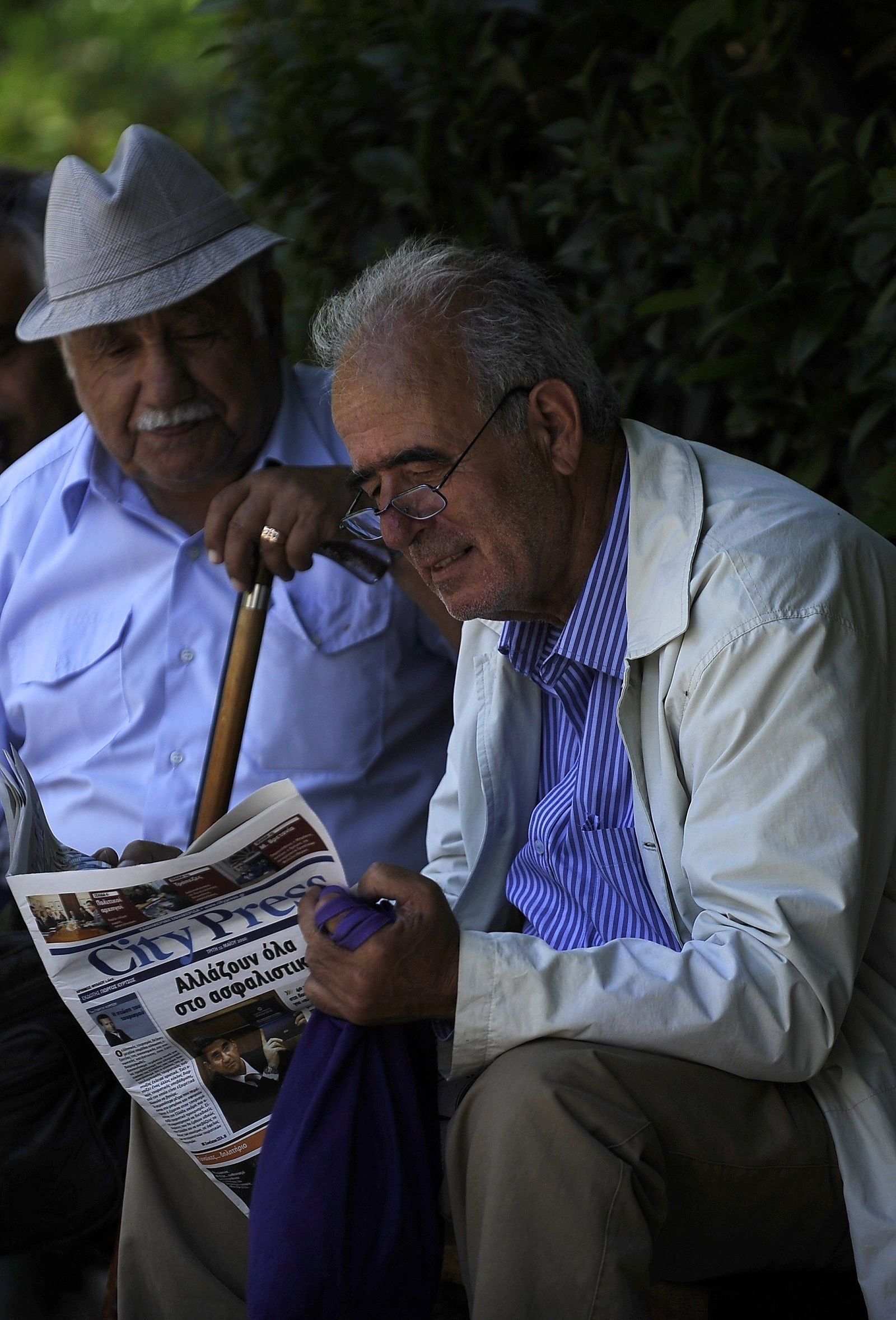 Greek pensioners reading a newspaper: Anti-Americanism is flourishing in the crisis-plagued Mediterranean country.