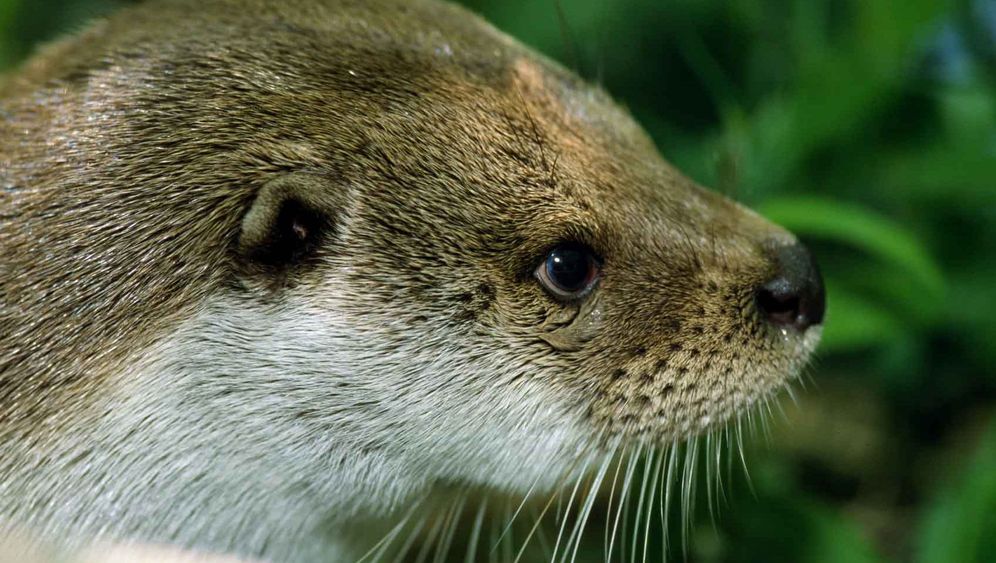 Photo Gallery: The Return of the Invisible Fish Thief

Alena is asleep, or maybe not. "She can probably hear us," says Susana Freire, pointing to the center of a stack of wood. A tractor chugs past. It is not exactly quiet here, right on the main road, but Freire still doesn't want us to move closer: We might frighten Alena away.

Alena is a European otter and Susana Freire is a biology student at Lisbon University. We are in Niederdorf, in the Austrian Laming Valley, a sleepy but idyllic region. In the north the chalky peak of the Hochschwab mountain forms a backdrop for clichéd tourist snapshots.

Since last spring, the region has also been the focus of a unique research project. The Lutra Lutra, the European otter, has returned to the area -- and no one knows why. Scientists, with Alena's help, now want to get to the bottom of the mystery.

Alena, a female otter weighing in at more than seven kilos, has been providing scientists with clues since May when she wandered into the trap of ecologist Andreas Kranz. Following her capture, vets implanted a transmitter into her abdominal cavity. Ever since, Kranz and his colleagues have been able to track her every move and have been able to answer a number of questions such as: How big is the European Otter's territory in an Alpine region? Where do they prefer to hunt? And, where do the nocturnal predators spend the daylight hours?

At present, Alena prefers to sleep in a pile of cut timber: "The otter is very secure there," Andreas Kranz explains. Despite her proximity to people, and dogs, Alena sleeps between the thick tree trunks hidden from it all. If she does have reason to flee, the Laming river is only two leaps away, and otters are impossible to catch in the water.

European otters live in hiding. Usually, no one pays attention to them: after all, they are rarely sighted. Experts however have worked out exactly how the creatures reveal their whereabouts: A good kilometer upstream from Niederdorf, Andreas Kranz stops his car and and walks down the embankment to the river. The ecologist points to a rock covered with algae and moss. On the surface there is a strangely bare patch as well as something brown: Otter excrement.

"That is our gold," says Kranz, grinning. The mess includes fish bones, scales and vertebrae. Experts use the remains to work out the diet of the secretive animals. The other stones are left unsoiled and the vegetation is intact. The otter uses specifically placed excrement as a marker: a warning to others to keep out.

But Alena herself isn't particularly welcome either. People living nearby have a mixed reaction to the return of the otters. Many in the valley believe that the animals have been re-introduced as part of a money-saving ploy by an investor who plans to build hydroelectric plants in the region. Local myth has it that the otters will reduce fish stocks, meaning that the investor will have to pay less compensation to leaseholders. It is not true, but it does little to boost Alena's reputation.

Otters on the Brink

For generations, humans have hated the cute-faced otters because they were regarded as fish thieves. The animals were poisoned, shot and caught in traps. The aim was to make them extinct. But it wasn't until the start of the twentieth century that the otter population began to shrink rapidly in large areas of Europe. Their demise was thought to be unstoppable.

Switzerland declared otters a protected species in 1952. But despite the hunting ban, the otter community failed to expand. Canton after canton said they were otter-free. The last traces of the animals were found at Lake Neuchâtel in 1989. Since then the lutra lutra has been considered extinct. And the agile swimmer fared little better in Germany. In the former West Germany, its population also plummeted. It was only in the eastern states of Mecklenburg-Western Pomerania, Brandenburg and Saxony that the animals thrived.

Experts are divided on the reasons for the otters' vanishing act. Differing theories blame water pollution or the straightening of streams and rivers for driving them away.

Andreas Kranz believes that the otters' return is due in part to a more plentiful food supply. Thousands of artificial ponds and fish farms provide a rich source of sustenance for the animals. Several times a year, fishermen put extra fish into the water -- a trend which is certain to be popular with Alena and her peers.

Kranz also points to the near-ideal conditions for otters to reproduce. That success can be pinned on the European Union's stricter environment protection standards: the concentration of the fertility-reducing chemical PCB has sunk sharply in many places. An otter-hunting ban has also contributed to the comeback.

Irene Weinberger, a doctoral candidate at Zurich University, and Susanna Freire are looking for signs of otter life on a cloudy afternoon. Given the thick undergrowth, it is easiest to wade through the river. A trout floats downstream, suggesting that otters probably live here too.

But the scientists halt at one moss-covered bank. A flat stone in the water is covered in otter excrement. "This is a perfect place," says Irene Weinberger, who plans to set up an otter trap here. In the next few weeks the otter team wants to capture more animals and tag them to monitor their movements. After all, Alena provides good information but is only one animal. More information is needed for their scientific study.

Shortly after darkness descends it starts to rain. Irene Weinberger has returned to Niederdorf to try to find Alena. About 200 meters downstream from the hide the tagging system locates her. It starts to make a quiet ticking noise. But Alena is moving away, fast. She is probably swimming down the river and it is impossible to keep up with her, even running down the street.

Weinberger stops on a bridge. Alena appears to be sizing up the area. She has stopped moving. The river flows fast into the dark forest. Suddenly the ticking noise gets louder: The animal is getting closer. But the excitement quickly fades as the ticking subsides again. Alena the Invisible has made off into the night.