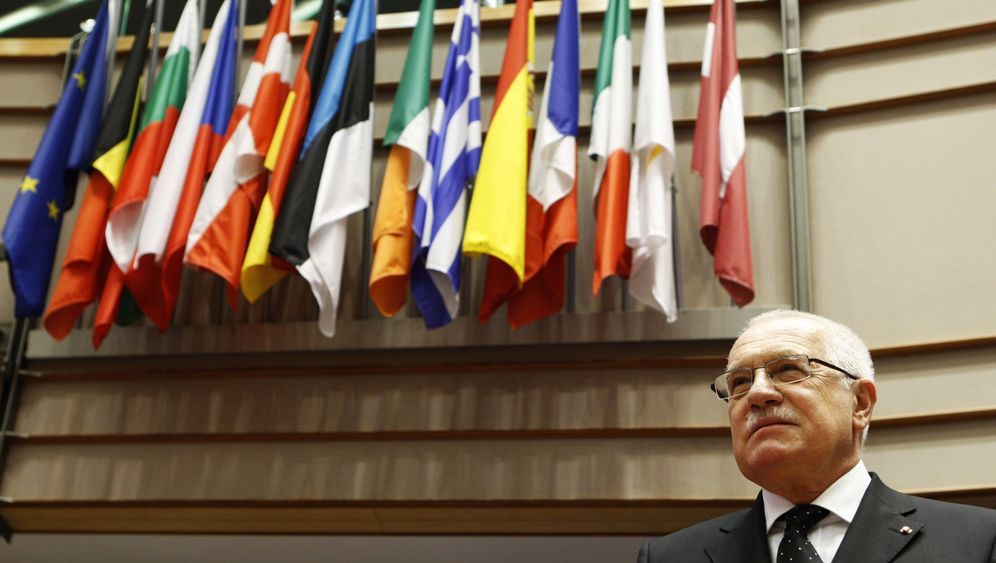 An interview earlier this month with outgoing Czech President Vaclav Klaus was routine: spiteful, hysterical, and disparaging of his predecessor, the late poet, playwright and dissident, Vaclav Havel.

In a discussion with the Polish weekly Rzeczy, Klaus ridiculed the widely admired first president of the Czech Republic as promoting "Havelism" while in office. Havel's governing philosophy, Klaus explained, was similar to Jacobinism, the murderous ideology of the 18th century French revolutionaries which ended at the guillotine. Klaus' outburst earned him a rebuke from the Czech chapter of PEN International, which asked him to stop "dirtying" his predecessor's memory, as well as from former dissident and Defense Minister Sascha Vondra, who correctly pointed out that had Havel really been a Jacobin, Klaus -- Havel's long-time political nemesis -- would have been decapitated.

"Havelism" is but the latest creed coined by the controversial Czech president, who has generously appended the suffix "ism" to a variety of phenomena he detests: "humanrightsism," "NGO-ism" and "homosexualism," in addition to railing against more recognized movements like environmentalism and "globalism."

As he departs office on March 7, Klaus leaves behind a contentious legacy as the most influential Czech political figure of the post-communist period next only to Havel, who died in December of 2011. Known internationally for his denial of anthropogenic climate change and fiercely critical stance against the European Union, Klaus is credited, even by his detractors, as playing a constructive role in the peaceful dissolution of Czechoslovakia and the privatization of the Czech economy in the early 1990's when he served as prime minister. In light of the "other post-communist federations that fell apart in a more violent way," Jiri Pehe, a former Havel advisor, says, his leadership during the "Velvet Divorce" that led to the independent Czech and Slovak Republics is "no small thing." Robert Kron, an analyst with the Center for European Policy Analysis in Washington, credits Klaus' early 90's voucherization policy that privatized public industries as "yield(ing) a society that began to learn capitalism."

A Man Given to Contrarianism

But Klaus' decade in the presidency, marked by his frequent testing of the job's constitutional limits and outbursts on matters ranging from gays to global warming, more accurately capture his influence and character. Forced to step down as prime minister over a party financing scandal in 1997, Klaus remained in parliament and succeeded Havel as president in 2003. Not content with merely carrying out the duties of the largely ceremonial post, he used his newfound visibility to revamp himself as a public intellectual on the world stage. He published a book on the subject of global warming, "Blue Planet in Green Shackles," and challenged former US Vice President Al Gore to a debate. In 2009, despite approval from the Czech parliament and a constitutional provision mandating his signature, he delayed his approval of the EU Lisbon Treaty until a provision was added prohibiting the descendants of Germans expelled from Czechoslovakia after World War II from reclaiming their property (Klaus has compared the EU to the Soviet Union, and recently instructed Czech military officers that they must defend the country "against unification tendencies in Europe").

So given to contrarianism is Klaus that even his eulogy of Havel (an awkward speech given the men's mutual enmity) caused some listeners' eyes to roll. "(Havel) also played an important role through the concrete steps he took so consciously and decisively to support those of us who did not see in 1989 simply another 1968 or another attempt to create socialism with a human face," Klaus said before the audience of assembled international dignitaries. Paul Wilson, the Canadian translator of Havel's works, later remarked that, "It was as though Klaus, aware of the momentousness of the occasion, were reserving a top spot for himself in an eventual rewriting of history. In that sense, he was true to form."

While Klaus has gained notoriety for the things he's said, it is often the things he doesn't say, or that his closest of aides say, which generate the most controversy. Deputy Chancellor Petr Hajek, Klaus' right-hand man, for example, has claimed that the 9/11 attacks were the work of the American government. Following Osama bin Laden's assassination two years ago, Hajek declared that the al-Qaida leader was a "media fiction." In a book published last year on the 23rd anniversary of the Velvet Revolution, "Death in Velvet," Hajek wrote that Havel "served as a tool of Satan" spreading "hatred and lies" (Klaus endorsed the book). When Hajek denounced homosexuals as "deviant fellow citizens" before Prague's first gay pride parade in 2011, Klaus defended the term "deviant" as "value-neutral."

Perhaps no episode was more infamous than that of Klaus' stealing a pen during a signing ceremony with his Chilean counterpart in 2011. Video of the event went viral around the world. But while the pen-snatching incident earned laughs, it also seemed to embody a man whose blunt speaking and often bewildering behavior has made him one of the most divisive figures in European politics.

A 'Dr. No' Philosophy

"He has a 'Dr. No' philosophy, seeing external forces with skepticism, asking 'How do we protect our interests against the encroaching foreigner?'" Kron of the Center for European Policy Analysis says of Klaus' worldview. Such attitudes, which former Havel advisor Pehe believes have drifted from mere euroskepticism to outright "europhobia" over the years, skilfully play upon popular feelings in this small land wedged between large and historically aggressive neighbors, doubly occupied in the 20th century, and repeatedly betrayed by its putative allies.

"The Czechs, as a nation, are very provincial and very bourgeois and Klaus fits this profile perfectly," Pehe says. Whereas Havel spoke to the world with his plays, essays and appeals to a common humanity, Klaus is a "sort of leader who was much more in tune with what the Czechs think than Havel." Klaus has disparaged the Czech dissident movement in a way that assures Czechs -- the vast majority of whom went about their lives during the communist era and did nothing to oppose the regime -- that they have nothing to feel guilty about. He has similarly downplayed Western efforts at bringing about the collapse of the Soviet Union. "The West's policies toward Eastern Europe, the Helsinki Process -- none of that really helped us," he told SPIEGEL in an interview in 2006. No doubt envious of the acclaim his predecessor earned, Klaus has ironically fashioned himself as a dissident in the Havel mold with his stands against European integration and likening of climate change to a communist conspiracy.

Klaus demonstrated his penchant for populism in the country's presidential election this January, when he weighed in on the side of left-wing former Prime Minister Milos Zeman over the center-right Foreign Minister Karel Schwarzenberg. After Schwarzenberg criticized the country's post-war expulsion of ethnic Germans, Klaus coyly remarked that his successor should be someone who has spent their entire life in their homeland (Schwarzenberg's family fled Czechoslovakia following the 1948 communist coup; he lived in exile in Austria). Klaus' family joined in the attacks; his wife stated that the first lady ought to speak Czech (Schwarzenberg's wife does not) and Klaus's son alleged that Schwarzenberg's father was a Nazi collaborator (it has since emerged that Klaus' father-in-law was an official in the Slovak fascist regime).

Though Klaus' effective endorsement of Zeman (who proved victorious) might have seemed odd given that the men represent the opposite poles of the political spectrum, it was emblematic of Klaus' deeply personal political style: not only does Schwarzenberg's internationalist and cosmopolitan political outlook jar with Klaus' chauvinism, but Schwarzenberg was a close friend and ally of Havel. (As if to stress the cynicism behind his intervention, Klaus reassured the press after Zeman's victory that the incoming president remained his "old and eternal enemy" and that he "disagrees with almost every statement he has ever made.")

In his 25 years in politics, it is hard to find a single geopolitical issue on which Klaus' position has differed from that of Russia, the country that brutally invaded Czechoslovakia in 1968 and occupied it for 20 years. Kron attributes this affinity to Klaus' "very pragmatic and economic and not ideological or emotional-based approach" to politics, which stands in stark contrast to the views of Havel, who was deeply suspicious of Russian influence, particularly once Vladimir Putin rose to power at the turn of the century. "He sees the only advantage of European integration in economics," says Pavol Szalai, a Slovak political analyst. "Anything that's political in the EU is like the Soviet Union."

But strangely for a free-market enthusiast constantly likening anything he disagrees with to resurgent communism, Klaus has been very warm with the revanchist government in Moscow. Klaus opposed the NATO bombing campaign in Yugoslavia to prevent genocide in the Balkans and has long been against independence for the former Serbian province of Kosovo, in contradiction to official Czech government policy. When war erupted between Russia and Georgia in 2008, and as a series of leaders of former Soviet bloc countries vocally sided with Tbilisi, Klaus was outspoken in his support for Moscow, once again putting him at odds with the Czech government position. And at a Russia-EU summit the following year, Klaus said that the regional body should pay greater attention to the concerns of Russia at the expense of "small Estonia or Lithuania." In 2007, Klaus was awarded the Pushkin Medal on behalf of Russian President Vladimir Putin for his "helping to spread the Russian language and culture."

Throughout his 10 years at the helm, and despite his frequently controversial statements, Klaus remained generally popular and trusted among Czechs. That was until his surprise announcement, however, of a far-reaching amnesty on Jan. 1st. Klaus' decree freed all those prisoners serving sentences of less than a year, people sentenced for non-violent crimes with less than two years remaining in their sentence, and individuals over the age of 70 whose remaining jail terms are less than three years -- some 7,000 prisoners in all. Most troubling about the amnesty was a provision that cancelled ongoing criminal proceedings of 8 years or longer in which the defendant faced less than 10 years in jail. This measure ended a number of serious embezzlement and fraud cases originating out of the "mafia-style" capitalist days, as Havel termed them, which Klaus presided over as prime minister in the 1990's.

Ultimately, this move may produce what will likely be the most lasting aspect of Klaus' legacy. Almost immediately after the amnesty was announced, mayors and school principals across the country began to remove Klaus' portrait from their walls. A recent survey by the Czech daily newspaper Mlada fronta Dnes found that, nationwide, most schools and town halls have decided to forgo hanging the president's official portrait -- a tradition extending back to the founding of independent Czechoslovakia in 1918 -- altogether. For a man who so relished being the center of attention, it is hard to think of a more punishing verdict.

James Kirchick is a fellow with the Foundation for Defense of Democracies and the Robert Bosch Stiftung. He was formerly writer at large with Radio Free Europe/Radio Libery based in Prague.
Mehr lesen über
Czech Republic
Verwandte Artikel