How much longer will the euro zone be patient with Greece? A growing number of politicians and economic experts are criticizing the rescue packages for the overly indebted nation and are instead demanding that Greece be allowed to slide into insolvency. Paris and Berlin continue to hold back. But, to be on the safe side, they are already preparing their domestic banks for a possible Greek default.

In Germany, Chancellor Angela Merkel of the conservative Christian Democratic Union (CDU) has been clear in her support of this position. On Wednesday, together with European Commission President Jose Manuel Barroso, she announced her preparedness to support a bank bailout. Following a meeting of the heads of the most important international economics and financial institutions, the chancellor reiterated her position on Thursday, saying that if banks urgently need money, the European states should "not delay" in providing financial aid. That, she said, would be "intelligently invested money."

Behind this week's string of announcements are growing concerns that the European debt crisis is spreading and could soon threaten to engulf major banks, many of which still hold a good deal of Greek government bonds and even more Spanish and Italian securities on their books. Many banks would likely be unable to withstand a national insolvency inside the euro zone. They would be forced to write off billions, and some could face bankruptcy themselves as a result. Trust has diminished to such a degree in recent weeks that interbank lending has dried up, creating a credit crunch not seen in Europe since the 2008 collapse of Lehman Brothers.

More than anything, though, the threat of a Greek bankruptcy has risen significantly. The Greek economy has collapsed, and the country has once again failed to meet its austerity targets. Patience is now dwindling among the other euro-zone member states that have been stepping up to rescue the country.

Voices calling for an orderly insolvency in Greece are growing. Within the euro zone, this position is most pronounced in Slovakia. But there are also critics within the German government, a group led by Philipp Rösler, the head of the business-friendly Free Democratic Party (FDP), the junior partner in Merkel's coalition. The faction of supporters of insolvency is also growing among economists. Thomas Straubhaar, director of the influential Hamburg Institute of International Economics, for example, has stated that a system needs to be created that would permit a euro-zone country to go through bankruptcy proceedings. The problem, however, is that so far no one has been able to say how, exactly, an orderly insolvency would proceed.

The consequences could be disastrous for banks. Private financial institutions only recently agreed to write off 21 percent of the value of the Greek government bonds they possess. In the event of an actual insolvency, the losses would be significantly higher -- with many experts predicting banks would have to write off half of their entire Greek bond holdings.

German financial institutions would likely survive a Greek collapse. Data from the recently published stress test indicated that the country's biggest banks -- Deutsche Bank and Commerzbank -- still held Greek securities valuing a total of €1.7 billion and €3 billion, respectively, at the end of 2010. But the banks have already written off a large share of those holdings as losses. Deutsche Bank has stated that the current volume of its Greece portfolio is around €900 million and that all of its Greek securities have already been written down to their current market value.

"A debt haircut for Greece might be uncomfortable for German banks, but they could cope with it," said Dieter Hein, a banking analyst at independent research institute Fairesearch. The outstanding volume, he said, is no longer high enough to endanger the two banks.

Unfortunately, the problems stretch well beyond two German banks. A Greek insolvency would hit French banks harder and would be catastrophic for financial institutions in Greece. The largest Greek bank, the National Bank of Greece, held close to €19 billion in Greek government bonds on its books at the end of 2010. If forced to write off 50 percent of those securities, the bank's equity capital would vanish in its entirety.

The second problem is potentially even graver. What happens if the pressure created by a Greek insolvency further increases the pressure on other highly indebted nations -- such as Portugal, Spain or Italy -- and drives them to bankruptcy? Under that scenario, there's a good possibility the contagion would become unsustainable for German banks, too. The state would have to infuse them with fresh money in order to rescue the financial institutions from ruin, just as the German government did with Commerzbank following the Lehman Brothers collapse. Only this time around, even more banks would have to be rescued using state funds -- in almost every country in Europe.

European Banks Would Lose €250 Billion in Own Capital

Even so, that might ultimately wind up being cheaper for taxpayers than the ongoing support of indebted states. That, at least, is the belief of German economists Harald Hau and Bernd Lucke, who have calculated a comprehensive scenario for what a wave of bankruptcies in Europe's banks could mean. Under the scenario, Greece and Portugal would undertake a debt haircut of 50 percent, with Italy, Spain and Ireland each eliminating 25 percent of their outstanding debt.

Under the scenario, European banks would lose more than €250 billion in equity capital, which would have to be replaced by government infusions. In Germany, around €20 billion in government money would be needed to shore up the banks. Deutsche Bank would require €3.7 billion and Commerzbank around €6 billion.

Together, the euro-zone economies would also have to cover the losses at financial institutions in the countries that went bust -- a figure the economists estimate to be at around €180 billion. As Europe's largest and most solvent country, Germany would have to foot a large portion of that bill.

But the economists still believe it would be cheaper to provide banks with fresh capital than to continue providing ongoing rescue packages for overly indebted countries. In addition, since governments would be given shares of the banks in exchange for the aid, taxpayers would not be left alone to carry the costs of the crisis.

"If the recapitalization is executed at market prices -- in other words, based on the current share price -- then the losses from the expected debt haircut will be carried by the old shareholders," said Hau, who teaches economics and finance at the University of Geneva and at the Swiss Finance Institute. "Initially it would cost taxpayers nothing because they would be given valuable company holdings in exchange."

There would, of course, be one exception: If a bank's losses became so high that they drained their capital entirely, then taxpayers would first have to replenish their equity capital. "Then there would be an actual loss, and there's no way around that," Hau said.

By Hau's calculations, that would apply to only one bank in Germany -- Hypo Real Estate, which he estimates would require around €500 million in capital. Losses of around €30 billion would be expected in the banks in the worst-hit crisis countries.

Hau is convinced that this path is the best one to take. "The bailout package merely protracts the solution to the crisis, but a debt haircut would at least be the beginning of a solution." He also believes his proposal would be fairer. "With a debt haircut, around 80 percent of the costs would be carried by actors in international finance -- from private investors, funds and insurance companies," he said. "Taxpayers would be hit less hard."

As good as that may sound, considerable uncertainty remains over the side effects a debt haircut strategy might have. How long, for example, would banks continue to have to rely on state support? And would governments ever be successful in selling their shares in the banks?

Nevertheless, in the event of state bankruptcies, the euro rescue fund would still be needed because it would take time before crisis countries were able to borrow on their own again from capital markets. Until that time, they would have to be supported by the solvent euro-zone countries. That, it would appear, is unavoidable. 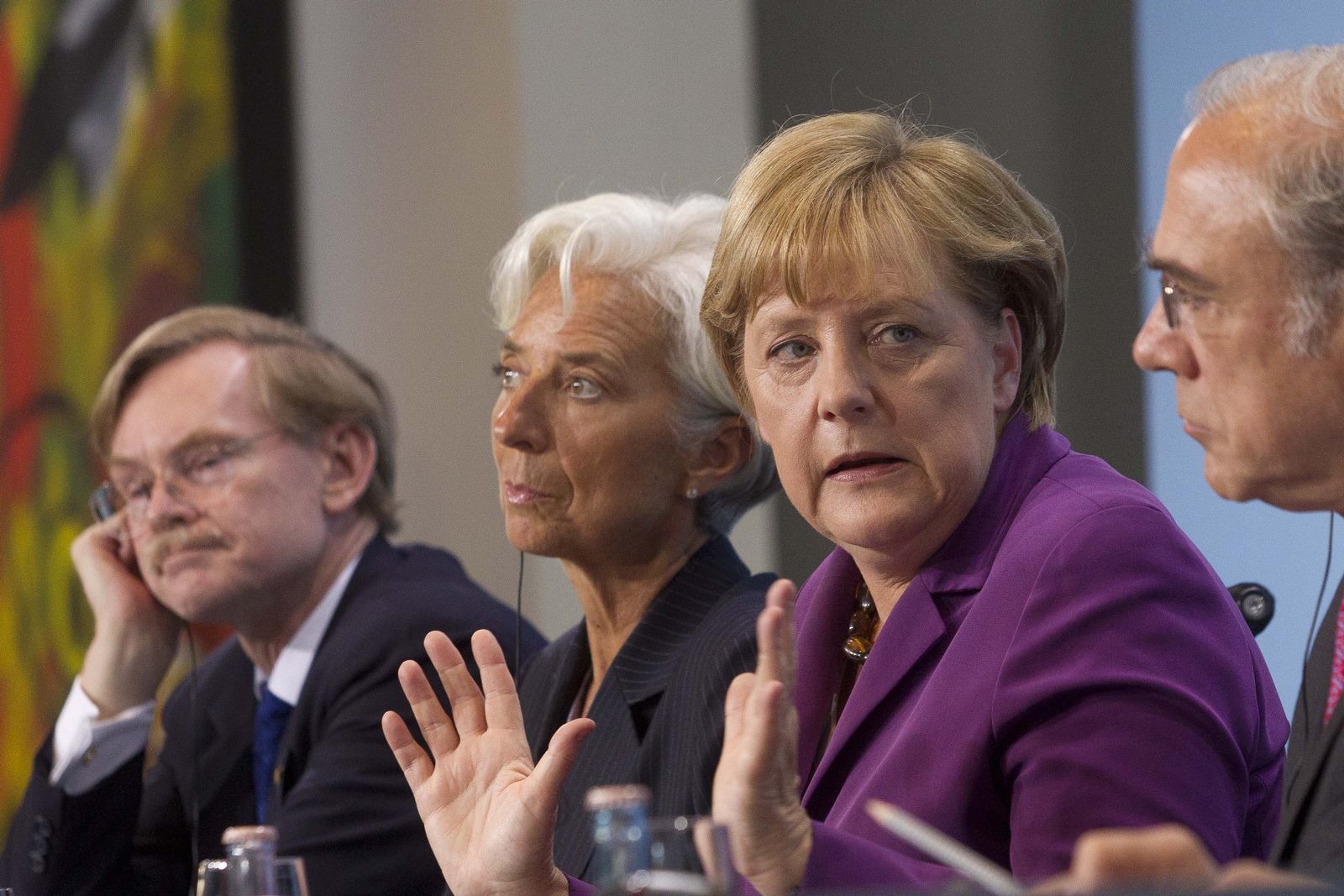