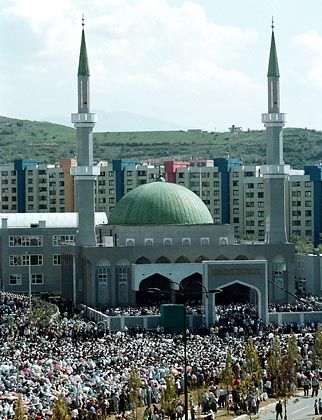 A mosque in Sarajevo: Bosnia has seen a surge in its Muslim population of al-Qaida sympathizers.

Thick iron bars block the entrance to Abu Hamza's store in Sarajevo's Islamic shopping center. Affixed to the bars is a handwritten note: "My Bosnian citizenship has been revoked. I have to defend myself, and for this reason my store is only open sporadically."

Abu Hamza, a bearded 42-year-old man originally from Syria, sits in his store among colorful veils and gold-embroidered tunics and speaks in a gentle voice about Bosnia's fate. He believes that there will be either an evolution of true Islam or a revolution.

Abu Hamza is one of the stars among the missionaries who want to spread a strict interpretation of Islam in Bosnia. He came here in the early 1990s, one of thousands who aided their Muslim brothers in the war against the Serbs. In return, they were given Bosnian citizenship.

This meant that they were "nationalized" and thereby did not fall under the provisions of the Dayton Peace Accords, which stipulated that all foreign combatants had to leave the country. The United States in particular was annoyed by the trick and, under pressure from Washington, a Bosnia government commission revoked the Bosnian citizenship of nearly 400 "suspected mujahedeen of foreign heritage," including Abu Hamza. The suspects are believed to have ties to Islamic terrorists.

American diplomat Raffi Gregorian, deputy high representative for Bosnia, speaks of a growing number of al-Qaida sympathizers in the country. Gregorian works for the Office of the High Representative, the civilian peace implementation agency in Bosnia and Herzegovina.

Terrorism experts fear Bosnia could become a base for extremists, since many Bosnian Muslims have become radicalized through the influence of foreign combatants as well as the charitable Islamic organizations that spread their beliefs with money.

Before the war, women in full-body coverings and men with long beards were a rare sight. Today, though, they hardly turn a head.

Wahhabism is quickly gaining ground in the country, with polls showing that 13 percent of Bosnian Muslims support the conservative Sunni Islam reform movement. The movement is financed primarily by Saudi Arabian backers, who have invested well over a half-billion euros in Bosnia's development -- especially in the construction of over 150 mosques. The 8,187 square meter (88,124 square foot) King Fahd Mosque in Sarajevo alone cost €20 million ($29 million), and it's also where radicals go to pray. 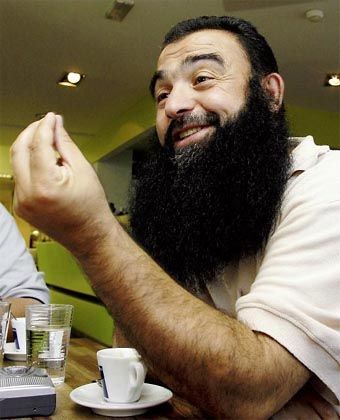 Abu Hamza is one of 400 "suspected mujahedeen of foreign heritage" living in Bosnia.

In trying to transform the country into a theocracy, the new preachers of fundamental Islam aren't just fighting with the Koran. In Kalesija, militant Wahhabis drove out the local imam after a fight between local Muslims and the Wahhabis. In the village of Dedici, residents took up their shotguns to defend their mosque against the attacking fanatics. Recently, the Careva Mosque (Emperor's Mosque) in Sarajevo locked its doors during prayer for the first time in its 441-year history when a group of Wahhabis tried to enter and perform their own prayer rites.

A notorious mujahedeen commune in the remote village of Bocinje, 50 kilometers (31 miles) west of Tuzla in northeastern Bosnia, is considered the birthplace of the religious movement. Shortly before the end of the war in 1995, the mujahedeen unit moved into Bocinje. The combatants occupied the homes of Serbs who had been driven out, and they established a fundamentalist enclave there. Among the high profile visitors who have come to Bocinje is Aymen al-Zawahiri, al-Qaida's second in command.

In 2002, after shooting, fighting and legal injunctions, the missionaries were forced to leave the village. But it is believed that camps still exist in the surrounding woods, where Bosnians are trained as terrorists.

One of the leaders of the Bocinje enclave was Abu Hamza, who says he has faith in the country's youth. They have discovered Islam, he says with a smile, as an answer to the nationalism of the Serbs and Croats. "They see us as an authority," he says. "We protected them during the war, while their politicians were safe in shelters or out of the country."

Abu Hamza is unperturbed when older Bosnians sometimes hold out beer bottles to him tauntingly from their cars. He saw Muslims who drank alcohol die in Srebrenica, he says, and it seems almost as if he sees God's punishment in this fact.

Every day he expects police to come and take him to the airport to be deported, he says. But that day has yet to come. The Bosnian government isn't making any moves and the country's interior minister says most of the 400 suspects can't be found.

People like Abu Hamza have made preparations for the worst. Some foreign Islamic organizations plan to claim those without citizenship as their representatives in Bosnia -- and, as a means of precaution, Bosnian sympathizers have adopted their fellow Muslims.