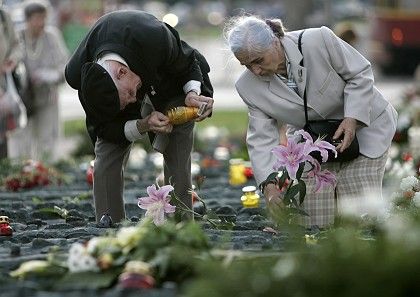 An elderly couple lights candles by the monument dedicated to the victims of Katyn, the Russian forest where thousands of Polish officers were executed in 1940.

A pre-election dust-up threatened to derail the premiere of the most eagerly anticipated Polish film in years, as the government was accused of exploiting a national tragedy for political advantage.

The film, "Katyn," which opens across Poland on Friday, is about the 1940 massacre of some 20,000 Polish officers by the Soviet army. Polish government officials announced just weeks ago that they would move memorial ceremonies up two months to coincide with the release of the film, directed by Andrzej Wajda.

But Wajda -- whose father was killed at Katyn -- and other victims' relatives protested that the move was using their personal pain for political gain. Poland is holding national elections on Oct. 21, and the ceremonies would have been an ideal photo op for the country's nationalist PiS party and its identical twin leaders, Lech and Jaroslaw Kaczynski. "Holding this during an election campaign is about politics," Wajda told the Polish newspaper Gazeta Wyborcza on Wednesday. "I don't want the death of my father and thousands of Polish officers slain in the USSR to serve such goals."

The Katyn Families Federation, which represents the descendants of men killed in the massacre, also criticized the event's rushed timing. The group pointed out that the scheduling of the 68th anniversary ceremonies had nothing to do with the massacre itself, which occurred in April 1940. Families Federation president Andrzek Skapski said the sudden scheduling meant many families would miss the ceremony entirely.

Yesterday, the government reversed course, moving the event back to Nov. 11. In Warsaw's Pilsudski Square, the wide, open expanse in front of the Tomb of the Unknown Soldier was being readied for the ceremony and the stage was half-built when the cancellation announcement was made. Presidential spokeswoman Ewa Junczyk-Ziomecka blamed the media and opposition politicians for the misunderstanding. "Our intention was to connect people, not divide them," she said yesterday. "I would like to apologize to the families who supported the president's initiative."

The Kaczynski brothers have been accused of using Katyn to score political points in the past. On Sept. 17, President Lech Kaczynski made a visit to the massacre site, near Smolensk, the centrepiece of his first-ever state visit to Russia. While then-Soviet leader Mikhail Gorbachev acknowledged the massacre in 1990, Russian officials have since refused to prosecute the perpetrators or recognize the massacre as a war crime. Kaczynski didn't meet with Russian President Vladimir Putin or travel to Moscow during the trip to Poland's largest neighbor.

Despite the controversy, Friday's premiere is expected to be a final tour de force for the 81-year-old Wajda, widely considered Poland's greatest living director. Wajda's films "Canal," shot in 1957, and "Man of Marble," released in 1976, are defining statements of the Polish experience in WWII and under communism, respectively. His docudrama "Man of Iron," about the Solidarity movement, was censored by the Polish government when it was released in 1981; less than a decade later, Wajda was elected a Polish senator as part of a Solidarity government.

Critics have suggested Friday's premiere may be his most personal: Wajda's father, Jakub, was an army captain taken prisoner by the Soviets in 1939 and killed along with thousands of others at Katyn. The mass graves were found in 1943 by advancing German troops, but the Soviets denied responsibility; after the war, Katyn was erased from the history books by communist officials. "I think my film shows how the lie about Katyn was brought to Poland with the Red Army and the communist administration, and how this lie -- that the Polish officers were murdered by the Germans -- lingered for so many years," Wajda told reporters in Cannes in April.

Wajda  who was awarded an honorary Oscar in 2000 and a Golden Bear at last year's Berlin festival  isn't approaching the tragedy directly. Instead, the movie deals with the reverberations of the massacre among the wives, daughters and mothers of the victims. "While it was the men who were murdered, the lie about Katyñ concerned in the first place the women," Wajda said. "This is not to say of course that massacre itself is not present in the film. It is."