Until recently, the job of German ambassador to Switzerland was seen as one for diplomats nearing retirement. The Foreign Office had a tendency to prescribe a few quiet years in Bern to mark the end of a diplomatic career. Switzerland was even referred as the "Florida of diplomats." There isn't much going on there, but the scenery is beautiful, there is excellent skiing and one of the principal social activities is to attend receptions at other embassies.

Perhaps this is what Axel Berg, 57 years old and Germany's ambassador in Bern since last August, had in mind. But so far his job has been anything but cozy. 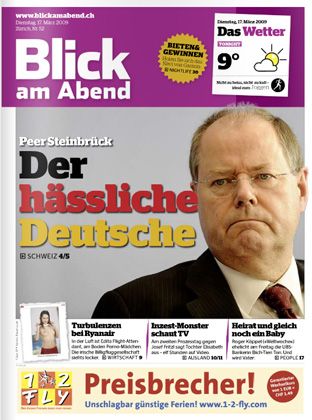 For the second time in five months, Swiss Foreign Minister Micheline Calmy-Rey summoned Berg on Tuesday to the Foreign Ministry to discuss, once again, the government's irritation over comments made by German Finance Minister Peer Steinbrück. The moves highlight the extent to which relations between Switzerland and Germany have cooled in the controversy over tax evasion and banking secrecy. Such frosty diplomatic encounters between the two nations would have been unthinkable until recently. But ever since German politicians, with Steinbrück leading the way, have zeroed in on Switzerland's role as a haven for tax evasion, those once-cordial days are gone. Indeed, the daily tabloid Blick am Abend featured a photo on its Tuesday issue with Steinbrück and the headline "The Ugly German".

Last fall, Steinbrück even threatened to "take a whip" to Switzerland unless it cooperated in the dispute over tax evasion and banking secrecy. In doing so, he unleashed a veritable storm of public outrage among the Swiss. Foreign Minister Calmy-Rey, a Social Democrat like Steinbrück, strongly objected to "this tone" and warned Steinbrück not to address the Swiss as if they were children.

Last week, after Switzerland, responding to massive international pressure, did in fact agree to loosen its banking secrecy laws, he did it again. Steinbrück compared the Swiss with "Indians" that the cavalry had apparently successfully intimidated.

Derision was certainly not the reaction that the Swiss government had expected. The surrender of banking secrecy is a painful process for the country -- not just because of its economic significance, but also because many Swiss consider it part of their national identity in a sense. The government was pleased to see British Prime Minister Gordon Brown welcome Swiss President Hans-Rudolf Merz at No. 10 Downing Street, as a sign of recognition, as well as to hear US Treasury Secretary Timothy Geithner's warm words about Switzerland. Steinbrück, on the other hand, despite Switzerland's accommodating behavior, apparently saw no reason to change his gruff tone.

Swiss television aired the full, unedited version of Steinbrück's rant against Switzerland, training the camera on the finance minister for a length of time that seemed almost masochistic.

Speaking in a tone that many Swiss perceived as arrogant, Steinbrück said that the Organization of Economic Cooperation and Development's threat to blacklist Switzerland was, in a sense, like "having the Seventh Cavalry in Fort Yuma that can be ordered to ride out but doesn't have to. The important thing is that the Indians know it exists. And if this alone is enough to provoke nervousness among those who are asking themselves whether they are likely to be blacklisted, then it's nice to see some air being blown through the chimney."

Swiss Foreign Minister Calmy-Rey, deeply angered, complained on Monday before the National Council, the larger of the two chambers in the Swiss parliament: "These remarks are unacceptable in my opinion. They are insulting and aggressive, with regard to both content and form." Switzerland, she said, has taken an important step toward achieving better international cooperation in the area of taxation. "I would have expected a different reaction from Germany toward its Swiss partners, especially from a country that benefits from its relations with Switzerland on issues such as immigration, cross-border commuters and even the balance of trade."

Last fall, Calmy-Rey told SPIEGEL that Steinbrück was stirring up prejudice against Germans among the Swiss. In the same breath, she mentioned the more than 220,000 Germans now living in Switzerland. It is the most popular country of emigration for Germans. In addition to the diplomatic friction between the two countries, the large numbers of immigrants from the north arouse fears in some Swiss that the Germans are trying to get to their money.

Steinbrück, at any rate, has become a hated figure in Switzerland since making his whip comment. He draws on Swiss fears of the aggressive Teutons like no other, and he seems to relish the role.

To make matters worse, another leading Social Democrat, SPD leader Franz Müntefering, elicited disbelief when he said in late February, referring to countries like Switzerland: "In the olden days, one would have sent in the troops." Militaristic threats involving whips, cavalry and soldiers are not welcome in Switzerland, especially coming from Germany. "It is not difficult to imagine how the Poles would react if a German minister threatened them with the whip," the editor-in-chief of the Sunday edition of the Neue Zürcher Zeitung wrote in an opinion piece.

The harmony-seeking Swiss react with sensitivity to any signs of German aggressiveness. Steinbrück, on the other hand, has a low opinion of harmony, and it was not without reason that he once described the rhinoceros as his favorite animal. The Swiss Social Democrats, who have long fought the country's banking secrecy laws, even felt the need to write a letter to their fellow social democrats in Germany. "Such pronouncements are counterproductive and could slow down the current development," they wrote to "Dear Franz" Müntefering. "We ask that you and Peer refrain from making such statements in the future." Hans Kaufmann, a member of parliament with the conservative, right-wing SVP, is now calling for a boycott of German cars.

The papers are full of letters to the editor. They include such irate language as in the following letter: "How much longer will it be before Switzerland officially punches Steinbrück in the mouth? He ought to solve Germany's problems first." Another reader writes: "None of these disparaging remarks can cover up the fact that Steinbrück is a total failure as finance minister in Germany."

It is clear that Steinbrück distrusts Switzerland's announcements, just as he distrusts Austria and Luxembourg. All that counts now is action, he said last week, adding that there have been many promises that have not been kept. Most of all, however, he wants something more: automatic access to bank data, and not just when the authorities have valid reasons to suspect someone of tax evasion, a stipulation Switzerland and Austria want to include. A spokesman with the German Finance Ministry said on Tuesday that officials there have serious doubts that Switzerland and Austria are truly willing to loosen their banking secrecy laws and provide information about tax evaders.

The British Have a Laugh

The controversy, which the Swiss believed had been resolved, continues to simmer. The new double taxation treaty, which has yet to be worked out, will play an important role. It will presumably be put up for a referendum vote in Switzerland.

The British are probably the most pleased with this situation, because they, not the Germans, used skillful diplomacy to increase the pressure on Austria and Switzerland until they were eventually forced to relent, after London asked the OECD to draft a blacklist. That was enough to frighten the listed countries.

At the same time, the British tax oases, such as Bermuda, the Isle of Man, the British Virgin Islands or Jersey, have made fewer concessions than Switzerland or Austria -- and they have always been amongst the most popular destinations for tax evaders. Great Britain will even retain its anonymous trusts, which conceal the holders' identities, just as Swiss numbered accounts used to.

Despite being at the forefront of fighting tax havens, the British make as few concessions as possible. Meanwhile, Germany and Switzerland are waging a diplomatic mini-war. Competing interests are at issue, perhaps even an "economic war," as the head of the Swiss financial markets authority recently said. The relationship between Switzerland and Germany is not likely to relax anytime soon.

At least the job of the German ambassador in Bern won't be boring, at least not for a while.