Britain's immigration authority on Thursday refused to allow populist Dutch politician Geert Wilders from entering into the United Kingdom. Earlier this week, the Home Office sent a letter to Wilders, who made the Islamophobic film "Fitna," saying it would not allow him to enter the country. 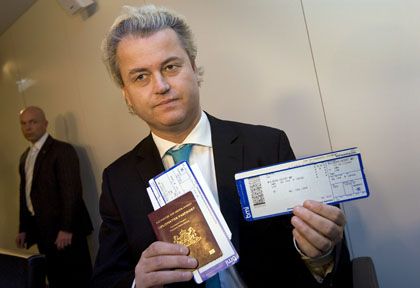 The incident sparked outrage in the Netherlands because a democratically elected member of parliament had been prevented from traveling to another European Union member state. After being briefly questioned, Wilders was placed on a plane back to Holland.

"He was refused entry  anybody who is refused entry to the UK will be detained and returned," a Home Office spokesperson told the French news agency AFP. "The government opposes extremism in all its forms. It will stop those who want to spread extremism, hatred and violent messages in our communities from coming to our country."

The Dutch politician had vowed to defy the Home Office's order to bar him from the country so that he could present his film "Fitna" in the House of the Lords, where he had been invited to show it. In its letter earlier this week, the Home Office claimed Wilders' visit would pose a "genuine, present and sufficiently serious threat to one of the fundamental interests of society.  Your statements about Muslims and their beliefs, as expressed in your film 'Fitna' and elsewhere, would threaten community harmony and therefore public security." The ban is a blanket one that Britain claims has been applied using EU laws that allow member states to exclude entry to anyone whose presence could threaten public security.

In an interview this week with BBC's "Hardtalk" program, British Foreign Secretary David Miliband defended the Home Office's decision to bar Wilders from entering his country, describing "Fitna" as a film that contained "extreme anti-Muslim hate." He said that while Britain has a "profound commitment" to freedom of speech, "there is no freedom to cry 'fire' in a crowded theater and there is no freedom to stir up hate, religious and racial hatred, according to the laws of the land."

According to a report on the SPIEGEL ONLINE partner site NRC Handelsblad, the Dutch ambassador in London, who went to Heathrow Airport to express his country's concerns, sought to secure Wilders' entry into Britain right up to the last minute. A spokesperson for the Dutch Foreign Ministry told the news agency ANP: "The Netherlands deeply regrets the fact that the United Kingdom was unwilling to retract its decision not to permit Mr. Wilders from entering the country."