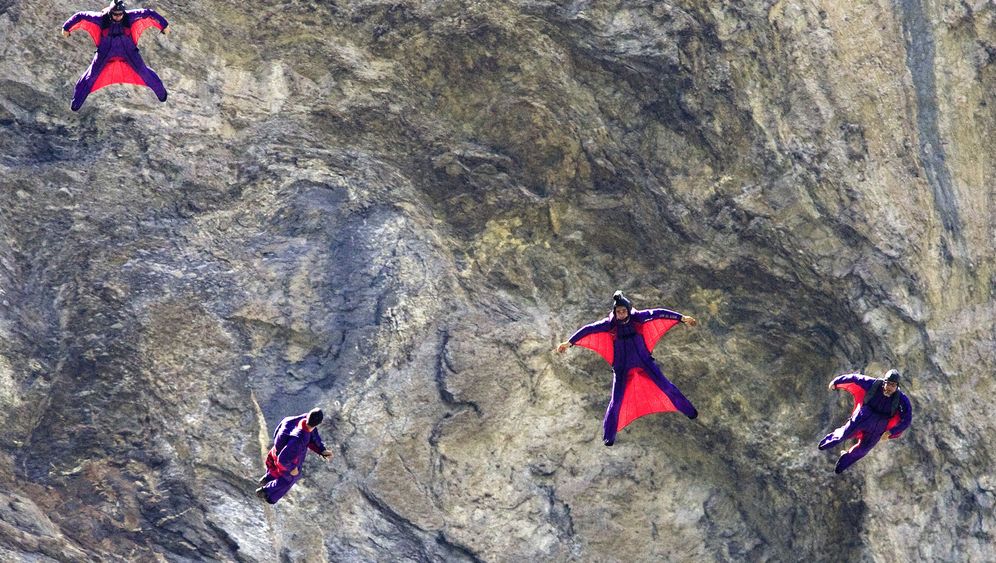 Photo Gallery: Dying For a Rush

Before Dominik Loyen, 43, leaps into the abyss, he dons his sunglasses. The German BASE jumper is standing on the edge of an 800 meter-high rock face in the Bernese Highlands of Switzerland. Beneath him lies the village of Lauterbrunnen. The sky is clear and mountain streams twinkle in the distance. Loyen takes two quick steps forward and flings himself over the edge.

He rushes downwards head first, barely missing a rocky outcrop. After 18 seconds in the air, Loyen deploys his parachute around 150 meters above the ground. Shortly afterwards, he lands gently in a valley field.

BASE jumping is a variation of parachuting, giving adrenaline junkies a buzz that lasts just seconds. But BASE jumpers don't dive out of planes. They jump from tall buildings, bridges and cliffs (BASE stands for Buildings, Antennas, Spans and Earth). And anyone who really wants to experience the feeling of flying comes here to Lauterbrunnen.

The village is a mecca for BASE jumpers. Enormous rock walls soar vertically at heights of up to 1,100 meters. Extreme sports fans come from around the world to enjoy the ultimate high, and there were around 15,000 jumps in Lauterbrunnen last year.

A Plague From the Sky

Many locals, however, are not happy about the visitors. Some 28 BASE jumpers have already died in Lauterbrunnen, including a French jumper who fell to his death in June after his parachute failed to open. For the local residents, the BASE jumpers are a plague from the sky.

Dominik Loyen is originally from the town of Viersen in the Lower Rhine region, but has lived in Lauterbrunnen for the past six years. In Germany, he needs a permit for every jump, and the jump points and landing areas must be approved. But in Switzerland, no approval is needed from the authorities. "Everyone is responsible for themselves," he says. "The cliffs belong to everyone." He loves the moment just before the jump. "Every hair is standing on end. The body resists what the head wants. If you manage to keep control in these extreme situations, it gives you a buzz, makes you feel superior, big," says Loyen.

Summer is the high season for BASE jumpers in Lauterbrunnen. In the tourist information office a poster offers them advice: "Respect your limits." Already, early in the morning, the jumpers are marching along to the valley station of the cable car, each equipped with a rucksack, helmet and parachute. A gondola takes them up to the mountain villages of Mürren and Winteregg. After a short walk, they arrive at the jumping spots, known as "exits." They have names like Nose, High Ultimate and Via Ferrata.

Many BASE jumpers wear "wingsuits," full bodysuits with fabric surfaces under the arms and between the legs. This special outfit gives the jumpers momentum in the air. With outstretched arms they swoop down in a nosedive towards the valley floor, resembling a giant bat. The flow of the air creates a noise, a fine swoosh that sounds like a distant jet aircraft.

Everyone in Lauterbrunnen knows this noise. The cliff from which the BASE jumpers leap is immediately adjacent to the village. In good weather, they can see a Batman flying by every minute or so.

'Slammed Against the Rocks'

Right next to the gondola station is the Stechelberg elementary school, from which there is also a good view of the cliff. At the beginning of July, the schoolchildren were celebrating the end of their school year with a theatre performance, followed later by a buffet on the football field. It was a beautiful day with a bright blue sky -- BASE jumping weather. Once again, the sounds of jumpers in the air could be heard -- and then a shrill scream.

"We looked on as a jumper slammed against the rocks a couple of times. At the end, the man was left lying lifelessly in trees on a slope," says Rahel Charrois. The teacher is still shocked by it today.

Charrois says she has never seen a year go by without an accident. In 2009, a class on a bike trip witnessed a BASE jumper fall to his death. The cost of the thrill is simply too much, insists the teacher. "We teach the children that it is important to be careful when crossing the street. How can we explain at the same time that people go BASE jumping?" she asks.

Anger in the village is growing. Farmers have been complaining about the BASE jumpers for some time because they land in their fields. They can't make hay out of the grass that has been trampled flat. "But the worst part is the deaths," says farmer Mathias Feuz.

Sitting on a stool in his barn, he describes how he once made a deal with two BASE jumpers allowing them to land in his fields along with their friends. He had been close to accepting the sport. But then the two suffered a fatal accident. In all Feuz has been forced to watch seven accidents from his yard, and he can no longer stand it. "I don't want any more people to die on my land," he says.

In Lauterbrunnen, these two worlds are colliding. The locals in this idyllic Alpine community feel like the residents of a death zone. Meanwhile the BASE jumpers are only interested in their next adrenaline rush. Next week, a BASE jump world cup is set to be contested in the Lauterbrunnen valley.

The jumpers have set up a small camp close to the gondola station, the BASE house. Inside the log cabin with a fireplace, Jonathan, a young American from California, is sitting on a plastic stool. He has bloodshot eyes and a scar on his forehead, having just been released from a hospital after he was caught on a tree during a jump in France. A branch pierced his abdomen and ripped into his bladder. The doctors told him that it would not have happened with an empty bladder. So from now on, he will always urinate before a jump, Jonathan says. He has never even thought about quitting.

The BASE jumpers in Lauterbrunnen take big risks. Anyone who jumps incorrectly, or doesn't judge the wind properly, will probably end up slamming into the cliff -- after which there is no escape. In the past 12 months, six BASE jumpers have fallen to their deaths. But the local authorities do not want to ban the sport -- the region is one of the few in Switzerland which does a better tourist trade in summer than in winter, thanks in part to the BASE jumpers.

Peter Wälchli, the mayor of Lauterbrunnen, sits at his tidy desk in the local government offices, a big man with a round face. "We have everything here for our visitors, apart from the sea. We would like to preserve this diversity and not ban individual sports," says Wälchli.

Then he talks about civil and aviation laws. He knows them well. The same discussion flares up after each fatal accident, and that is when Wälchli says: "The BASE jumpers are acting legally; they are not violating any laws."

Mathias Feuz, the farmer, gets into a rage when he hears his mayor talk like that. Just the other day, an Australian had an accident when his parachute became caught up in the gondola cables. It is just a matter of time before the next tragedy occurs.

"The authorities don't want to ban the jumping because even a dead BASE jumper brings money in," the farmer says angrily. Many in the area would earn some cash in such a case, "the doctor, mountain rescue" and also the hotel and restaurant industry -- "when the relatives travel here," says Feuz.