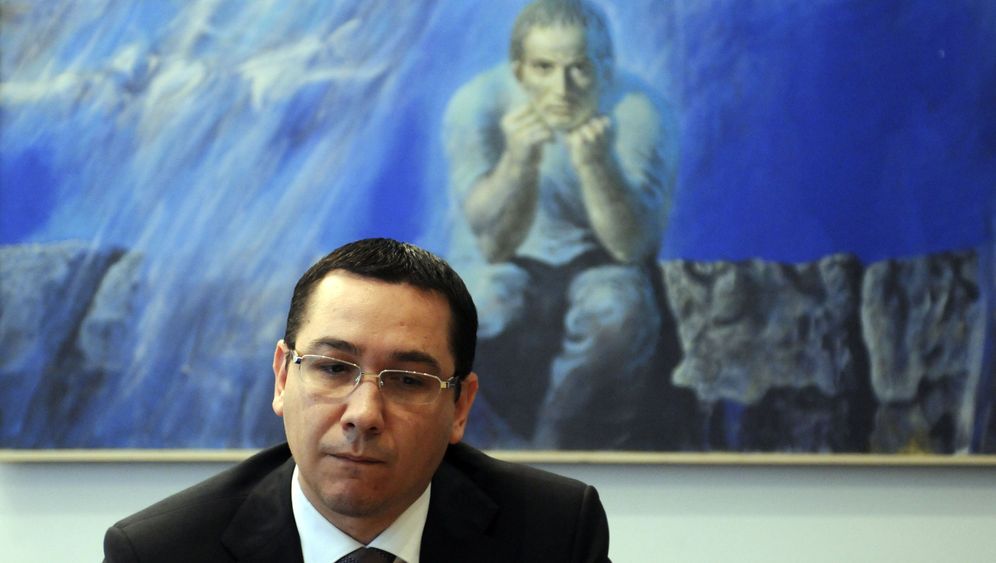 Photo Gallery: A Fight for Power in Romania

Romanian Prime Minister Victor Ponta exudes tranquillity. Even when faced with the most difficult of questions from hostile journalists, he doesn't lose his cool. The 39-year-old replies with restraint, using the tried and true language of democracy, frequently flashing his broad, innocent smile.

A former state prosecutor responsible for battling government corruption, since 2010 Ponta has been head of the Romanian Social Democratic Party (PSD), the country's most powerful web of post-communists. He plagiarized large sections of his Ph.D. thesis and bolstered his resume with fictional Master's degrees. As head of Romania's government, he is now demonstrating his expertise at dismantling the rule of law.

He has only been in office since the beginning of May, but since then, Ponta and his government have been engaged in a bitter power struggle with Romanian President Traian Basescu. Using decrees that often contradict parameters delineated by the country's Constitutional Court, Basescu was suspended from his office at the beginning of July. At the end of this month, a referendum will be held that could result in the president's impeachment.

Several Romanian observers, including the Bucharest-based lawyer Laura Stefan, have referred to Ponta's actions as "very clearly a coup d'état." Stefan is a member of an independent group of experts which, on behalf of the European Union, is investigating the degree to which the rule of law is being upheld in the country. On Wednesday, the European Commission is to present its biannual report on Romania's judiciary and its battle against corruption. Stefan expects that the Commission will repeat in writing the warnings it delivered verbally to the Ponta administration last week.

"No rules are obeyed here anymore," Stefan complains. "This isn't just a domestic policy problem for Romania anymore. If the EU allows this to go through, it would be a signal to all those who are opposed to the rule of law. It could affect the stability of the EU."

Even in post-communist Romania, Ponta's efforts to monopolize his power are unprecedented. The current showdown between the prime minister and the president began in early July with a bizarre argument about which of the two was authorized to represent Romania at the European Council meeting in Brussels. Romania's high court decided in favor of Basescu, but Ponta ignored the ruling and travelled to the summit anyway.

He has continued in a similar vein the rest of the month -- and the list is long:

Ruling by decree is hardly out of the ordinary in Romania, and it is a practice that the EU has criticized for years. Ponta and his team, while perhaps displaying more audacity than is customary, hardly represent a fundamental shift of Romanian political culture. It has also become standard in the country that, following a shift in power, huge numbers of civil servants lose their jobs in favor of those loyal to the incoming party. As such, many politicians in the country defend themselves from losing influence by simply changing their party periodically. That, in fact, is how Ponta was able to assemble his governing majority.

'Attacking the Rule of Law'

"What we are currently experiencing is the battle between two cliques," says Romanian essayist and historian Ovidiu Pecican. "Neither of them possess legitimacy, but they are prepared to fight to the end for influence and for their existence." Pecican, who also teaches at the University of Cluj, adds: "Ponta and co. are attacking the rule of law rapidly and with force. Basescu and his people used more moderate methods to hollow it out over time."

Ponta's three-party alliance, called the Social Liberal Union, is populated by a worrying number of prominent politicians and businesspeople who are suspected of corruption, abuse of office or crime. Interim President Antonescu's National Liberal Party, for example, provides a political home to the oil magnate and billionaire Dinu Patriciu, who has successfully withstood years of investigations into allegedly corrupt privatization deals. Head of the insignificant Conservative Party, Dan Voiculescu, is a former Securitate employee who was instrumental in helping ex-Romanian dictator Nicolae Ceausescu acquire hard currency. Now one of the richest people in the country, he owns the influential television broadcasters Antena1 and Antena3.

And then there is the Social Democratic Party (PSD) of Prime Minister Victor Ponta. The party has its origins in the days following the toppling of Ceausescu in December 1989. It rapidly became a collection of former Securitate and communist party elites and is seen by many in Romania as the ultimate symbol of a corrupt oligarchy.

Ponta's political mentor, former Prime Minister and PSD head Adrian Nastase, for example, is an icon of political corruption. On June 20, he was sentenced to two years behind bars for illegal campaign and party financing practices. It was the first time in two decades that a politician of his caliber was sent to jail. In an attempt to avoid jail time, Nastase last month acted out an elaborate suicide attempt -- which merely delayed his sentence by a few days. He is now in jail.

Nastase's sentencing, however, was the ultimate warning shot fired across the bow of Romania's corrupt elite. If someone at the level of Nastase can be thrown in jail, then it can happen to anybody. Indeed, observers believe that his sentencing is the primary motivation for the power struggle currently engaged in by Ponta and Basescu. "They are doing all they can to resist an independent judiciary," says the lawyer Laura Stefan. "They would rather that Romania was in a kind of gray area outside of the European Union."

Others are quick to warn against idealizing Basescu and his Democratic Liberal Party (PDL) in the face of the Ponta onslaught. "Basescu has played a significant role in causing the current political crisis," says the Bucharest-based political scientist Christian Parvulescu. He says that pro-Basescu sentiments coming from both Brussels and Berlin are "misplaced." Parvulescu says that "the president has an authoritarian style, makes racist and otherwise vulgar statements, has often intervened in government and parliamentary business and created a deep social divide with his austerity policies."

And there are also plenty of politicians belonging to Basescu's Democratic Liberal Party (PDL) who are suspected of corruption. Indeed, were Basescu to be voted out of office, corruption investigations into his past dealings could resume. An old real estate deal of his has come under suspicion and his role in the privatization of parts of Romania's shipping fleet has also yet to be fully exposed.

Given how much is at stake for the pair, perhaps the brutal nature of their power struggle isn't surprising. Even the otherwise calm Ponta has occasionally lost his temper in front of the television cameras. He has called the suspended president a "duplicitous scoundrel," a "scorpion that kills everything around him," the "biggest liar in Romanian history" and a "man without shame or honor." The prime minister also promised "to never again speak to this man who will ram a knife into your back as soon as you turn around."