Romania's suspended president, Traian Basescu, did his best on Sunday to sound like a statesman. "I assure Romanians that once I return … I will try and generate a sentiment of reconciliation in society," he said. "Divisions in society must be stopped, they must be annihilated, because Romania needs all its energy to … integrate into the civilized world."

He will have his work cut out for him. Basescu on Sunday appears to have narrowly survived an impeachment referendum due to low voter turnout in the culmination of a highly public power struggle between him and Prime Minister Victor Ponta. Whether that will be enough, however, for the two politicians to find a way to repair their hostile relationship and ease the political crisis which has paralyzed the country in recent months remains to be seen.

"Romania is divided into two political tribes," says Dimitar Bechev, who runs the Sofia office for the European Council on Foreign Relations. "It isn't a principled political disagreement, it is a dirty war. And it has become very personal."

According to the Central Election Bureau, just 45.9 percent of Romanian voters found their way to polling stations on Sunday, falling short of the 50 percent needed to make the referendum valid. While authorities declined to release the outcome of the vote, exit polls indicate that more than 80 percent of voters opted in favor of removing Basescu from office. Basescu, however, had asked his supporters to boycott the referendum.

The nationwide vote on whether Basescu should be allowed to remain in office became necessary after the Romanian parliament suspended the president from his office in early July. The Ponta government accuses Basescu of overstepping his authority to interfere in the daily running of the country and preferring loyalists when making important judiciary appointments.

Disregard for the Constitution

But Ponta's energetic efforts to discredit the president have landed him in hot water with the European Union. Indeed, the prime minister was called to Brussels early this month for a dressing down from European Commission President José Manuel Barroso. Specifically, the EU is concerned with what critics have described as Ponta's disregard for his country's constitution.

For one, Ponta ignored a high court decision regarding who was constitutionally authorized to represent Romania at European Union summits. After the court ruled that the president alone was authorized, Ponta travelled to Brussels for a summit anyway. In addition, Ponta has indicated that he intended to defang the Constitutional Court and replace some of the justices.

"Events in Romania have shaken our trust," Barroso said two weeks ago, underlining his concern. "Party political strife cannot justify overriding core democratic principles." The EU's progress report on Romania was likewise scathing, saying that "exceptional events" in the country were a "major source of concern."

Ponta had likewise attempted to change the rules governing national referenda of the kind that took place on Sunday. He issued a decree casting aside the requirement that half of registered voters take part in referenda before it became valid. Under EU pressure, however, he reversed course recently.

Still, Ponta seems intent on seeing the back of the president. In a recent interview with SPIEGEL, in which the prime minister was eager to present himself as a committed democrat, he was asked: "If only 45 percent turn out, but there is a clear majority against Basescu, do you think he should remain in office?" Ponta replied: "That would then be his decision if he remains in office or not. He would have to ask himself in such a situation who he represents, but certainly not the majority of the people."

Indeed, Sunday's vote is unlikely to be the end of the political crisis in the country. Analyst Bechev says that the battle between the prime minister and the president was intensified by the June sentencing of former Prime Minister Adrian Nastase to two years in prison for corruption. With courts showing a willingness to convict senior political figures, he says, it raises the stakes for those currently in power. "The verdict called into question the post-Communist consensus of not prosecuting past prime ministers," Bechev says. "Now, both Ponta and Basescu believe it is about personal survival."

Indeed, the two have continued their battle despite indications that it has worsened Romania's economic situation. To name just one example, the value of the country's currency, the leu, has plunged in recent months.

Despite his Sunday victory, it seems that Basescu continues to have the worst cards. While exit polls in part reflect the disinclination of Basescu supporters to cast their ballots, the president is far from popular. In pre-referendum opinion polls, fully 65 percent of respondents said they would like to see the president lose his job. In addition to his often brusque leadership style, Basescu, a former ship's captain, has presided over deep austerity measures 2010 as a condition for receiving €5 billion ($6.2 billion) in emergency aid from the International Monetary Fund.

The stalemate is likely to continue in the immediate future. For one, Ponta has talked himself into a corner that will be hard to escape. He has called the suspended president a "duplicitous scoundrel," a "scorpion that kills everything around him," the "biggest liar in Romanian history" and a "man without shame or honor." The prime minister also promised "to never again speak to this man who will ram a knife into your back as soon as you turn around."

For another, Romanians will be going to the polls again this autumn for general elections pitting Basescu's conservatives against Ponta's leftists. With the president's popularity not likely to dramatically rebound by then, the vote could hand Ponta even more power than he already possesses. Which might be bad news for Basescu

"In the medium term, he is likely gone," says Bechev. "A lot of people who trusted him once have abandoned him. Basescu won the battle, but he hasn't won the war." 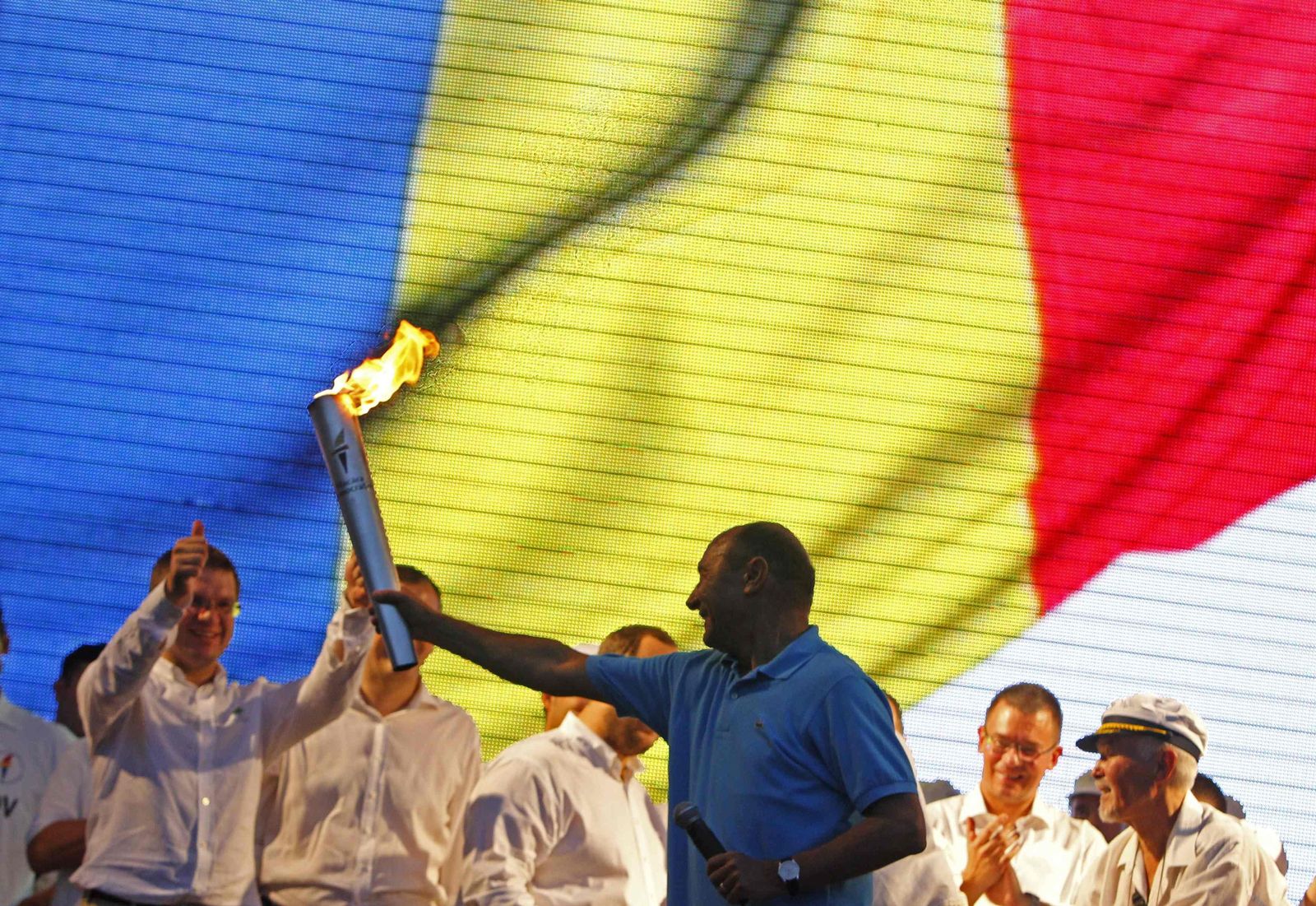 Romania's suspended president, Traian Basescu, with a torch during a rally in Bucharest last week ahead of Sunday's referendum.