Sir Ivan Rogers has proven himself an oracle more than once in the past few years. Great Britain's 59-year-old former ambassador to the European Union predicted that Brexit would be a terrible idea for his country long before the ill-fated referendum. He even foresaw Theresa May's tragic downfall. He also anticipated that it would be impossible to negotiate a divorce agreement with the EU in two years' time that could pass parliament.

Only no one wanted to listen to him.

On Monday of this week, the man some people have begun referring to as "Dr. Doom" sits in a German restaurant in London, stares at his coffee and says, "I wish I hadn't been right."

Then he offers another prophecy: "I suspect we might have Boris Johnson for 10 years, maybe longer." For the United Kingdom, he says, this will be disastrous in the middle term. "But who cares about the middle term?"

Ten more years of Johnson? After all the scandals and embarrassments the prime minister has caused in his mere three months in office? After all the resignations and ejections that have left the berserk, blonde-haired Boris presiding over a virtually unmanageable rump government?

It's a bold prognosis, but this time Rogers is not alone. There is a growing number of people in London who believe that every defeat Johnson has suffered since July, in the British parliament, in court or during negotiations in Brussels, has only made him stronger. Some argue it might even have been part of the prime minister's plan all along to let himself be gagged, encircled and bullied in order to prove his chops as a political escape artist.

Some of Johnson's people speak of a win-win situation now that the Brexit marathon appears to be entering the home stretch. No matter what the next few weeks bring, they say, Boris Johnson will be the winner. That's why he's trying so hard to force new elections.

But would he really win an election?

After a week like the one we just had, it is hard to believe. Sure, Johnson returned -- against all expectations -- from Brussels this week with what he called a "great new deal." But when he got back to London, he discovered that while he had satisfied the pro-Brexit extremists in his Conservative Party, he had alienated a majority of the people in every other political camp.

And so, the week ended with Johnson having to give up on the notion of Oct. 31 being Brexit Day, and having to wait and see how long the EU would postpone the much-awaited withdrawal date this time. It wasn't long ago that the Conservative prime minister said he'd "rather be dead in a ditch" than do exactly this.

Amid all the chaos, the prime minister did have one reason to celebrate: A majority had been achieved in parliament for the first time for a Brexit law, with 329 voting for and 299 against. The euphoric headlines that followed, however, proved premature.

As it turned out, many of those who voted "aye" only did so in order to be able to riddle Johnson's law with supplementary motions in further proceedings.

This may seem counterproductive, but there is a method to the madness. It all comes down to one question: Can Johnson be trusted? Many of his party colleagues have no trouble answering, "Never." In the past few weeks alone, there has been ample evidence of this. For instance, Johnson asserted that he had no intention of sending parliament on a forced break -- only to do exactly this, and unlawfully no less. The 55-year-old promised his de facto coalition partner, the unionist splinter party DUP, that he would not allow a customs border between Britain and Northern Ireland. But that's exactly how he bought his new agreement with the EU.

The closer Oct. 31 gets, the greater the panic is in the House of Commons. Many parliamentarians wonder what they should make of Johnson's assertion that he does not intend to leave the EU on Halloween without an agreement.

This is the one thing most MPs can agree on: They would prefer to avoid a so-called no-deal Brexit. Nearly all of the procedural tricks and legislative finesse with which parliament outmaneuvered the Johnson government in recent weeks were in pursuit of this goal. It was a matter of depriving the prime minister of any legal opportunity to take the country out of the EU without an agreement now or in the future. It took yet another breathless marathon of meetings, but that goal has been achieved for now.

Consequently, Johnson's options have shrunk to a minimum. The man who once proclaimed a glorious future for the UK with colorful hyperbole now seems thin-skinned and discontented. He has lost the first battle over the deal he brought back from Brussels. The real battle, however, is yet to come.

New elections seem more and more like a foregone conclusion, and Johnson is well-positioned, not only because, according to Ivan Rogers, "it's much easier for him to campaign than govern."

On Thursday evening, Johnson announced that he would once again try and muscle his divorce agreement with Brussels through Britain's lower house. If he's successful, he could present himself on the campaign trail ahead of new elections as the man who led his country to long-awaited freedom.

The fact that this freedom could cost the British economy many billions of pounds seems to be of no consequence for the many UK citizens who are drunk on the prospect of leaving the EU. Johnson would be the man who, as the old referendum slogan went, helped his country "take back control."

It would be the sweetest victory for Johnson, who in his biography of Winston Churchill raved about how a single man determined the fate of an entire nation. And this is exactly what his opponents in parliament are trying to prevent.

That's why the prime minister has been preparing for weeks for the contingency that he may have to hit the campaign trail without an agreement. If he had his way, an election would happen before Christmas, maybe even as early as Dec. 12. Whatever the date, that's when Johnson intends to finally change the composition of the House of Commons to his advantage.

What Doesn't Hurt Him Makes Him Stronger

Johnson had already announced on Tuesday in the House of Commons that the dispute would ultimately have to be decided by British voters. In his words, they are "our masters, the people."

Until recently, the strategists at 10 Downing Street had regarded this outcome as political suicide. They feared hitting the campaign trail in the middle of an unresolved Brexit dispute, with a man who had not kept his central promise, would only lead to disaster.

But their efforts to make Johnson seem like the one, true man of the people appear to be paying off. Polls indicate that Johnson's Tories have a 15-percent lead over the Labour Party. The unprecedented series of defeats in parliament, the condemnation by the Supreme Court, the lies and half-truths of the Brexit negotiations, the unresolved allegation that Johnson protected an alleged former lover with taxpayer money -- none of it has harmed the prime minister. On the contrary.

Downing Street is apparently right to believe that no normal person can be bothered to understand everything that has gone on behind the scenes in the three-and-a-half-year-long battle of attrition in parliament. Tuesday of this week provided a good example: The House of Commons refused to rush Johnson's Brexit law through. The government had allocated only three days for its consideration -- less time than was once granted to decide on a law regulating wild animals in traveling circuses. The MPs were unwilling to play along.

Johnson is apparently hoping that the average voter will think that a body of EU-loving representatives had yet again obstructed the path to independence for the British people.

Months ago, he accused members of parliament of being "collaborators" with Brussels. He called a law with which the House of Commons wanted to prevent a No-Deal Brexit a "surrender law." Since then, MPs have received death threats and other intimidating remarks from people who directly quote Johnson's words. He didn't even try and restrain his most bellicose acolytes when they denounced Britain's Supreme Court judges as willing accomplices of the EU.

People like Michael Heseltine, an old fixture of the Conservative Party who fell out of its graces, believe that from Johnson's "day one in office, a Brexit general election was the strategy." Now, Heseltine says, the prime minister's strategy is to manipulate people with a fear of criminals and anger at his political opponents.

"Parliament, the elite, them against you, the people." That will be Johnson's campaign message, Heseltine believes. And large sections of the British press will, as always, stand by as uncritical cheerleaders.

Johnson's only problem is that he's not going to get his new elections without a fight. So long as he doesn't want to resign or risk a tricky legislative manoeuver, he'll need a two-thirds majority in parliament -- and thus the approval of Labour MPs and their leader, Jeremy Corbyn. Johnson already failed twice in his attempt to force new parliamentary elections; both times, Labour denied him his wish.

Corbyn's party is divided. Many Labour MPs are afraid that their own unclear stance on Brexit, and Johnson's machinations, could result in a devastating defeat for their party. Labour lawmakers all the way up to the party's leadership are arguing they should simply let Johnson and his rump government go on with business as usual until a second Brexit referendum becomes inevitable. Around a million people recently took to the streets in London to demand such a vote.

For Corbyn, the situation is precarious. How long can an opposition leader justify not wanting new elections in the face of an annoyed and fed-up public?

Should Labour ultimately agree to new elections, the crucial question for Boris Johnson will be: How can he keep Nigel Farage, the high priest of EU-haters, in check? The head of the Brexit Party already said last week that Johnson's deal was "not Brexit." In the Daily Telegraph, long supportive of Johnson, Farage laid out his reasoning in a two-page advertisement spread. The recent postponement of Britain's departure from the EU will boost Farage's political following, which had seemed to be weakening lately.

Farage, who has significantly contributed to the division of British society, will do everything in his power to make Johnson look like a cheap knockoff of himself -- like someone who talks the Brexit talk, but who has walked away from pure "Leave" doctrine.

If the Brexit Party achieves a double-digit result in the next election, Johnson's dream of an absolute majority would be shattered -- and with it, his hope of pushing his preferred version of Brexit through British parliament. Even for the prime minister, new elections would come with inherent risks.

The course is set for an election campaign like the once-so-unideological Britons have never seen. The Tories are already little more than a "Brexit Party rebranded," says Ken Clarke, a Johnson critic and another excommunicated, old-school Conservative. And hardly anyone will be able to prevent Johnson from moving the party further to the right.

The prime minister has linked his fate to Brexit, and he has already gone too far to stop. He doesn't seem to care who or what he destroys along the way.

Meanwhile, Ivan Rogers, the ex-diplomat, sincerely hopes that he's wrong, at least this time. "We are in deep shit," he says rather undiplomatically. "It's only going to get worse from here." 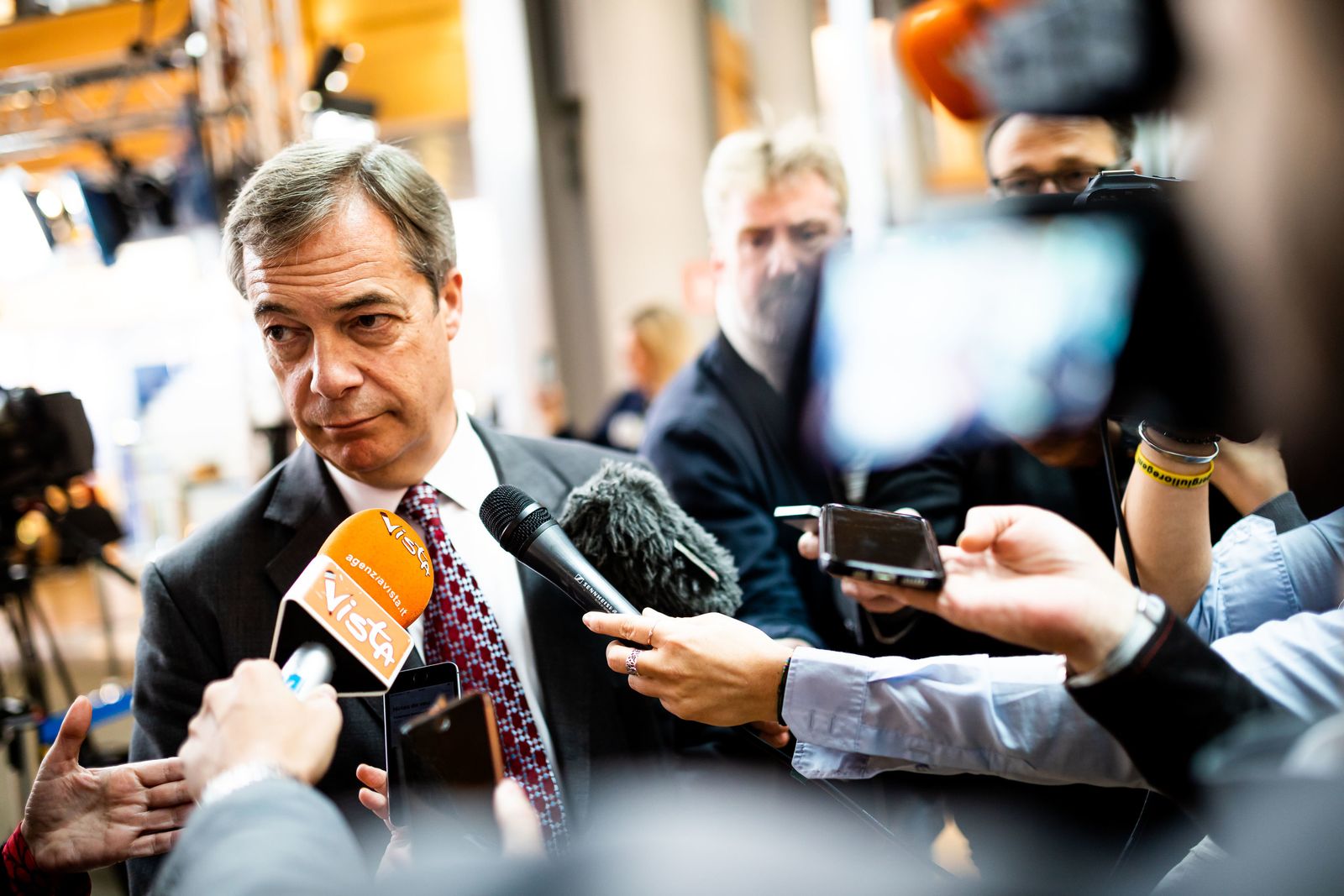