German Chancellor Angela Merkel was unexpectedly frank in a chat last week with her predecessor, ex-Chancellor Gerhard Schröder. Sipping a glass of white wine at an event on Tuesday, Merkel told Schröder that Germany might soon have trouble with the new French president, Nicolas Sarkozy. Schröder, a glass of red wine in his hand, nodded and listened, having navigated troubles of his own with France. Merkel said Sarkozy had played a constructive role at the European Union summit in Brussels last month because his interests coincided with Berlin's. But it was only a matter of time, she said, before the Germans and French would be at odds again.

A date for the showdown may already be set. Merkel will meet Sarkozy in Toulouse on July 16. Scheduled as a routine meeting, the mini-summit could flare into something else. Schröder and former French President Jacques Chirac (Sarkozy's predecessor) exploited every chance to show that the two countries enjoyed a harmonious friendship. But the meeting in Toulouse will be anything but a chummy get-together. Sarkozy will try to cement French dominance in the European Aeronautic Defence and Space Company (EADS), the massive public-private parent company of aircraft manufacturer Airbus. The Sarkozy team's plans include nothing less than an assumption of power in the complex French-German company -- which, so far, has been organized to give equal say to Paris and Berlin.

But Merkel won't submit without a fight. The bitter tug-of-war over positions and financing shares currently transpiring behind the scenes resembles a strange mixture of arm wrestling and chess.

Two Problems: Who Pays and Who Leads

The French have increased their pressure on the Germans on two fronts in recent weeks. First, they proposed a capital increase in the billions of euros. Then they demanded the elimination of German-French co-CEO positions and suggested a more hierarchical structure at the top of EADS: a CEO and a chairman. 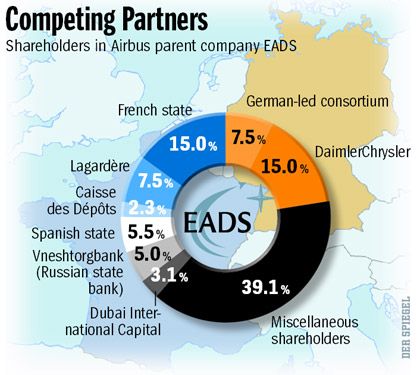 The goal of the two French moves is to put Berlin on the defensive. A capital increase might ratchet up pressure on the Germans, given that they barely managed to find a buyer, only five months ago, for a 7.5-percent share package which DaimlerChrysler (a major EADS shareholder) wanted to unload. Jens Weidmann, the chancellor's economic advisor, spent months trying to put together a solution that would ensure that the Germans and the French would continue to hold equal stakes in EADS. The German government was neither able nor willing to intervene. The French know a capital increase would force the Germans to drum up billions in capital to preserve a finely balanced financial parity.

France's other proposal, on leadership structure, would upset the political balance. Paris openly wants to eject Thomas Enders, the unpopular German co-CEO of EADS. Last week the French attempted to weaken his position with carefully placed leaks. French newspapers even cited government sources to report that Enders' ouster was a fait accompli.

But Berlin is planning a counteroffensive. Merkel says her team would discuss a reform of the leadership structure -- on the condition that the senior positions remain equally distributed between the Germans and French.

The Germans have downplayed the need for a capital increase on the grounds that EADS' financial woes are far less pressing than they were only a few months ago. Aircraft production is booming. Airbus has sold more than 400 aircraft in the past few weeks alone, significantly reducing the lead held by longtime competitor Boeing.

In addition to generating much-needed revenue, the improved business outlook has also improved its credit standing with banks -- so that raising cash no longer poses a problem, at least in the short term. "A capital increase should not be an issue for the next two to three years," says a senior government official. This change in outlook has Berlin taking a more relaxed approach to the possibility that the French will insist on a capital increase in an effort to embarrass the Germans. If push comes to shove, major shareholder Daimler would contribute its share of a financial boost to the company. 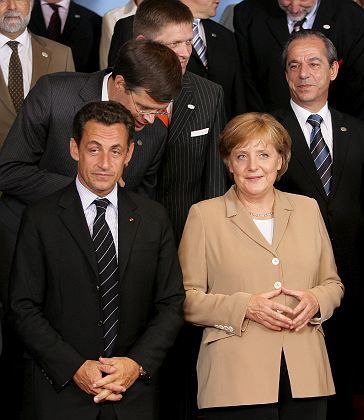 Until recently Daimler had signaled a wish to withdraw from EADS over the long term. This is the reason it sold its 7.5-percent share package and planned to unload its remaining 15 percent of the company's shares. But in negotiations that were as tough as they were confidential, Merkel managed to convince DaimlerChrysler CEO Dieter Zetzsche to maintain his investment in EADS.

The willingness of the largest German shareholder to inject additional capital if needed will likely prompt the French to abandon their plans. A capital increase that fails to achieve the desired goal of changing the balance of ownership would no longer be attractive to the French. Since Paris invests directly in EADS, it would be up to the French state -- whose national budget is in substantially worse shape than Germany's -- to raise the necessary capital.

Berlin also plans to stand firm on the matter of executive staffing. The Germans are in favor of more streamlined senior management, but they have no intention of sacrificing Tom Enders. If Merkel had her way, in fact, Enders would be the company's sole CEO, while the current co-CEO, Louis Gallois -- or another Frenchman -- would assume the position of chairman of the executive committee.

The Germans in return would continue to allow a Frenchman to run EADS's main subsidiary, Airbus. The post is considered the most influential in the entire company. It is currently held by Gallois, who also holds the post of co-CEO of the parent company. 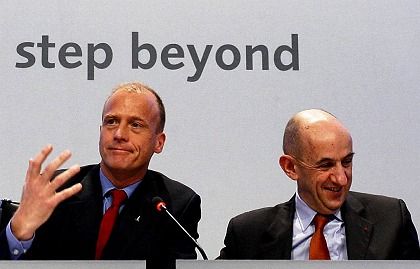 Giving up any claim to the Airbus CEO position is no great sacrifice for the Germans, who currently lack a suitable candidate. Besides, no one in Berlin expects the French to offer Germany the position voluntarily. This explains why Berlin would be so adamant about having a German in the position of CEO at parent company EADS.

The Germans know the French have mixed feelings about Enders. He's an amateur skydiver who has worked for the company for the past 16 years; but the French view him as an obstructionist and an annoyance. He's had repeated run-ins with the French establishment, raising the ire of the French political and economic elite.

For example: Enders' former French co-CEO, Noël Forgeard, left his job in July 2006 with a generous €8.5 million severance package. Enders annoyed Paris in spring 2007 by revealing the dubious circumstances of his colleague's golden handshake -- during the French presidential campaign. Then-candidate Sarkozy in particular was outraged, because he'd consistently denounced golden-handshake deals on the campaign trail.

Enders also ruffled French feathers when he praised the notion of French EADS shareholder Lagardere selling its aircraft subsidiary Dassault as a "good idea." The company builds the Rafale fighter aircraft, a competitor to EADS's Eurofighter model. The French were livid.

Nevertheless, the administration in Berlin thinks the French president will prove flexible when it comes to the personnel issue. "Sarkozy knows full well that he'll need us when the time comes," says one administration official, who believes Paris has already signaled its willingness to compromise. But then nothing is set in stone. The French, says a Daimler executive, are always good for last-minute surprises.