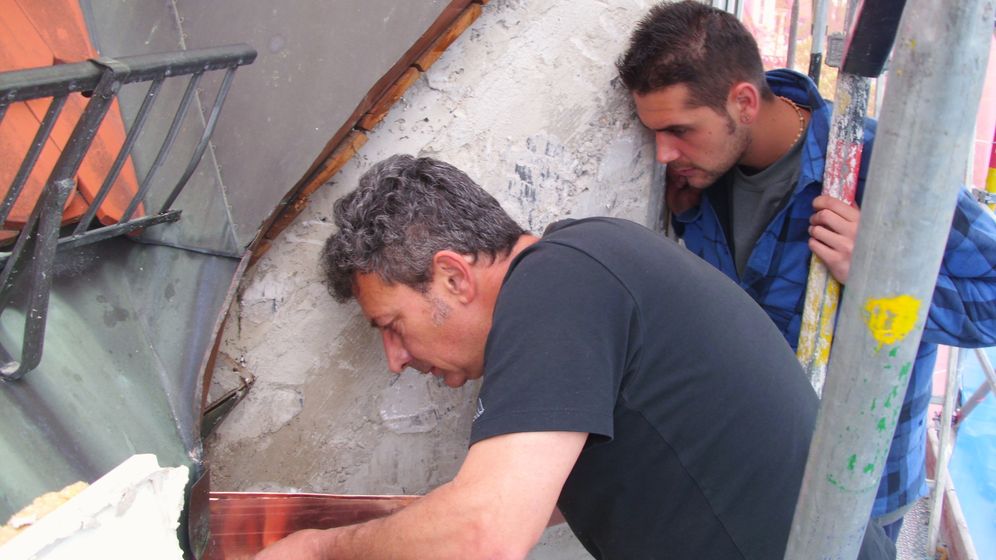 It's a cool, cloudy morning in Munich as Antonio nimbly climbs up the narrow ladders of the scaffolding outside Wilhelmstrasse 17. The six-story building is under renovation -- one of several in the neighborhood -- and the metal work that lines each floor has to be replaced and molded to the building.

When Antonio reaches the top, his boss greets him and promptly demonstrates how to use a hammer and pliers to fasten a small sheet of copper to the gutter. His explanation of the task is a crude exchange of hand motions and incomplete sentences -- Antonio understands almost no German. But he picks up the work quickly. It's his fourth day on the job.

Antonio José García Roca, 27, is one of 11 Spanish immigrants participating in a pilot program organized by the Chamber of Crafts for Munich and Upper Bavaria. The program aims to address the shortage of medium-skilled specialized workers among small- and medium-sized German companies, considered to be the engine that keeps the German economy humming. Spaniards between the ages of 18 and 30 possessed of job training and work experience are paired with employers in and around Munich that have job openings. Now in its ninth month, the program hopes to place at least 21 Spanish workers in Germany by the end of its pilot phase at the end of the year.

"Given the high youth unemployment in Spain at the moment, there was this idea that there are a lot of people in Spain who could do the work, (and) we have a lot of companies that need to fill their vacancies," said Elisabeth Kirchbichler, one of the coordinators of the program. "So let's bring them together."

Spain's unemployment rate is at an all-time high of 27.2 percent. It is even worse among youth under the age of 25, at 57 percent. Kirchbichler says she and her colleague were shocked on a recent trip to Cordoba when officials from the local chamber of commerce handed over a USB drive containing well over 1,000 applications -- a fact that highlights the massive amount of interest among Spanish youth in coming to Germany.

The flow of immigrants is already well underway. Figures released last week indicate that the number of people coming to Germany from Southern Europe sharply increased in 2012, with 9,000 more immigrants arriving from Spain than in the previous year, a jump of 45 percent.

García Roca has the tall and strong build of a manual laborer, wears a pointed stud in his left ear and has a thick accent that gives him away as being from southern Spain. His home state of Andalucia has the second highest unemployment rate in the country.

"I have 20 friends who are unemployed," García Roca says, sitting down for an interview at a café around the corner from the construction site. "Most of them worked in construction and manual labor, and there's no work there."

Upon completing the minimum education level in Spain at age 16, he received vocational training in welding. After working four years in the shipbuilding business, the sector collapsed along with the rest of the construction industry amid the economic crisis and García Roca lost his job in 2009. "The banks stopped lending them money to build ships, so they kicked 80 percent of the people onto the street," he says. "And I was one of them."

Searching for a Future in Germany

Odd jobs and seasonal work in the tourism sector provided little relief. García Roca says he grew tired of relying on his parents and wanted to become more independent -- to buy a house and start a family some day. "I had a dream, and if I stayed in Spain I wasn't going to achieve it," he says. He knew Germany's economy was doing better, so he saved up money from a summer job and bought a one-way ticket to Munich, landing in November 2012. It was the first time he had ever left Spain.

García Roca says he lucked out in that he found work relatively quickly, handling packages for the postal service. But staying at a hostel quickly ate up all his savings, and a merciful but meager payday advance from his part-time job lasted all of two weeks.

The details of the time that followed are murky. García Roca bites his lower lip and inhales, repeating several times that things were "complicated." He slept on the couches of various people he met, relying on the kindness of semi-strangers, before he found his way to a Catholic relief organization. A counselor there pointed him to the Chamber of Crafts, which eventually found him the job he now has at Moreno Nigro Tinsmith and Roofing Co. Nigro and his wife offered García Roca a room in their home, where he is staying until he can move into his own place in June.

García Roca is atypical of the program's participants in that he came to Germany independently. The standard procedure is for the Chamber of Crafts to match German companies with youth who have submitted applications in Spain. They then organize a Skype interview between applicant and employer, and if both sides are interested, the chamber pays for a round-trip plane ticket and accommodation for the applicant to come and work for a short trial period.

Should the German employer decide to hire the Spanish applicant full-time, the chamber pays for another ticket to Germany and helps the new hire get settled, which includes subsidizing their rent for the first 5 months and paying for German language classes.

Integration Via the Private Sector

The Chamber of Crafts declined to reveal its budget for the program, but said that roughly half of the money comes from its own funds while the other half comes from the EU's European Social Fund and the Bavarian Labor Ministry.

Demetri Papademetriou, president of the Migration Policy Institute Europe, a Brussels-based think tank, says that when integration became a hot-button issue in the middle of the last decade, the government was the driving force. That is now changing. The program by the Munich Chamber of Crafts reflects a growing awareness among private companies and labor unions that they, too, have a stake in the integration of their immigrant employees.

"There is nothing more important than enlightened self-interest," he says. "A worker who speaks the language, who's better adjusted in terms of his or her life in the community, who understands what it means to be a member of that community, is a better worker."

This is not, of course, the first time Germany has imported foreign labor to fill a gap. The postwar "economic miracle" was made possible to a significant degree by Germany's guest worker program, which brought in laborers from Italy, Greece, Turkey and other Southern European countries.

At the heart of the program was the assumption that the guest workers would ultimately return home, making integration superfluous. But many guest workers opted to stay in Germany, and many employers saw no sense in sending them home after investing in their training. Nowadays politicians and social scientists point to this lack of foresight in the guest worker program when explaining the tensions between "native" Germans and those with immigrant backgrounds.

'Lessons Have Definitely Been Learned'

"I think some lessons have definitely been learned," Kirchbichler says. "People just didn't know that those problems would occur. I think now we have learned the importance of (things like) language classes."

As a European Union citizen, García Roca doesn't need a visa to work in Germany. Yet EU rules allowing freedom of movement across borders address only the most basic legal barriers to immigration within the bloc. Once here, García Roca and the other Spanish immigrants needed help navigating a host of bureaucratic hurdles, like registering with the city, finding accommodation and opening a bank account.

Moreno Nigro, the owner of the company that hired García Roca, says there's little interest among young Germans entering the workforce in learning the tinsmith and roofing crafts. Thus it would be better for his business, and for the many other small businesses that can't find qualified workers to fill open positions, if immigrants like García Roca were to stay in Germany long-term.

"We're very satisfied, he fits in with us," Nigro says. "In a small business you have to fit in. He's always positive -- he even sings on the job."

The Chamber of Crafts also believes that program participants wish to establish themselves in Germany. "I think a lot of them are aware that the economic crisis in Spain will not be something that will pass within a few months," says Kirchbichler. "I think they do see a future here."

García Roca is less certain. He says his main goal now is to continue to learn the tinsmith trade and the German language, and to save some money. When asked what it would take for him to commit to staying longer, he laughs. "Get a German girlfriend," he says.