It's a sunny October day, and a raft made of welded concrete and carpeted with lawn turf is drifting on a reservoir south of Warsaw.

It's there at the behest of Poland's conservative opposition Law and Justice (PiS) party and is supposed to resemble a "green island." Intended as a floating symbol of the lies told by the liberal government, it's a reference to Civic Platform's vision for the country as a "green island of growth." PiS argues this vision has failed to materialize.

But its gimmick with the island is awkward, as is its candidate for prime minister, Beata Szydlo, as she hops onto the raft from a jetty. PiS has decorated it with eight posters designed to illustrate the promises that Civic Platform (PO) made and broke. The party has been in power for eight years -- a long time by the standards of Eastern European democracies.

Behind the microphone, Szydlo seems stiff. She wears blue trousers, a blue quilted gilet and a neckerchief, and she wrings her hands nervously. Speaking in a monotone, she lists the PO's failures one by one, and ends with the words: "We will work, work, work -- and not make as many promises."

Conspicuously absent from her speech is the usual PiS propaganda about hatred, the trouble with Germany, the Russian threat and the various conspiracy theories that party leader and co-founder Jaroslaw Kaczynski is so fond of.

Szydlo's reserve seems to be paying off. Pre-election polls show PiS with 36 percent support, with Prime Minister Ewa Kopacz's ruling Civic Platform trailing behind by over 10 percent. When the country votes on Oct. 25, the Law and Justice party could reprise its victory of 2005.

For the first time since his twin brother Lech died in the Smolensk plane crash in 2010, Jaroslaw Kaczynski chose not to run for election and to endorse a woman as the party's leading candidate. For the conservative, Catholic PiS, this amounted to the dawning of a new era, one that first shimmered on the horizon in the spring of 2015, when the party leadership named the little-known member of the European Parliament Andrzej Duda as its presidential candidate. He was handpicked by Jaroslaw Kaczynski, who singlehandedly decides who gets on the ticket.

Unexpectedly, Duda, a 43-year-old lawyer from Krakow, went on to defeat the centrist incumbent in a stunning victory. Five months later, Beata Szydlo is hoping to repeat his success. An ethnography graduate and mother to two sons, the erstwhile PiS backbencher was only recently as unknown as Duda. But she has a reputation for being well-adjusted, hard-working and resilient. But also a little dull.

Her speech on the raft is dragging on. Szydlo's campaign has steered clear of world affairs. She has refrained from hailing the election as a historic milestone for the Polish nation. Szydlo has opted to portray herself as a woman of the people, one who works hard and looks out for families, the elderly, the poor, and young people's futures.

"We want solidarity in Poland," she says. "We want to serve Poland, we listen to people." She has pledged to introduce a monthly child allowance, free medication for people over the age of 75, tax breaks for small businesses and a reduction of the retirement age from 67 to 65.

"The Polish people want change," says Krakow-based sociologist Jaroslaw Flis. "But they don't want a revolution. That's why PiS has gone for a moderate tone."

Since it was founded in 2001, PiS has dominated Poland's political right. It only once triumphed over the rival Civic Platform. Between 2005 and 2007, Jaroslaw and Lech Kaczynski were respectively prime minister and president of Poland, constituting a power-sharing team never seen before, notable not only because the twin brothers were so hard to tell apart.

The Kaczynskis ushered in a difficult era for Poland, then a freshly minted EU member. At home, the brothers launched political witch hunts against old Communist networks, while on the foreign policy front they ramped up the rhetoric against Germany, which they accused of playing down its World War II guilt. Poland assumed the role of Europe's troublemaker.

When its coalition government with two unreliable smaller parties collapsed, PiS was defeated in snap elections. The Polish people were tired of constant domestic turmoil and polarization. Donald Tusk's liberal Civic Platform came to power in 2007, and in 2010, incumbent President Lech Kaczynski and his entourage were killed when a government jet crashed while attempting to land near Smolensk, Russia.

Shortly thereafter, Jaroslaw announced he would replace his brother and spearhead the PiS alone. He suffered a string of defeats. His strident tone and nationalist pathos seemed obsolete at a time when the country was enjoying an economic upswing and evolving into a respected European partner.

It was time for fresh, friendly faces. Politicians like Duda and Szydlo, with realistic demands and moderate voices. For the first time in years, the party looked as though it could break out of its core supporters' 20 percent ghetto and attract voters in the political center.

Civic Platform, whose top dog Donald Tusk went to Brussels last year to take over as president of the European Council, the powerful body that represents the EU member states, is struggling to rise to the challenge. In the past, it was enough to deride the PiS as a party of nationalist nutcases. But as the presidential election demonstrated, this no longer flies. When incumbent President Bronislaw Komorowski refused to participate in a televised debate with his opponent Andrzej Duda, seriously underestimating his popularity, the voters saw it as an expression of arrogance and held it against him.

Recent weeks have seen his party colleague, Prime Minister Ewa Kopacz, conduct an uninspired campaign that has resolutely refused to catch fire. Kopacz is seen as an unimaginative technocrat; her party as a bunch of power-mad, arrogant liberals.

The party was also damaged by what has been dubbed the "taping scandal." Eighteen months ago, the press came across recordings of conversations that took place among senior Civic Platform politicians over boiled octopus in exclusive Warsaw restaurants. Not only did they seem decadent, they also seemed a little coarse. "We'll get into a conflict with the Russians and the Germans, and we'll think that everything is super because we gave the Americans a blow job," was one comment made by Radoslaw Sikorski, Poland's foreign minister at the time.

It also emerged that a member of parliament with the Civic Platform had omitted to mention a wristwatch worth over €5,000 when he declared his assets, and that Education Minister Joanna Kluzik-Rostkowska, accountable for the dilapidated condition of many elementary schools, was sending her children to private schools.

We Can Do It

Expensive wristwatches and gourmet restaurants don't feature in the world of Beata Szydlo. She doesn't have to pretend to be down-to-earth -- she just is. She served seven years as mayor of her home-town of Brzeszcze, a city of 12,000 inhabitants in southern Poland -- the most senior political office she's held so far.

She hasn't been afraid to get her hands dirty during her campaign. In the small town of Pcim she knuckled down with locals renovating the school, which lost its roof in a storm. In Brzeszcze she mingled with miners protesting against the threatened closure of their pit. Her campaign slogan is "Damy rade" -- "We Can Do It."

But what would happen if she actually wins? Will the PiS revert to its old nationalistic ways? Will its revamp prove to have been nothing more than a campaign tactic?

The party's original, familiar face reappeared again at a campaign rally only last week, when Jaroslaw Kaczynski warned of the dangers posed by Muslim refugees. "Cholera on Greek islands, dysentry in Vienna, all sorts of parasites and bacteria that might be harmless to these people can be dangerous here."

But on the other hand, today's Poland is not the same country as the one once ruled by the Kaczynski twins. Despite the global financial crisis, its economy has grown steadily. Unemployment is low. The country doesn't need to go begging. Thanks to agricultural subsidies and billions worth of aid for infrastructure projects, the EU remains highly popular. The Polish people wouldn't forgive Kaczynski and his party were their country to be turned back into an outsider.

After quarter of an hour, Beata Szydlo finishes her speech at the reservoir. She edges her way along the jetty back to dry land. The floating green island -- a symbol of empty promises -- bobs off across the water behind her. Before long, it has drifted out of sight. 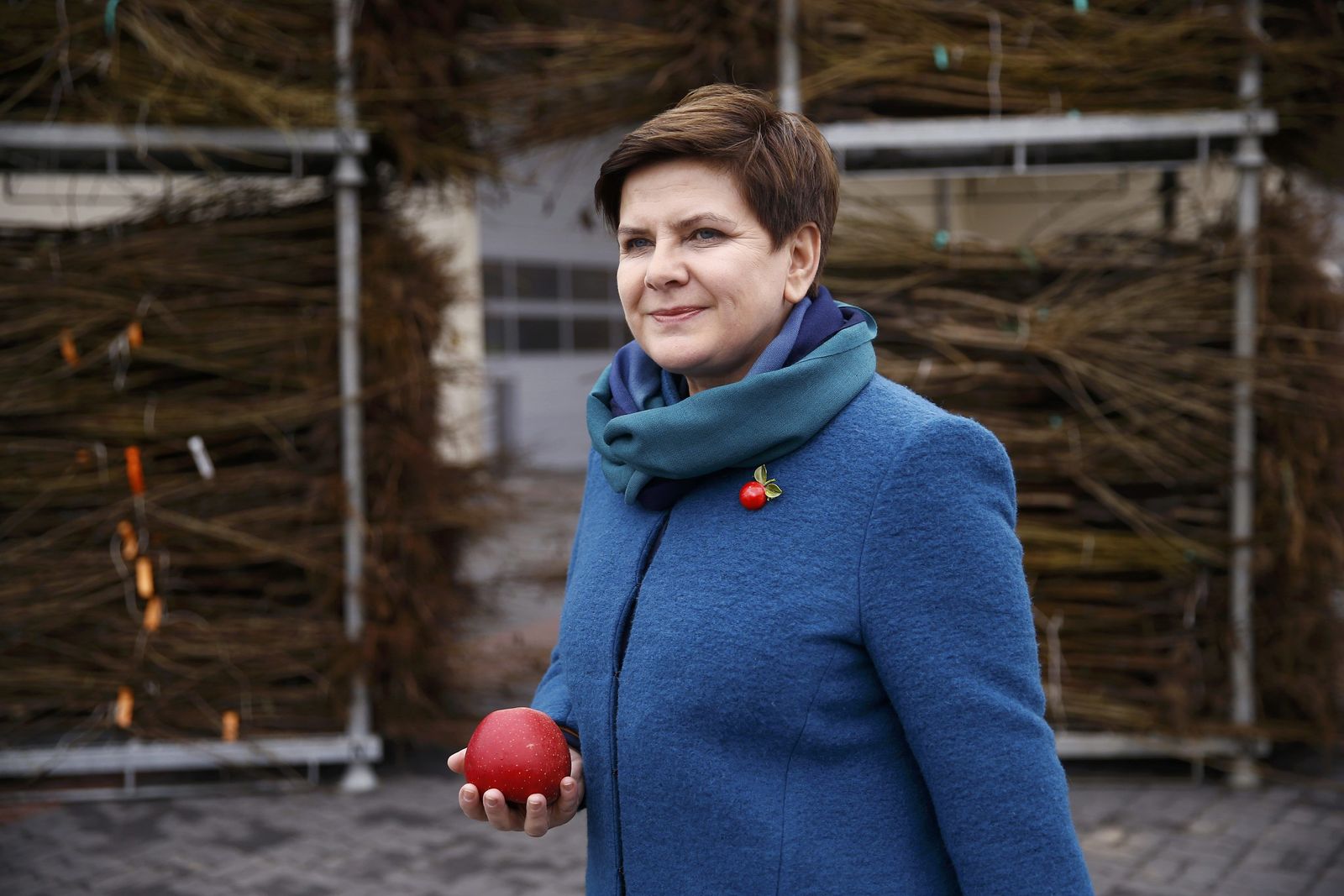 Beata Szydlo of the Law and Justice party looks set to oust incumbent Prime Minister Ewa Kopacz of the Civic Platform in Sunday's election in Poland.