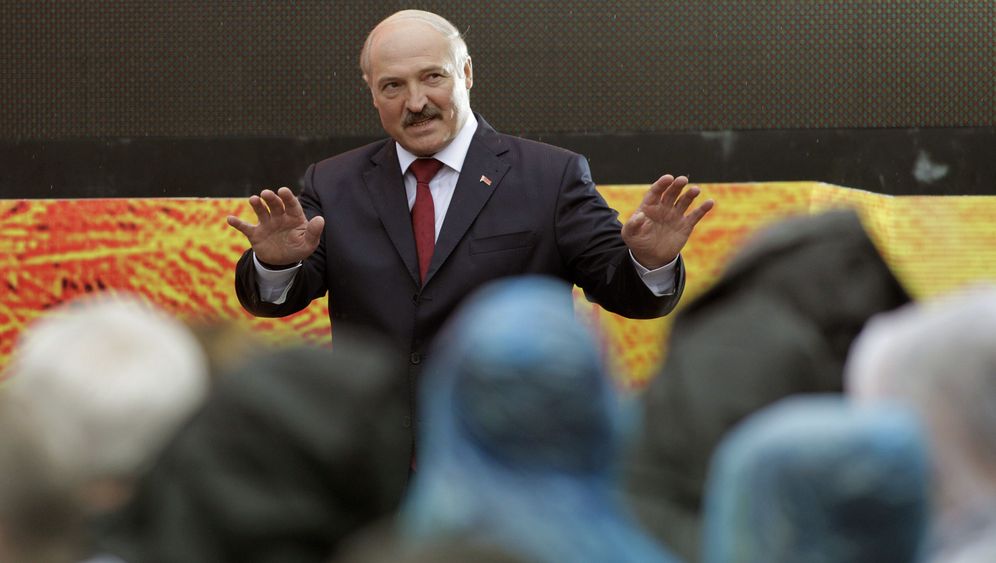 When Lidiya Yermoshina stepped in front of the press on Sunday, the head of President Alexander Lukashenko's loyal Central Elections Commission promised an election result "without surprises." As she spoke, the polling stations had only just closed and not a single ballot had been counted.

On paper, parliamentary elections in Belarus are a complicated affair. There are 110 electoral districts in which seven million eligible voters decide who gets direct parliamentary mandates. If no candidate gets the absolute majority in the first round of voting, a second round is held. And if the voter turnout is under 50 percent, the election is deemed invalid.

That's the theory. But in practice, all that counts in parliamentary elections in Belarus is the will of one man: President Alexander Lukashenko. His camp has so far controlled 102 of the 110 seats directly, while the other eight went to the Communist Party, which backs him.

On Monday morning the Elections Commission said the turnout was 74.3 percent. Not a single opposition politician won a seat. Only one of the 110 MPs couldn't be elected because he had failed to attain the absolute majority in his district. There will be a second round vote in his district. According to Yermoshina, it "isn't very likely" that an opposition member was among the elected MPs.

Lukashenko was brimming with confidence when he cast his ballot on Sunday, accompanied by his seven-year-old son Kolya. He said all 110 seats would remain in the government's hands and, referring to the opposition, remarked: "They are cowards who have nothing to say to the people." That came from the man who has had political rivals arrested and intimidated by the police and secret services. Several opposition leaders such as the politician Nikolai Stankevich have been in prison since the presidential election two years ago.

Oppositon members and journalists also faced repression during the election campaign. When reporters wanted to cover a demonstration by Lukashenko opponents in Minsk last week they were briefly detained by the police. They included a camera team from German public broadcaster ZDF and two photographers from the news agencies AFP and AP. A correspondent for Deutschlandradio wasn't even allowed into the country.

Several opposition parties called for the election to be boycotted so that the people could express their protest and force a new election. Other regime opponents such as the alliance "Tell the Truth" set up by the author and former presidential candidate Vladimir Neklyayev refrained from withdrawing their candidates because they would have lost their last remaining representatives in the local election commissions.

The opposition chose not to call its supporters out on to the streets after protests were brutally beaten down in the wake of the 2010 election. Instead, Lukashenko's opponents are now claiming that the turnout failed to reach the required 50 percent level.

According to election observers from the opposition Christian Democrats, the turnout was just 38 percent. Yermoshina, the head of Lukashenko's Elections Commission, had announced on Sunday afternoon that the necessary turnout would be reached.

Observers from Neklyayev's "Tell the Truth" collected evidence of election manipulation. They say that in election district Number 104, for example, the turnout was only 30 to 40 percent, while the Elections Commission said it was 52 to 55 percent.

Lukashenko can continue to bank on the kind of rubber-stamp parliament China or North Korea are known for. With this electoral farce the president -- who now and again makes attempts to improve ties with Europe and the West -- has once again revealed his despotic side.

But the election campaign also showed that there's no mood for change in the country, and that the opposition is divided. Efforts to forge a common strategy failed and in one case the mutual enmity among Lukashenko's opponents got physical.

Alexander Feduta, chief strategist of "Tell the Truth" gave the leader of the Christian Democrats a kick in the backside and derived considerable satisfaction from doing so, stating that he had "achieved what he had always dreamt of."

Lukashenko, 58, has been in power since 1994. Western observers say that since 1995, no election in the country has been free or fair. And Sunday's is unlikely to have been the last one to be manipulated in his favor.

According to opinion polls by the Belarus-based Independent Institute of Socio-Economic and Political Studies, public support for "Batka" ("Daddy"), as Lukashenko is known to his admirers, has grown again.

During the 2011 economic crisis, public confidence fell to a low of 24.5 percent. But the economy has stabilized again thanks in part to promised financial aid from Russia, China and Iran, and Lukashenko's personal popularity has improved correspondingly. In March 42.2 percent said they had faith in him -- in June the figure was 38.5 percent.

If a presidential election were held tomorrow, Lukashenko would get 30 percent, and his strongest opponent, Neklyayev, would get just 6.8 percent. Europe won't be rid of its "last dictator" anytime soon.