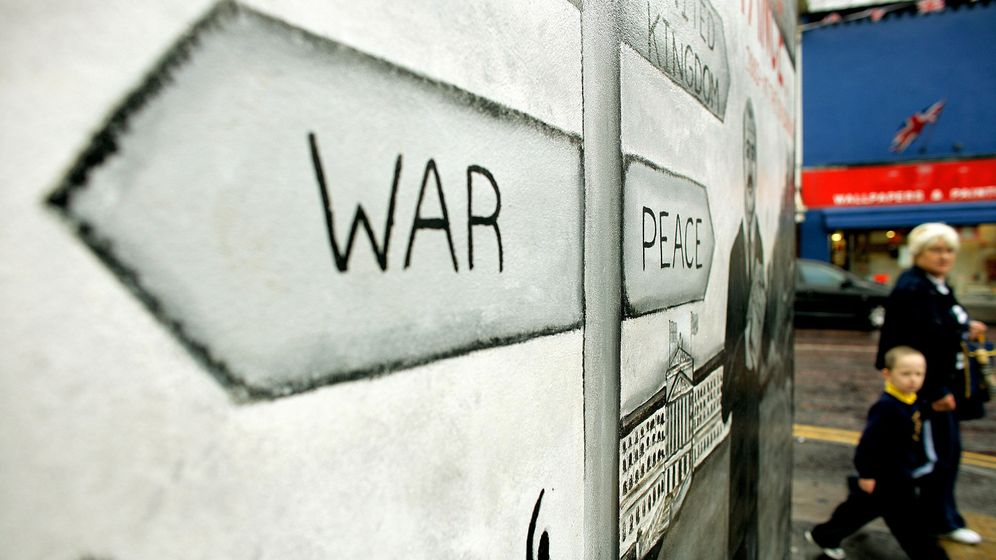 They are not to be missed on any trip to Belfast: the combined monstrous barriers of walls and fences, some up to eight meters (26 feet) tall, that separate the city's Catholic and Protestant residential districts. Travel guides show the tourists the best painted stretches of wall and recount the turbulent history of the so-called "peace lines." There has officially been peace in Northern Ireland since 1997, but Belfast visitors' interest in the civil war hasn't waned.

"Peace wall" is a euphemistic term for the structures which, for 40 years, have shaped the cityscape of the northern Irish capital. In 1969, British soldiers rolled out barbed wire between the Catholic Falls Road and Protestant Shankill Road. The first "peace wall" sprang up along the same route.

The wall is now eight meters tall. The lower five meters are made of concrete and the top three consist of a wire fence "so that people can't throw anything over the top," explains Neil Jarman of the Institute for Conflict Research in Belfast. Yet this has had the perverse effect of people trying to catapult things over it instead. As Jarman adds, the wall is crying out to have things thrown over it.

By the institute's reckoning, there are about 100 "peace lines" in the capital. They separate whole districts from one another, and pass through streets and gardens. Fifty-eight walls were put up by the British government, the rest by property managers and builders. Even though there has been a ceasefire between Catholics and Protestants in place since 1994, the walls are still being built at a furious pace.

As things stand now, the last official wall was built in 2008, on the playground of a primary school. The reason behind it: a petrol bomb attack on a Protestant neighborhood a few months earlier. Jarman can still only shake his head at the decision. This was a single attack. There are actually no problems in the area, but the first reflex is always to build a wall. Once the police have made such a recommendation, the government rarely opposes it.

The barriers are also popular with residents. When polled, the people of Belfast usually oppose tearing down existing walls. They feel protected and comfortable in their mighty shadow. "They're afraid they'll be vulnerable if things spin out of control," Jarman explains. This is especially true around July 12th every year when the Protestant Orange marching season begins. There was severe rioting in several parts of Belfast this year too. To natives of the city, that confirms their conviction that the walls still fulfill a purpose.

In Jarman's view, though, the walls have a terrible impact on the population's consciousness. "They reinforce segregation," the conflict researcher says. While there is awareness of the problem at the political level as well, there aren't negotiations on the matter because it isn't a vote-winner.

Jarman isn't willing to hazard a guess at when there will be a wall-free Belfast. "I was more optimistic two years ago," he says. "Now I don't know."