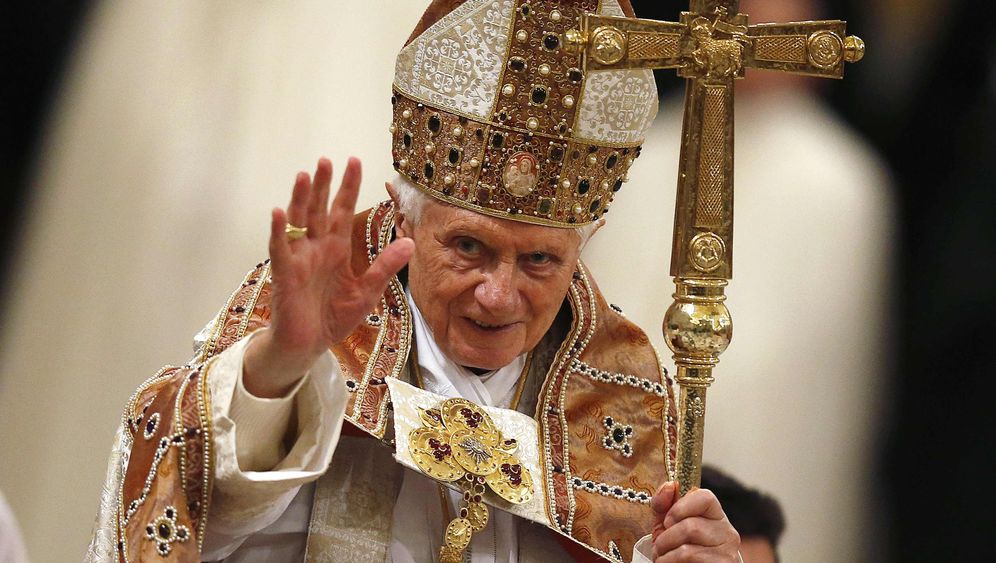 Photo Gallery: Benedict XVI's Path to Pope and Back

When the news came out at noon on Monday that Pope Benedict XVI would step down at precisely 8 p.m. on Feb. 28, it came as a surprise to more than just the Catholic faithful and priests around the world. "It was a bolt out of the blue," said Italian Cardinal Angelo Sodano, the dean of the College of Cardinals.

World leaders were also initially speechless over the development. "That would be striking news," Steffen Seibert, German Chancellor Angela Merkel's spokesman, said in response to a reporter's question earlier in the day, before asking for time to look into the question on his own. Later, on behalf of the government, he would express "respect for the decision" and for Benedict's "life's work." Even the pope's own broadcaster, Radio Vatican, was so taken by surprise that it mixed up the date and said the pope had stepped down on Friday. "We're no longer pope," a German public radio host said -- a play on the mass-circulation daily Bild, which proudly declared on its cover, "We're the pope," when news emerged in 2005 that then-Cardinal Joseph Ratzinger would be the new leader of the Catholic Church. Though somewhat flippant, the remark reflects the feelings of many in Germany.

Eighty-five year old Pope Benedict XVI found his own unique way of announcing his decision to step down. During the canonization of 800 martyrs and the founders of two congregations, he announced to his "dear brothers" in Latin, "the certainty that my strengths, due to an advanced age, are no longer suited to an adequate exercise of the Petrine ministry."

In today's world, he added, "subject to so many rapid changes and shaken by questions of deep relevance for the life of faith … strength of mind and body are necessary." But it was strength "which in the last few months has deteriorated in me to the extent that I have to recognize my incapacity to adequately fulfil the ministry entrusted to me." Benedict had already mentioned the possibility in the past that he might one day step down for health reasons.

But it seems likely that the move also came out of the realization that he no longer had complete control of the church. During the so-called "Vatileaks" affair last year, secret documents and letters were smuggled out of the Vatican over a period of months. They bore witness to intrigue and a shocking power struggle among top Catholic cardinals. Pope Benedict XVI has been unable to put a stop to it. Nor was he able to reform the Vatican Bank following a series of obscure deals apparently aimed at money laundering.

The pope has "suffered greatly under certain elements that come with the office," Max Seckler, a long-time friend of Ratzinger's, told the German news agency DPA. "It is difficult to imagine the degree of intrigue that is present in Rome." Seckler, 85, said that he has wondered for years how much longer his friend could stand the strain.

But Benedict, who holds a Ph.D. in theology, has also had difficulties addressing other issues facing the church. He has proven unable to adequately deal with the seemingly unending series of sex abuse scandals that has shaken Catholic institutions around Europe and the world in recent years. Furthermore, his hard-line stance on faith has done little to slow down the widening cleft between today's believers and the Vatican. Huge numbers have left the church in recent years, particularly in well-off dioceses in Europe and the United States as Rome has become increasingly inflexible in its orthodoxy under Ratzinger's leadership.

A Succesor By Easter

As such, powerful detractors of Pope Benedict XVI have long since begun preparing for the next papal election. It is, for the moment, difficult to see who might be the top candidates; there is no obvious successor. There are reactionary, conservative and liberal wings in the Catholic Church, along with the geographical alliances that define Vatican leadership. There are the Spanish-Latin American cardinals, for example as well as those from the US, who have become increasingly powerful in recent years. And, of course, there are the Italians, who could have the advantage after two straight popes from outside the Catholic Church's home after centuries of Italian pontiffs. Within these circles, furthermore, there are widely differing stances on where the church should stand on the several questions it currently faces.

Vatican spokesman Federico Lombardi hopes that a new pope can be chosen by Easter, at the very end of March. Prior to that, cardinals from around the world must make their way to Rome for the "conclave," which denotes the period during which church leaders will not be allowed to leave the Vatican until they have chosen a successor for Benedict XVI.

Lombardi seemed to hint at just how difficult that search might be in his noon comments, mentioning the "great problems the church faces today." Lombardi added that the pope did not expect that a schism would result from his decision to step down -- hardly the kind of statement that will resole doubts about the crisis now facing a deeply fractious church leadership.