Members of the French National Assembly and Senate listened attentively last week to a briefing from their president. As he does every Tuesday, Nicolas Sarkozy had invited leading representatives from within his governing party to breakfast at the Élysée Palace. There was nothing out of the ordinary about the weekly routine. Nor was it a surprise that at last week's breakfast, the French president addressed the euro crisis and the difficult negotiations over aid for Greece. But then, Sarkozy formulated his thoughts in a way that baffled his audience: "I spent the night with Germany."

But was he able to get any sleep?

Thinking about Germany has become a French obsession, because France is worried. It is wondering whether Germany will remain true to the European Union and the euro. Will Germany choose solidarity over discipline? Will Germany ultimately accept the measure that prevailing Parisian opinion considers inevitable and agree to collectivize national debt within the euro zone?

In any case, Sarkozy let one glimmer of hope peek through. "The good news," he told his ministers, "is that Angela is moving in a sensible direction in terms of saving the monetary union." Left unspoken: "But if it weren't for me...."

A Waltz of Indecision

The French president and the German chancellor are engaged in a dance that some close to the Élysée Palace have described as a "valse-hésitation," perhaps best translated as a "waltz of indecision." It's an endless back and forth that must often seem, to its anxious audience, deliberately designed to confuse. That audience consists of the 15 other members of the monetary union and, worse still, the teetering financial markets.

Following a short telephone conference between Sarkozy, Merkel and Greek Prime Minister Georgios Papandreou last Wednesday, the leaders were only able to reach consensus far enough to issue a bare-bones communiqué, with no new decisions being made. Sarkozy and Merkel declared themselves "convinced" that Greece's future lies with the common currency, while Papandreou reiterated his "absolute determination" to come through on all his country's commitments -- a non-negotiable condition in order for the country to receive the next round of aid, €8 billion ($11 billion), in mid-October.

Beyond that point, confidence remains fragile. Jean Leonetti, the French National Assembly minister responsible for European affairs, claims that the danger of Greece going bankrupt, or even being ejected from the euro zone, is off the table for good. "That's completely out of the question," the minister asserts, adding that this also defuses the threat of the problem spreading to other shaky euro-zone members. "That's a problem only as long as Greece's fate hangs in the balance," he says.

In reality, though, Sarkozy is not quite so sure, despite the fact that his clumsy partner in this political dance, Angela Merkel, has taken some steps in his direction. "We're leaving a zone of turbulence only to enter a possible crash zone," the president says. If it isn't possible to save Greece, or if Greece doesn't want to be saved, he continues, the main aim will be to avoid "at all costs" a domino effect that could spread to "Portugal, Spain and Italy."

It's becoming increasingly difficult for Sarkozy to conceal his rising panic when he runs through that list of countries at risk. And though he wouldn't give voice to such views even within the circle of his closest confidantes, Sarkozy has been aware for some time of the need to add his own proud nation, which has always claimed the role of Europe's visionary, to the list of the sick and the lame.

No wonder, then, that Angela Merkel has to stick by his side and lend a supporting arm as he tries desperately to lead the dance. The music only plays as long as the chancellor promises to pay.

France's financial institutions have drawn the markets' mistrust for having too many bonds from debt-stricken EU nations in their portfolios, not only from Greece, but also from Italy and Spain. As expected, credit rating agencies have downgraded the Crédit Agricole and the Société Générale by one rating level, to Aa2 and Aa3 respectively. That alone isn't a catastrophe, since the banks continue to yield profits and have increased their equity. But a debate over the possibility of partial or complete nationalization quickly flared up, partly triggered by the start of France's presidential campaign season.

And when executives at Paris' banking headquarters start to tremble, the fever spreads quickly to high-level politicians. "I'm not sure if the French people really understand what's going on," Sarkozy has complained. He believes there to be general misjudgement of the situation.

His prime minister, François Fillon, is seized sometimes by a bewildered rage. "I've been trying for two years to shake some sense into the political classes that don't want to believe we're staring into the abyss," he says. "We're on our last legs here."

Sarkozy and Fillon sense it will hardly be possible to maintain the appearance that all is well through to the end of this election campaign. More and more people are sounding the alarm, everyone from financial experts to politicians. Jean Peyrelevade, former head of Crédit Lyonnais, a French bank which has since been bought up and renamed, has diagnosed France as being in "critical condition" and says the country has been in a continuous economic decline for the last 10 years. "With recklessness and arrogance, France continues to live in its economic bubble, convinced it will never burst. The hard truth of statistics is unrelenting in its proof that the opposite is true," Peyrelevade says.

A "State of Emergency" in France

Centrist politician François Bayrou, who obtained nearly 20 percent of the vote in France's 2007 presidential election, has even declared a "state of emergency" for 2012. France is bleeding to death, he says, with unemployment at almost 10 percent, national debt at over 80 percent of the country's gross domestic product, a runaway foreign trade deficit of €56.3 billion and a budget deficit of 5.8 percent that is nowhere near being brought under control.

Following the example of former German Chancellor Gerhard Schröder, a Social Democrat, Bayrou is calling for an "Agenda 2020" for France, which would get the country back on its feet, albeit painfully. It's always Germany which seems to be the successful alternative model.

Taken against this background, France's seemingly selfless declarations that European solidarity is the highest duty start to appear somewhat hypocritical, since France itself is in urgent need of that same solidarity. Sarkozy's weakness as an EU politician, or perhaps even as one of the saviors of the monetary union, is the unfortunate and unaccustomed situation he finds himself in: All of his suggestions are dependent on Germany's approval -- but he has to conceal this fact back home at all costs.

"Sarkozy and Merkel Hand in Glove"

In any case, Sarkozy has accepted that solidarity won't be possible without budgetary discipline and a fastidious financial approach, and he has recognized, in principle, the need to eschew sovereignty in this particular matter, although it goes against his instincts and his temperament. He has deftly divided up roles with Merkel in such a way that in the current tussle, "France stands more strongly for solidarity, while Germany stands for austerity," in the words of Minister Leonetti. Although both sides are inextricably linked at this point -- "Sarkozy and Merkel are hand in glove," Leonetti bravely claims -- the French president still hopes to emerge as the better, more agreeable figure, able to present himself as the watchdog who makes sure Germany's discipline isn't imposed on the much-harassed people "like a lead blanket", in Leonetti's words.

Leonetti only took office in late June, but he has already learned that in Europe's capitals, EU political matters are still judged according to the abilities of individual politicians to assert themselves. Who stood up to whom? Who gave in to whom? These are still the questions that count most.

When he returns from trips to Berlin, the minister reports, people ask him how far Merkel has conceded to Sarkozy, and everyone in Paris is dying to know whether the president has had to defer to the chancellor. Leonetti believes it's time to give up this perception of EU politics as a zero-sum game.

Still, Sarkozy in particular remains stuck in a mindset of intergovernmental power plays, preferring to believe that everything will fall into place if he and Merkel can just reach an agreement. The smaller EU member states, however, are putting up ever more determined resistance to this idea of a German-French directorate.

Leaders in the larger countries, afraid of losing their own hold on power, tend to mistrust the existing common institutions, such as the European Commission and the European Parliament. Instead, when new tasks come up, they prefer to create new institutions to handle them, but without clearly defining the responsibilities of these bodies. This only increases the tumult of voices within the EU, to the detriment of the unity and efficiency to which the political union aspires.

Little to be Gained From "Super Finance Minister" Plan

Confident and experienced members of the EU believe there's little to be gained by adding yet another central authority to the EU's political structure, in the form of a centralized European economic government headed by a "super finance minister", a figure Sarkozy and Merkel would like to see keep watch over the stability of the euro-zone countries.

A more rational approach would be to authorize the European Commission to oversee European economics. For that to be possible, though, at least some of the Commission's personnel would have to be replaced, since neither Sarkozy nor Merkel would trust José Manuel Barroso, the current president of the European Commission, with such a mandate. The Portuguese politician was chosen, after all, precisely because no one wanted him in a serious position. The Commission's initiatives, for example models for the disbursement of euro bonds, or the introduction of a tax on financial transactions, have been immediately overruled or taken out of the Commission's hands. It seems no one is actually that eager to strengthen the capacity for political action at a European level.

The imaginative Green Party politician Daniel Cohn-Bendit, one of the most active members of the European Parliament, has developed an ambitious plan that would allow Europe to find a way out of the political and institutional labyrinth that is the EU, and venture the bold step toward a federation that could be a United States of Europe. So far, though, this plan exists only in Cohn-Bendit's imagination.

The first step would be cutting out the euro skeptics and the "sovereignists" in both Berlin and Paris by forming a governing coalition for Europe that crosses party lines. The second step would be to remove the current Barroso Commission, with the European Parliament's help, and elect a new commission as a European economic government -- with a German as its president. Cohn-Bendit believes this would signal to the markets that they could place their trust in the new body, since stability would be guaranteed.

"That would certainly confuse the markets," jokes Cohn-Bendit, who is politically active in both France and Germany. "Investors wouldn't say anything anymore but 'yes' and 'amen'," he says about the plan that he himself refers to as a dream.

All jokes aside, Cohn-Bendit's proposal is a serious one. He believes Nicolas Sarkozy and Angela Merkel need to have the courage to measure themselves against the great figures of European politics, such as Charles de Gaulle and Konrad Adenauer, legendary founding fathers with a vision of European unity.

Cohn-Bendit believes it's time to end the waltz of indecision. 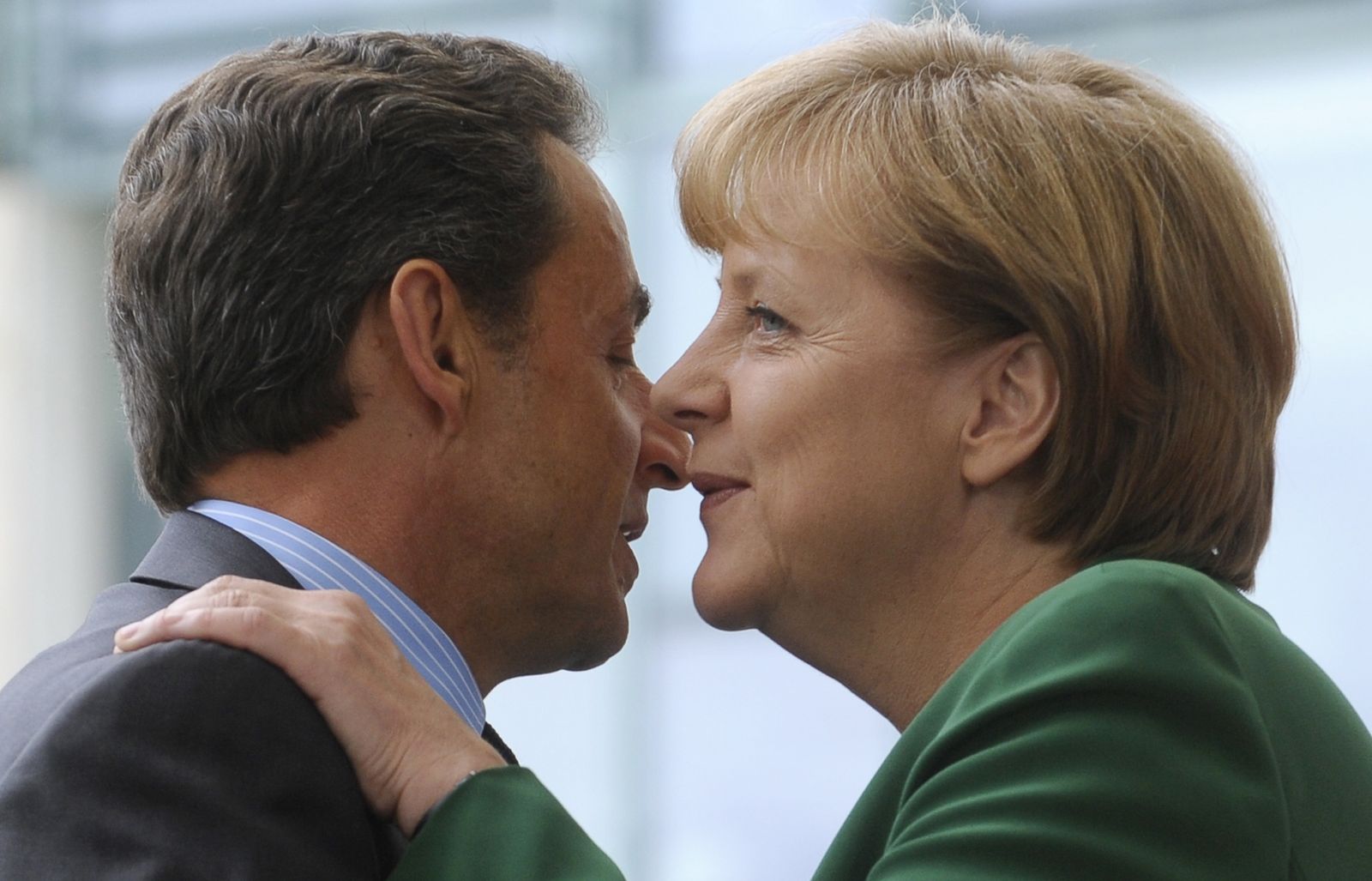 Nicolas Sarkozy and Angela Merkel must find a way forward for the crisis-hit euro zone.