Drawing red lines in the euro crisis is tricky. Many limits have been set in the last months and years: Greece wasn't supposed to get a cent; Germany wasn't going to pay off other nations' debts; the European Central Bank didn't plan on buying junk bonds and on it went. But many of these red lines were later crossed, obliterated, perforated or otherwise forgotten.

Now yet another red line has been overstepped. Contrary to initial assertions, the euro-zone bailout fund will be effectively increased, and with it the formerly untouchable German contribution of €211 billion. Coalition leaders in Berlin are trying to play down the move. Overall, the risk has fallen, says Volker Kauder, parliamentary group leader for the conservative Christian Democrats (CDU). It may not look that way on paper, but somehow it's factually true, he says. Meanwhile Chancellor Angela Merkel reportedly emphasized the psychological benefits of the increase when she addressed her conservatives at a parliamentary group meeting on Tuesday afternoon.

Not everyone among the party ranks is convinced, though the grumbling is going on behind closed doors. Even the notorious euro bailout rebels seem weary of the vain struggle against the ever-escalating bailout billions and risks. But resistance has so far failed to materialize. Only CDU parliamentarians Klaus-Peter Willsch and Manfred Kolbe, already known as frequent challengers of the chancellor's euro policies, spoke out at Tuesday's meeting, saying the risks had become incalculable.

In the end, Finance Minister Wolfgang Schäuble managed to get the parliamentary group to grant him broad authority to support the temporary co-existence of the European Financial Stability Facility (EFSF) and its successor, the permanent European Stability Mechanism (ESM), at a meeting with his European counterparts in Copenhagen on Friday. Just four parliamentarians refused to pledge their allegiance to the plan. Euro rebel Peter Gauweiler, a member of the CDU's Bavarian sister party, the Christian Social Union (CSU), was not present at the meeting. Merkel's junior coalition partners, the pro-business Free Democrats (FDP), didn't hold a vote, but reports indicated that they were also largely in agreement.

A Sense of Resignation

Merkel only recently signalled her willingness to combine the remaining funds of the EFSF with the permanent ESM. With this she had finally bowed to international pressure to strengthen the firewall against the expansion of the euro crisis. The upper limit of €500 billion in credit for the ESM will remain the same, according to these plans. But the ESM would also be topped up with some €190 billion from the EFSF that was already earmarked to aid Ireland, Portugal and Greece. Originally, that money was to have been included in calculations of the ESM's size, but this way the maximum firepower to rescue debt-stricken countries will be increased.

Additionally, the remaining unused EFSF funding of some €240 billion would remain as an emergency reserve until the permanent ESM reaches its full capacity in mid-2013. Initially, its firepower will only be about €200 billion. But according to participants in the parliamentary group meeting, Schäuble said that new aid programs would mainly be funded by the ESM. The ESM could quickly reach its limit within the first year if Spain or Italy are forced to ask for help.

The question of whether this new arrangement increases risks to taxpayers was left unanswered by Schäuble at the meeting. But it will be hard to avoid a higher German liability limit. Currently sums of between €230 billion and €280 billion are in circulation -- well above the €211 billion that had been considered the absolute maximum. The EFSF credit for Ireland, Portugal and Greece will run for 25 years on average, with Germany liable for some €58 billion. This will certainly be added to Germany's ESM guarantees.

Still, the critical inquiries from the conservative parliamentary group were limited on Tuesday. "Yet another U-turn," groaned one MP ahead of the meeting. "But what can you do?" Inside he remained silent like most other participants. The chancellor reportedly assured the group that they would definitely be able to vote on increasing the euro firewall in the Bundestag.

Parliament was expected to vote on the ESM in late May in a bill that will also include legislation on Merkel's fiscal pact, which obliges 25 member states to greater fiscal discipline.

But on Tuesday the opposition, whose support Merkel will need in the vote, insisted on more time to negotiate, saying the fiscal pact must include measures for boosting growth in crisis-hit nations.

Merkel praised the euro firewall increase as "the final step down a logical path," but some conservatives doubt whether this milestone has truly been reached. On Tuesday the Organization for Economic Cooperation and Development (OECD) said the euro bailout package should be increased to at least €1 trillion to help the currency union return to economic health. The European Commission would also like more concessions from Germany, preferring for the ESM and EFSF to both run parallel at full strength, through which their volume would increase to some €940 billion. The best option, in their view, would be the transfer of EFSF funds to the ESM -- which would cause Germany's responsibility to explode, reaching a volume of some €400 billion. "That wouldn't be communicable," a coalition source says.

Schäuble has thus assured the CDU parliamentarians that he will resist these demands. The finance minister will try to "beat the nonsense out of the minds" of his counterparts in Copenhagen, a participant at Tuesday's meeting quoted him as saying. It looks like the next red line is about to be drawn. 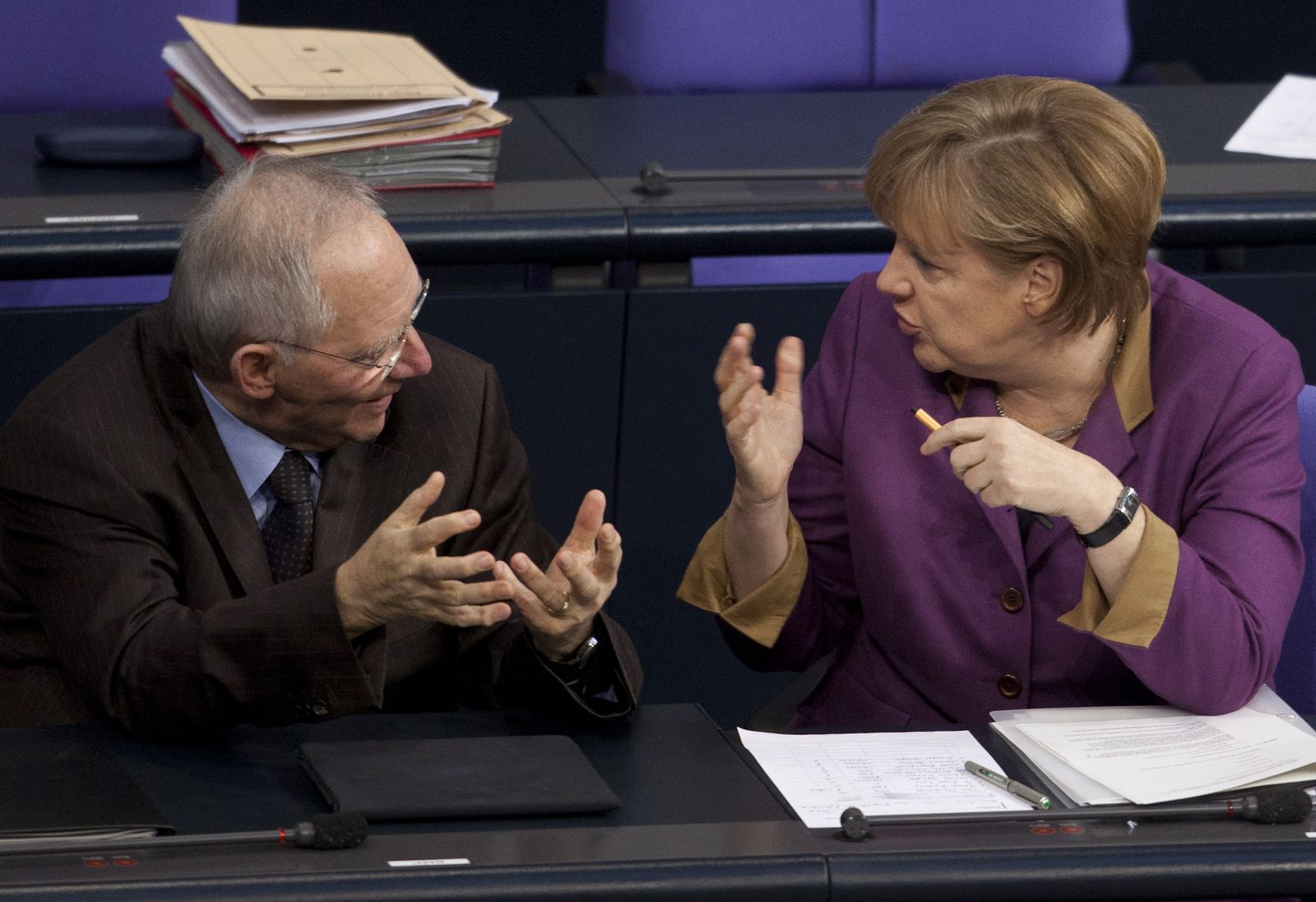