The German government has conceded for the first time that Greece will soon need billions of euros in fresh aid and a restructuring of its debt in order to prevent bankruptcy.

In the letter, the finance minister states that private investors and banks should take over part of the cost of stabilizing Greece. The letter states that the private sector should make a "quantifiable and substantial contribution." The finance minister's preferred course would be a bond swap in which old government bonds would be exchanged for news ones with more favorable terms. Investors would be asked to exchange all the Greek bonds currently in their portfolios for new ones with maturities extended by seven years. Investors would get their money later, but they would still get the full amount.

In effect, Schäuble is calling for a restructuring of Greece's debt. Until very recently, he had argued that the risks posed by such a move would be too high. Indeed, some critics have warned it could have unforeseen consequences that might even be tantamount to a European version of the collapse of Lehman Brothers.

A German Finance Ministry spokesperson described the letter as a "clear marking of the German government's position." Still, it remains uncertain whether Germany will seek to force the private sector to share the burdens -- a move that Chancellor Angela Merkel of the conservative Christian Democratic Union (CDU)and ECB President Jean-Claude Trichet have both rejected so far.

Greece's situation is increasingly precarious. One of the biggest problems for Athens is a condition placed on lending by the International Monetary Fund, which is also participating in the bailout together with the European Union. The condition stipulates that credit can only be given if it can be proved that a country is capable of meeting its payment obligations over the next 12 months. The current plan also envisions Greece returning to the capital markets to raise fresh money starting next year. But with interest rates at around 15 percent, that notion is illusory.

"A return by Greece to the capital markets within 2012, as assumed by the current program, seems more than unrealistic," Schäuble wrote in his letter. But that would also mean that the loans to Greece that have already been agreed to under the current plan will not suffice to cover Athens' actual needs.

Under the original plan, approved one year ago, the government in Athens was to undergo rigorous austerity measures, consolidate its budget and take steps to increase its competitiveness in exchange for €110 billion ($159 billion) in aid.

Initial reports this year suggested Athens would require an additional €60 million in loans, but SPIEGEL reported last weekend that an additional sum of more than €100 billion could be required if Greece is not able to return to the capital markets for its lending needs in 2013 and 2014.

In his letter, Schäuble doesn't specify what Greece's lending needs might be. Nor does he offer much more by way of precise details about how he envisions private sector participation in the restructuring, instead noting that any further aid should "involve a fair burden-sharing between taxpayers and private investors."

Finance Ministry sources told SPIEGEL ONLINE, however, that the government in Berlin is still seeking to prevent a more dramatic "haircut," that would force lenders to forgive and write off a considerable amount of Greece's outstanding debts. A 50 percent restructuring would mean that creditors who lent the country €1 billion euros would only get back €500 million.

Rather than pushing for a haircut, Berlin appears to be calling for a soft restructuring in which creditors would agree to later repayment, and lower interest rates.

That would still harbor considerable risks, though. Ratings agencies have already warned that they might rate even a soft restructuring as a "default." If that were to happen, Greece would be considered insolvent in the eyes of the financial markets and would be unable to raise money through private investors for some time to come. German Finance Ministry sources said plans need to be made that would ensure that a restructuring would not lead to a "default" rating -- a scenario government officials said must be ruled out in light of the potentially catastrophic consequences.

It appears that the only way possible to conduct a restructuring without unpredictable consequences would be to find an agreement with the finance industry that would be palatable for the government and banks. Whether that can succeed is questionable. First, the results of the progress report from the troika comprising the European Commission, the ECB and the IMF must be released on Wednesday in which experts will assess the progress of Greece's savings efforts. But Greece will need money again as soon as July.

In his letter, Schäuble wrote that he sees "the need to agree on a new program for Greece in order to close the financing gap and prevent default."

It is also questionable whether the German government can succeed with its demand for short-term private sector burden sharing, given that other EU member states have rejected the step. The ECB, for its part, also opposes it.

The motivation behind Schäuble's clear wording on Germany's position on Greece may well be driven by domestic political considerations. Within Merkel's conservative government comprised of the Christian Democrats and the business-friendly Free Democratic Party, resistance to additional bailout measures for Greece as well as the creation of a permanent crisis mechanism for the euro zone is massive. The German public also opposes the measures, with many considering the Greek bailout to be a bottomless pit. Schäuble is feeling the pressure from the government coalition, but also from taxpayers footing the bill for Greece, and he is trying to show that Berlin isn't just handing over money and letting banks off the hook.

In light of the astronomical new figures being cited, Gerda Hasselfeldt, a senior state-level figure in the Christian Social Union (CSU), the Bavarian sister party to Merkel's CDU, said aid could not be allowed to become a "bottomless pit." However, many in Merkel's coalition government are afraid it will become precisely that.

Klaus-Peter Willsch, the budget expert for Merkel's CDU, has already said he would vote against any plan for additional financial aid for Greece, because, as he told public broadcaster ARD, "you can't throw good money after bad." He also said he would not allow a decision that could burden generations to come to be made at "breakneck" speed, as some alleged happened with last year's bailout. He said the data doesn't back providing additional bailout money to Greece.

Few, have been as outspoken as Willsch within the conservatives, but he is far from alone in his negative stance within the joint CDU/CSU parliamentary group. Other senior party members have also expressed their discomfort with additional relief measures in recent weeks. Recent news about pension payments to long dead Greek citizens and worries that the troika report will be critical of Greece's savings efforts aren't exactly fostering trust in Athens' austerity measures, either.

Is a Government Revolt Brewing over Greek Aid?

The number of bailout critics is greater in the FDP, Merkel's junior coalition partner, with around 15 members of parliament categorically rejecting any new aid for Greece. The campaign is being led by the FDP's finance expert in the parliamentary group, Frank Schäffler, who hinted Greece should exit the euro zone in an ARD interview. "That wouldn't be the downfall of the euro, it would save it," he said.

It is still unclear whether the Greek debate will lead to a revolt in Merkel's coalition government. Right now, the CDU, CSU and FDP only have a 19 vote lead over the opposition in Germany's parliament, the Bundestag. Nevertheless, Chancellor Merkel has good reason to be nervous about the outcome of a vote on additional aid for Greece as well as planned legislation this autumn paving the way for the European Stability Mechanism, the permanent euro rescue fund. Leaders within the FDP and Christian Democrats know those votes will be close, with one leader saying the issue is "highly uncomfortable ... with even more explosive potential than the nuclear phase-out."

Schäuble faces another potential problem with his calls to force private investors to accept losses as part of the bailout. Namely that it is clear that if the private sector is going to be forced to foot some of the costs of the bailout, it will have to happen soon. The latest figures from the Bank for International Settlements show that many European credit institutions have already shed massive quantities of Greek bonds in the past year. Already today, a considerable amount of Greece's debt has more or less been transferred into public hands -- either through loans from other euro-zone member states or through the state bonds that have been purchased by the ECB. Sooner or later, it is clear, private investors will have completely shed their high-risk Greek investments. 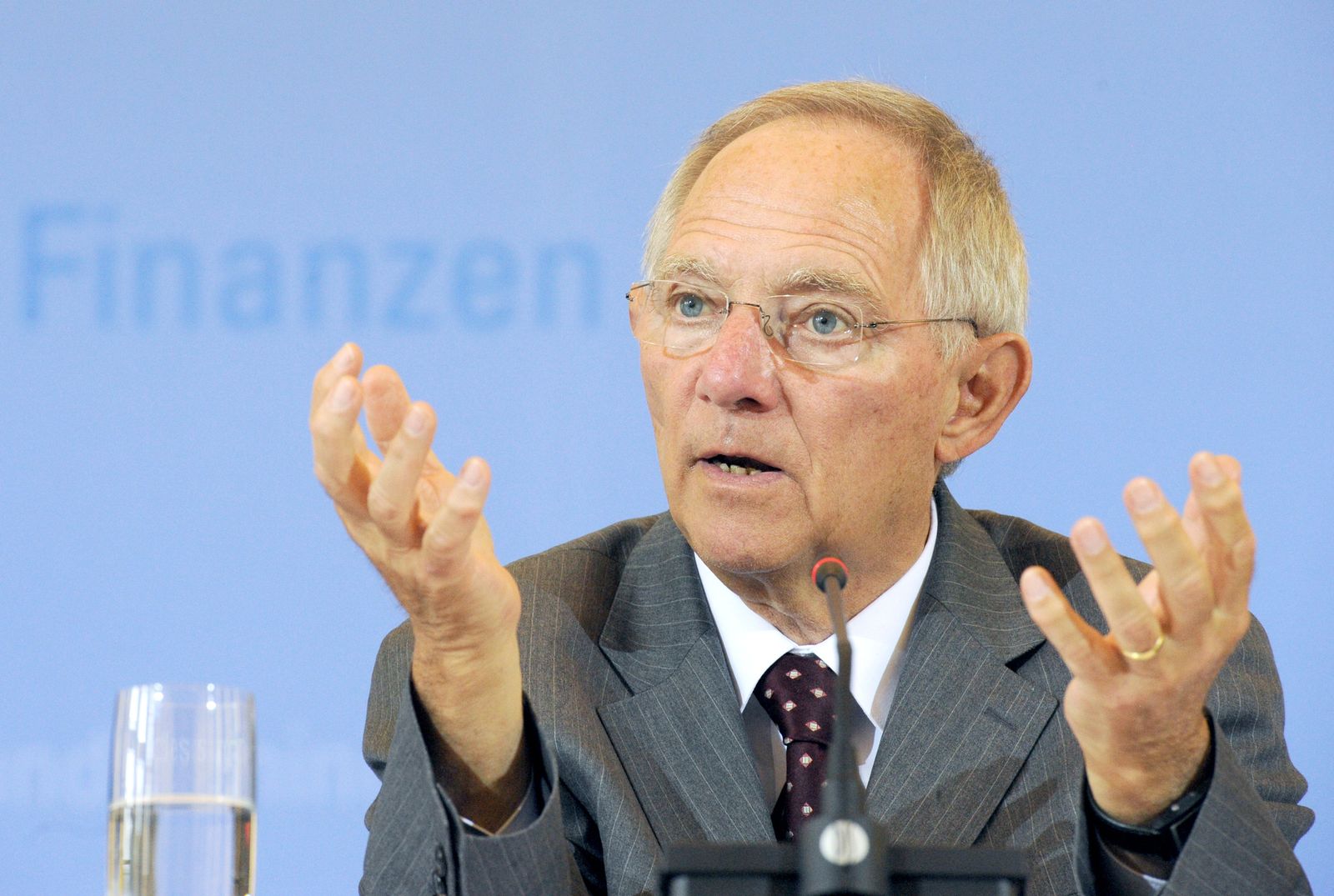