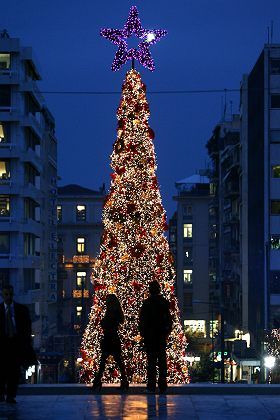 These mythical, goblin-like spirits are said to pop up between Christ's birthday and Epiphany on Jan. 6, days they devote to wreaking their unique brand of havoc. John Tomkinson, the Athens-based author of "Haunted Greece: Nymphs, Vampires, and other Exotica" compares their behavior to "drunken yobs coming out of a pub."

And the unflattering description suits their bawdy antics: "The Kallikantzaroi cause mischief, they intimidate people, urinate in flowerbeds, spoil food, tip things over and break furniture," Tomkinson said.

Opinions differ on what they look like, both because of active imaginations and Greece's once-isolated regions, separated by the Hellenic nation's many mountains and vast seas. As a result, some say the Kallikantzaroi resemble humans with dark complexions, ugly, very tall beings that sport iron clogs. Others say they're short and swarthy, with red eyes, cleft hooves, monkeys' arms, and hair-covered bodies. There's another school of thought which describes them as lame, squinting and stupid. They survive on a diet of worms, frogs and snakes.

For most of the year the Kallikantzaroi live in the bowels of the earth, but they creep out during the Twelve Days of Christmas, venturing out under the cover of night.

The uninvited festive guests are said to sneak into homes through the chimney or, more boldly, by using the front door. And, surprise surprise, Greek families are keen to ward off the gaggles of goblin louts. Some use the legendary precaution of a black-handled knife. Others swear by hanging the lower jaw of a pig behind the front door or inside the chimney. "It's the thing to have over Christmas," Tomkinson said. "Don't ask me why."

Hanging a tangled strand of flax on the front door tends to flummox the dim-witted Kallikantzaroi, who pause to count the threads, a lengthy task which keeps them busy until sunrise.

Fire is another deterrent: many households maintain a crackling blaze in the hearth throughout the holidays. The smoke is said to keep the pesky Kallikantzaroi out of the chimney. On Christmas Eve, the household patriarch tosses a big log from a thorny tree, such as prickly pear or wild cherry on to the blaze. This Christmas log is known as the skarkantzalos, from Kallikantzaroi.

Sometimes an old shoe is burned, the stench of seared leather augmenting the fire's repellant effect. A handful of salt, which gets things crackling, is also said to scare off the beasts.

And Greeks born on Christmas Day are at special risk. That can be construed as trying to upstage Christ and the child can turn into a Kallikantzaroi -- unless the mother binds her newborn with garlic that is.

Christmas Day is also a big day for fires. Greeks toss wheat grains, or the green leaves from an olive tree or walnut tree, onto the hearth. The way they catch on fire predicts whether a person will survive the coming year and whether that person will leave his or her village.

In recent years, the Christmas tree has grown in popularity throughout Greece. But some Greeks prefer the old ways, opting instead for a sprig of basil suspended over a water-filled bowl. Once a day someone in the home, usually the mother of the family, uses the sprig to sprinkle water throughout the house to ward off the creatures.

The only reliable cure-all, however, is when village priests bless the waters on the eve of Epiphany, which marks the end of the Twelve Days of Christmas. They have been known to visit homes to sprinkle holy water fragranced with sweet basil to chase away the evil spirits for another year.

On the eve of Epiphany in Cyprus, villagers scatter pancakes on the roof to give the Kallikantzaroi something sweet to eat as they prepare to head out of town, perhaps to show there are no hard feelings.

Aikaterini Polymerou-Kamilaki, director of the Hellenic Folklore Research Centre in Athens, says the Kallikantzaroi remain popular throughout present-day Greece, even in the cities. But these days they've been relegated to mere myths -- no longer are they the fearsome beasts that prowl the night, no longer are they believed to be real.

"Since the introduction of electricity to even the smallest of villages, there is no longer any reason for someone to fear going out at night," Polymerou-Kamilaki says. "There are lights everywhere now, and not just the dark night."

But it still kind of makes you want to sleep with the lights on.