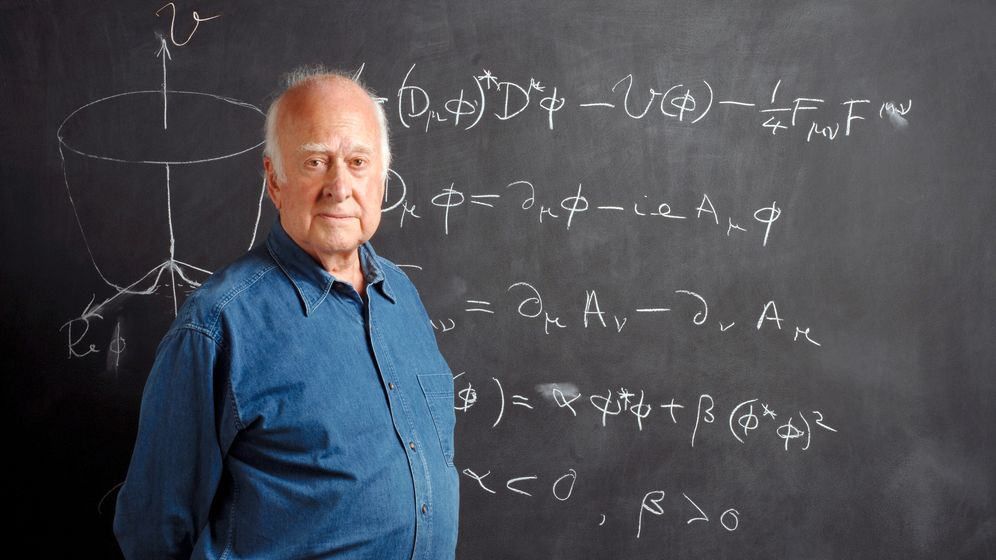 It's about time. For decades, Peter Higgs has been sitting -- and waiting -- in his apartment in an old building in Edinburgh near historic Moray Place. His name has appeared in the newspaper many times during this long period of time.

There were often reports that someone might have uncovered the famous particle that bears his name. But they all proved to be false alarms. This time, though, it looks as though it could indeed be the real thing. Last Tuesday, the CERN research center near Geneva held a seminar on advances in the search for the so-called Higgs boson.

Rarely had the mood been so tense in the facility at the base of the Jura Mountains in Switzerland. The offices were empty, the laboratories were closed and the cafeteria was abandoned. Everyone was crowded into the lecture hall.

Private guards had to be hired to barricade the two entrances because so many researchers wanted to attend the seminar after the news came out. But it is also an ambivalent piece of news. On the one hand, there are new developments in the search for the Higgs particle, and it is possible that it was sighted, with a weight of about 125 hydrogen atoms. On the other hand, there is no solid evidence that this was the case -- only clues. "Very interesting clues," however, as CERN Director General Rolf Heuer insisted again and again. The signal is still very blurry, says Siegfried Bethke, director of the Max Planck Institute for Physics in Munich. The Atlas experiment in which Bethke is involved has generated millions of gigabytes this year. How easy is it to read something that isn't even there into this jumble of data?

The audience reaction was just as ambivalent. "Thank you for this nice Christmas gift," a physicist raved during the public discussion of the results. But someone sitting outside in the hallway, who was forced to follow the meeting on his laptop, called the results "half-baked."

Most scientists agree on one thing: That the data are not really ready for the public. But waiting any longer was unrealistic. Given that upwards of 6,000 scientists from more than 50 countries are involved in the hunt for the Higgs particle, it would have been impossible to prevent new information from being leaked to the public.

There is undoubtedly great interest in the Higgs boson. More than 100 journalists traveled to CERN to listen to the lectures on atomic cross-sections, luminosity and gamma gamma events. It had gotten around that the so-called "God particle" may have been found -- and that it is the first and primary task of the world's biggest particle accelerator at CERN to find precisely this particle. Three billion euros for a tiny particle? It had to be something special.

A visit to the Edinburgh apartment of the man for whom this elusive particle is named reveals what a modest man he is. Peter Higgs is a shy 82-year-old with thinning, white hair and a hesitant smile. In halting, short-winded sentences, he describes the moment he had the only important thought of his life. He remembers clearly that he was sorting magazines in the library when the exciting idea came to him. He can also remember the date: July 16, 1964, almost 50 years ago.

Higgs has not published anything noteworthy since then, and he is keenly aware that some ridicule him for it. "Wagging tongues say that I achieved fame without having worked for it," he says, adding that this isn't entirely incorrect. Higgs' groundbreaking article is only a page and a half long and contains only four formulas.

In essence, Higgs only came up with a simple mathematical trick -- but what a trick it was. It remains fundamentally important for physicists to this day, because it helped them understand the phenomenon of mass.

Breathing Life into the Wasteland

Without the Scottish outsider's trick, the equations in particle physics were boring and tedious. They described a universe populated exclusively by particles without mass. But without mass, neither stars nor planets can arise, and people are completely nonexistent in such a world.

To breathe life into this wasteland, Higgs proposed that the universe is filled with a sort of soup of invisible particles. All matter that moves through this fluid takes along a small amount of this soup, and the resulting inertia gives the particle mass.

To imagine this free-rider effect, CERN theoretical physicist John Ellis compares the universe to tidal flats. "The particles have shoes, so to speak, to which the mud sticks," he says.

With his trick, Higgs had provided physicists with a tool to repair their equations. They were thus able to formulate the Standard Model of matter that represents the worldview of physics to this day. All that physicists had to do was prove the existence of the Higgs particle.

It's nothing unusual in physics for a particle to be discovered on paper first and later in the laboratory. In the case of antimatter, four years passed between the idea and the discovery, and it took more than 20 years for scientists to detect the neutrino. But the span between idea and discovery has never been as long as it has been with the Higgs boson, making the search for it the longest hunt for a particle in the history of physics.

In increasingly powerful underground accelerators, scientists allowed electrons, protons and their antiparticles to crash into one another with ever-increasing force -- with more and more energy being produced in the process.

The charm, bottom and top quarks were discovered one after another, just as the theoretical physicists had predicted. Then came the muon, the tau and the tau neutrino. All the building blocks of matter were discovered sooner or later. All but one: the Higgs.

Was Higgs' theory wrong? Was matter created in a different way?

Eleven years ago, physicists at CERN believed that they had captured a fleeting glance of the Higgs particle in an accelerator called the Large Electron-Positron Collider, or LEP. They believed that they could recognize signals of its data, albeit very weak ones, in a collision which produced an amount of energy that was a little more than 100 times that of a proton.

What's Next for Physics?

But the management at CERN did not give the Higgs hunters the time they needed in the LEP to get to the bottom of the riddle. There were plans to build a bigger particle accelerator, which meant that the old one had to go to make room for it. For an entire decade, the physicists at CERN had to turn over the field to their competitors in the United States, who continued the hunt for the Higgs in the Tevatron particle accelerator near Chicago.

While work progressed on the Large Hadron Collider (LHC) near Geneva, the European scientists were forced to look on as their rivals working at the Tevatron were slowly moving toward their goal. Would the Americans snap the trophy away from them in the home stretch? This concern is now a thing of the past. The Tevatron has been shut down since October.

The power center of high-energy physics has shifted as a result. For about 70 years, since the time when the Manhattan Project resulted in the construction of the atom bomb, it was on the other side of the Atlantic. European scientists now hope that the discovery of the Higgs particle will mark the beginning of a new era, and that the physics of the 21st century will be formulated on the old continent. Geneva is the discipline's new nucleus.

The competition that once involved scientists on both sides of the Atlantic is now taking place exclusively within CERN. Two enormous detectors, the Atlas and the CMS, are competing to be the first to spot the Higgs. "The competition is egging people on," says CERN Director General Heuer.

Both research groups use the same proton beam, and both reside in building 40 on the CERN grounds. They face off against each other in the building's circular atrium, where the logo of the Atlas experiment is displayed to the right of the entrance and a five-story, life-sized photo of the CMS group's detector hangs on the left side -- a challenge to their competition.

On Tuesday, the two groups made a noticeably different impression. The Atlas people adopted a cautious and muted tone. "We're not getting a real Eureka moment with the Higgs. The search took too long for that," says Max Planck scientist Bethke. But Guido Tonelli of CMS, an energetic Italian from the University of Pisa, was more enthusiastic: "It was on Nov. 8, my birthday, that I first had the feeling that we are on the verge of a breakthrough."

The challenge for both research groups is to sift through the storm of particles that rain down on their detectors from the accelerator to find those that stem from the decay of a Higgs particle. It almost seems as if nature had done its very best to mock their curiosity. Nowhere is the search more difficult than in the energy range of about 125 times the mass of a proton, in which the scientists now believe they have located their target.

According to the theory, Higgs particles are created by the minute, but the overwhelming majority of them are irretrievably lost in the shower of particles. Only about one in 1,000 Higgs particles decay in high-energy gamma quantums -- and these, the scientists hope, are the rare moments in which the particle could be detected.

But the number of such events is still too small for physicists to be convinced that they are right. Nevertheless, they are encouraged by the fact that both the Atlas and the CMS scientists are seeing similar signals. The two groups agree that the matter should be resolved by no later than the end of next year. "To be or not to be," says Heuer. "In one year we will be able to answer the Shakespearean question."

And then? Will the blues set in, once everything has been found that there is to find?

Heuer would be a poor laboratory manager if he had no answers to these questions. For him, what feels like the end of a decades-long hunt for a particle really marks the beginning of a new era. For about 80 years, scientists endeavored to find what the theoreticians had long predicted. Now Heuer and his colleagues want to embark on the exploration of real virgin territory.

The theoreticians have also sent out shock troops into the terrain beyond the Standard Model. They have no lack of ideas about what holds the world together in its innermost fabric, ideas about hidden additional dimensions, superstrings and parallel universes.

But all of these intellectual games move within the realm of speculation. The theoreticians can make no progress without solid laboratory data.

That's exactly what the LHC in Geneva is now expected to provide. CERN director Heuer describes the mystery to be addressed: "Only 4 percent of the universe consists of visible matter. The rest is dark energy and dark matter." Fabiola Gianotti, the spokeswoman for the Atlas experiment, puts it in somewhat more poetic terms: "What we know is like a droplet, but what we don't know is like an ocean."

Scientists already have their eye on a candidate for what could make up dark matter. It goes by the melodic name of neutralino.

This tiny particle stems from a concept that assumes that each particle has a hidden partner. The idea is called "supersymmetry," nicknamed "Susy." According to the theory, one of the Susy partners, the neutralino, has precisely the properties that are attributed to dark matter, which is why it's at the top of the LHC physicists' to-do list.

Supersymmetry could also revive the hunt for the Higgs particle. Its theories do not just provide new partners for quarks, electrons and neutrinos, but also conceal other Higgs particles -- at least five, say the theoreticians.