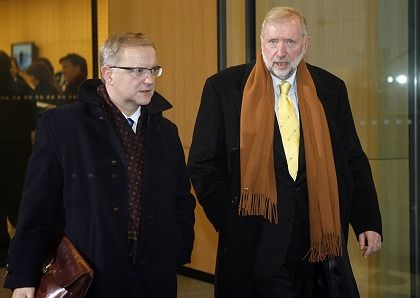 Fresh at the helm of the European Union's six-month rotating presidency, Slovenia is calling for talks aimed at Serbian membership of the elite club to start soon.

Slovenian Foreign Minister Dimitrij Rupel said Tuesday his country would like to see Serbia move forward towards EU membership as quickly as possible. Slovenian leaders are seeking to broker a deal with other EU member states to enter into a Stablization and Association Agreement (SAA) with Belgrade, the first offical step towards membership.

"I am one of those who believe the SAA should be signed as soon as possible, possibly by the end of this month," Rupel said, according to Reuters, "but some of our colleagues have to be persuaded this is a good idea."

Kosovo is expected to announce its intention of declaring independence in the coming weeks, and the EU would like to hand an olive branch to Serbia -- where pro-European President Boris Tadic is facing upcoming elections. A week ago, Serbian Prime Minister Vojislav Kostunica said the European Union would have to choose between closer ties with Serbia and support for an independent Kosovo.

Nevertheless, all 27 EU member states must agree to allow Serbia to sign the pre-entry deal before its membership application can proceed and complex accession negotiations can begin. Previous efforts to reach a pre-entry deal with Serbia have been scuppered by Belgrade's failure to arrest and transfer top suspected war criminals, including former Bosnian Serb commander Ratko Mladic, to the United Nations War Crimes Tribunal on the former Yugoslavia in The Hague. The court indicted Mladic on charges of genocide for his role in the siege of Sarajevo and the massacre of 8,300 Bosnian men and boys in Srebrenica in 1995.

The EU commissioner in charge of enlargement, Olli Rehn, maintains his position that Serbian leaders must make a more serious effort to cooperate with the tribunal before any meaningful discussions on membership can take place. Rehn said full cooperation with The Hague tribunal "will be the essential condition for the signature of the SAA agreement with Serbia."

Slovenian Foreign Minister Rupel himself conceded on Tuesday that the decision would ultimately be up to the EU and its member states. To help expedite Serbia's accession, he said the Slovenian EU presidency and the European Commission would propose the creation of a special "Serbia Task Force" with the goal of increasing Belgrade cooperation with the tribunal and fast-tracking Serbian accession.

Serbia, meanwhile, has asked the EU to abandon plans to send a peacekeeping mission to Kosovo, its breakaway province, as a condition of Belgrade signing on to any pre-entry deal.

Last month EU leaders gathered to discuss potential unrest in Serbia, but failed to reach a common position on how to react if Kosovo's ethnic Albanian majority were to declare independence in the coming months. The bloc did, however, decide to send 1,600 peacekeepers to Kosovo.

Serbian Prime Minister Kostunica has said that deploying an EU mission in Kosovo would be tantamount to recognizing the province's independence -- a status vehemently opposed by Belgrade.

Kosovo's potential declaration of independence is expected to be a major issue in the presidential election that will be held in Serbia on Jan. 20. Rupel said Tuesday that the EU hopes "democratic forces" win the election. Despite growing nationalism in the country, he said he believes most Serbs support a move toward EU membership.