Following reports on "black site" prisons in Poland, ABC News is now reporting that a third jail existed in the Lithuanian capital Vilnius. According to the report, as many as eight prisoners were held there for at least one year.

The United States is believed to have used the third black site prison in Europe to hold high-value al-Qaida suspects after the Sept. 11 terrorist attacks and to question them using "special interrogation techniques." These included the simulated drowning of prisoners through the practice known as waterboarding. With the development, the debate in America over government interrogation techniques and torture appears to be taking on a greater European dimension.

ABC News reports that the site wasn't closed until late 2005, after newspapers and TV stations first reported on secret prisons in Europe used by the US after the 9/11 attacks. The broadcaster cited former CIA sources either directly involved or briefed on the secret program to detain the suspected al-Qaida terrorists in Europe.

The US intelligence agency refused to comment on the report. "The CIA does not publicly discuss where facilities associated with its past detention program may or may not have been located," CIA spokesman Paul Gimigliano told ABC News. "We simply do not comment on those types of claims, which have appeared in the press from time to time over the years. The dangers of airing such allegations are plain. These kinds of assertions could, at least potentially, expose millions of people to direct threat. That is irresponsible."

The Lithuanian government approved the secret prison because it was interested in improving its relations with the US, a former CIA agent told ABC News. The country, however, wasn't offered any incentives for its cooperation. "We didn't have to," a former intelligence official in the program said. "They were happy to have our ear."

The Lithuanian Embassy in Washington has denied the existence of a secret prison in the Baltic state. However ABC News claims to have seen flight logs that document flights between the various secret prisons in Lithuania, Thailand, Afghanistan, Poland, Romania and Morocco.

"We've known for a long time that there had to be a third site in Eastern Europe," John Sifton of the New York-based human rights organization One World Research told SPIEGEL ONLINE. "But unfortunately we never knew where it was."

Sifton has also obtained records which show flights to Lithuania, mainly in 2004 and 2005. Aircraft belonging to the company Richmor Aviation, which has been proven to have carried out flights on behalf of the CIA and which has repeatedly come under suspicion of transporting prisoners for the intelligence agency, landed in Vilnius on several occasions. "Admittedly that is not proof, but it is at least a significant piece of evidence," says Swifton.

Additionally, a cargo plane with the number N8213G, which also belongs to one of the CIA's partner companies, is alleged to have flown to the Lithuanian capital Vilnius. One theory is that the cargo plane may have been bringing food and other supplies to the black site. However, aircraft did not always fly directly to Vilnius -- some flights also took place via Poland.

A Gulfstream jet with the tail number N379P, known as one of the so-called "torture taxis" used to carry out renditions, often landed at the small Szymany military airport in the northeast of Poland. The Americans maintained a secret prison about an hour's drive away from Szymany, where Khalid Sheikh Mohammed, the self-described architect of the 9/11 attacks was held, among other prisoners. In March 2003 alone, Mohammed was subjected to exactly 183 incidences of water boarding -- an average of eight times a day. The Polish secret service is alleged to have put 20 of its own agents at the CIA's disposal. A Warsaw prosecutor has been investigating the former Polish government for abuse of authority for over a year.

Khalid Sheikh Mohammed later told a team from the International Red Cross, who questioned him in late 2006, that he thought he had probably been held prisoner in Poland. "I think the country was Poland," he said, according to the Red Cross report. "I think this because on one occasion a water bottle was brought to me without the label removed. It had (an) e-mail address ending in '.pl'. The central-heating system was an old-style one that I would expect only to see in countries of the former communist system."

If the allegations against Lithuania are confirmed, it could lead to further investigations. Like Poland and Romania, Lithuania has signed the United Nations' Convention Against Torture. 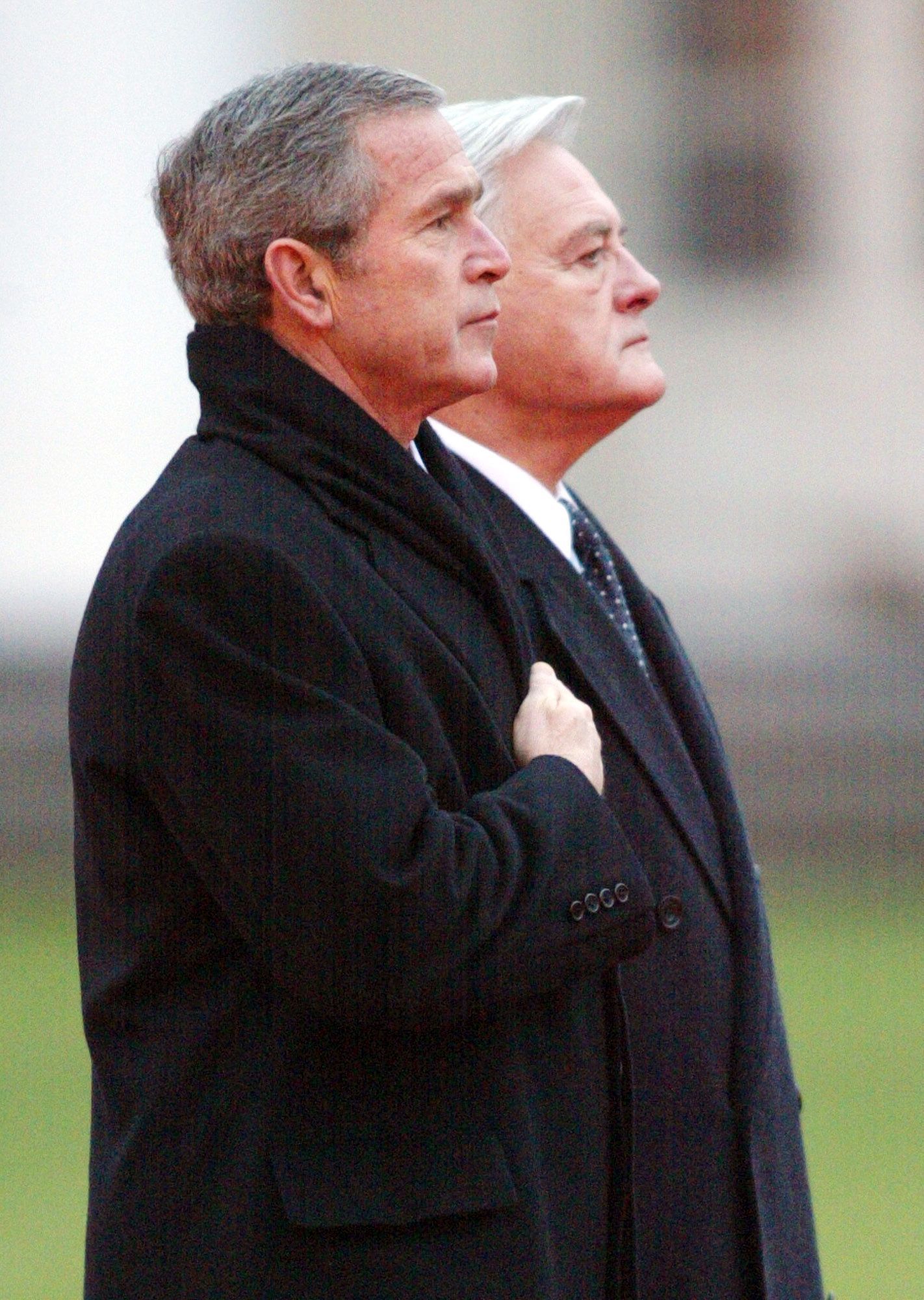 Former US President George W. Bush with former Lithuanian President Valdas Adamkus in Vilnius in 2002: "They were happy to have our ear."