North of the Arctic Circle, winter days end before they truly start. Steinar Eliassen urges his employees to work quickly. "Let's take advantage of this bit of daylight," he tells his workers.

He squeezes his powerful frame into a full-body suit made of Gore-Tex and faces a force seven gale. The temperatures on Stor Fjord in northern Norway are so low that the sea foam turns to ice on the metal braces of the ship. The deck is as smooth as the surface of a bowling alley.

"It's no good," says the 58-year-old, reaching wearily for the dip net. "We have to be able to see the fish with our own eyes."

They are docked to a floating double tube that forms a broad circle in the seawater -- about 30 meters (97 feet) in diameter. The tubes, secured in the fjord with anchors, are topped with a knee-high fence. Tens of thousands of cod are swimming within the circle, surrounded by a tightly woven net suspended beneath the surface.

Eliassen's mood improves as soon as the first fish swims into his net. Its three back fins are well-developed, and the light-colored stripe along the side and bronze spots on the skins shimmer in the light. "This one is a real bodybuilder," says Eliassen, the manager of this fish farm. Cod is normally an elongated fish, but this one has an arched back and a muscular body. "Only a fish from an aqua farm can look this powerful," says Eliassen.

The Norwegian native manages one of the world's first large farms for cod. His company, Norfra, shipped 3,500 tons of fish southward last year (out of a total of 12,000 tons of farmed Norwegian cod). The popular and overfished cod -- a wild hunter with a charismatic little goatee -- was long believed to unsuitable for life in a farm. It had proved impossible to raise in captivity, at least under industrial conditions.

But now the Norwegians have domesticated the species, and farm-raised cod even has its own lucrative niche in the culinary jet set. If fish farmers like Eliassen have their way, cod may regain its status in the food chain as an abundant fish -- for the British, who like it deep-fried, for the Spaniards and Portuguese, who prefer it salted, and for the Icelanders, who use the liver and stomach for sausage.

The Fall and Rise of Cod

The Vikings, nourished on the vast cod populations of the North Atlantic, sailed to Newfoundland long before Columbus "discovered" America. Vitamin-rich cod liver oil helped revive the hungry populations of postwar Europe, and the British and Icelanders engaged in the so-called cod wars in the 1950s and 1970s. But as fishing fleets grew, the predatory fish was almost wiped out. Anyone who buys cod at a fish counter today risks angry looks from environmentally conscious customers.

Cod from the North Sea, for example, is considered questionable because populations are low and bottom-trawling destroys life on the ocean floor. Environmental organizations also advise against buying cod from the Baltic, which is hopelessly overfished. 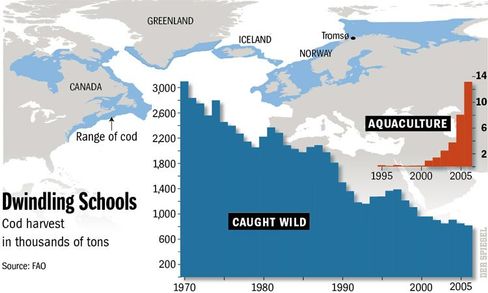 Cod harvest, then and now

Environmentalists are more sanguine about fish farms. The World Wide Fund for Nature (WWF), for example, has specifically praised farm-raised fish as the saviors of wild populations. Migros, a major Swiss retail chain that has sold farm-raised cod since last May, is a member of the WWF's so-called Seafood Group of companies that take an active role in protecting the ocean.

Even chefs in gourmet restaurants are excited about farm-raised cod, which foodies now consider tastier than its wild cousin. "The meat is firmer and whiter," says Eliassen. The filets also have less of a fishy odor.

Scientists aren't quite sure why this is the case, but it must have something to do with the proteins in the muscle tissue and the water content of the meat. A survey of 90 European gourmet chefs added that farm-raised cod takes less time to cook than the wild fish.

Eliassen's customers include the chain of brasseries operated by French celebrity chef Paul Bocuse in Lyon. A gourmet food store on the Hamburg waterfront, Frischeparadies Goedeken, also gets its fish from Norfra. "The cod meat gets soft in the fishermen's trawls," says Christian Frerks, the fish buyer for Frischeparadies.

Cod, with its low-fat meat, is not well suited for freezing, because freezing temperatures can destroy the sensitive cell structure in the muscle tissue. "Cod," says Eliassen, "is very sensitive." It loses flavor when it's old or defrosted.

Fish farms, it seems, can deliver a fresher product than fishermen. Some cod caught in the open ocean spoils before it reaches land. Eliassen and his fellow fish farmers use pumps and thick hoses to suck the fish out of their tube-and-net cages. The fish is immediately slaughtered and processed in a plant. "If we load the fish onto a truck on a Thursday morning, it ends up on German plates by noon on Sunday," says Eliassen, as he removes ice from the fence of his cod cage.

A greenish light placed inside a farm net simulates the summer's midnight sun. "We want to discourage them from reproducing," Eliassen explains, keeping an eye on black plastic tubes being lowered into the net. The noise coming from the tubes sounds like candies swallowed by a vacuum cleaner. "Fish food," Eliassen explains. He pumps 1.1 kilograms (2.4 lbs.) into his cages for every kilogram of fish harvested -- a good ratio compared with other farm-raised fish or prawns.

Eliassen places two or three of the brown pieces of fish food in his mouth. "They taste too rancid," he tells an employee. "You should discuss it with the manufacturer." If the fish food tastes bad, he says, so does the fish.

Gourmets can thank Atle Mortensen for cultivating these tasty denizens of the sea. Mortensen is director of Norway's National Cod Breeding Center and one of the leading scientists at the Nofima fishery research institution in Tromsø, in northern Norway.

Cod is much more difficult to farm than salmon, explains Mortensen, a biologist who sports a crew cut. "Salmon swims around placidly in the enclosure," says Mortensen. "Cod is constantly searching for an opening in the net."

As a result, the breeders need double-walled enclosures. But the crucial factor in taming this slippery creature was to unlock the mysteries of how it raises its young, especially how young cod feed. "This plays less of a role with salmon," says Mortensen. The salmon larvae's yolk sac contains enough nutrients to feed them at first.

But cod larvae must eat algae and zooplankton immediately after hatching. The early stages of industrial-scale cod reproduction can be seen at the breeding station near Tromsø. Robot arms unload food into gray tanks. The tanks contain the twitching larvae. They're lined up in long rows in a factory building. The feeding machine drops food into several hundred meters of tanks.

About 200 cod families served as the genetic foundation of a new generation of farm cod, bred in high-tech vats in 2003. They were sexually mature in 2006. Students from the university in Tromsø armed with plastic syringes worked as inseminators. The next generation of fish are now swimming around in five-meter plastic tanks.

A chip has been implanted into the stomach of each of the more than 100,000 fish. "That's how we keep track of their family relationships," Mortensen explains. Otherwise inbreeding would spread through the artificial brood.

Young cod are measured and checked for parasites, and immunological analyses are performed on their blood. Only the strongest specimens are bred in the spring. The results of this selective breeding procedure are impressive. Cultivated cod grows twice as fast as wild cod, Mortensen reports.

The zoologist wants to push this accelerated evolution even further. Norwegian genetic scientists are currently sequencing the genetic makeup of cod. "We want to find the genes that are pivotal for growth and the body's defenses," Mortensen says.

As little as possible is left to chance -- and nothing to nature -- when it comes to the farm-raised fish. Mortensen sees no problem in further fine-tuning these families of cod. "This is exactly why top chefs like it so much in the first place."