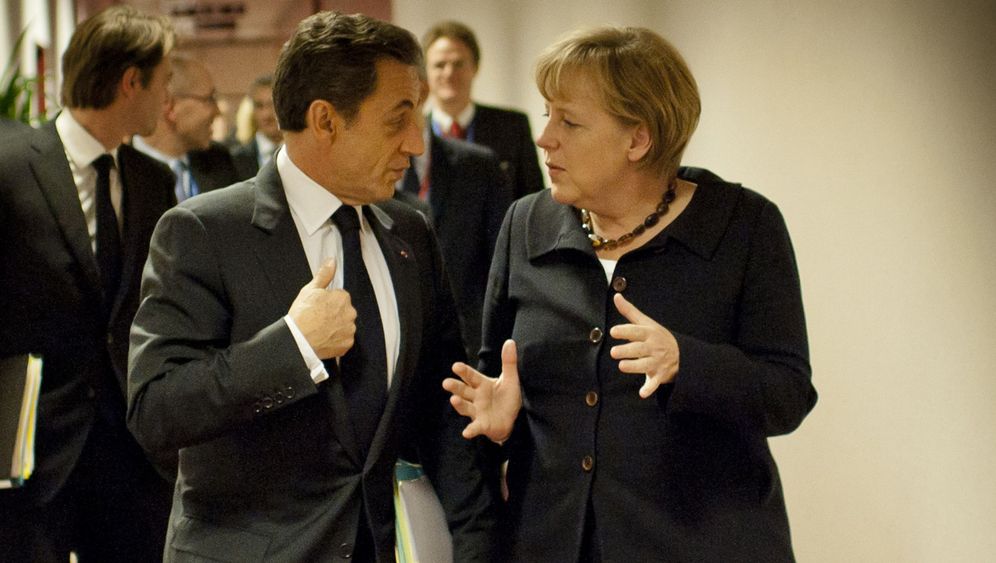 When it comes to French economic competitiveness, Guy Maugis has a front row seat. The 58-year-old is president of the German-French Chamber of Commerce and head of Bosch France. Some 8,400 people work in the French subsidiary of the German electronics giant and Bosch France long enjoyed a cost advantage over its parent company. "But we've completely lost it in the last 10 years," says Maugis.

Maugis' observations are reflected in the data as well: The French economy is losing its competitive edge. Productivity has declined dramatically and the balance of trade is chronically negative.

And now the country is also being sucked into the euro crisis. Last week, the ratings agency Moody's threatened that France's top AAA rating could be in jeopardy unless the government makes an effort to get its finances under control in the next three months. The country's national debt of €1.7 trillion ($2.3 trillion) is equal to 84.7 percent of economic output, the highest debt-to-GDP ratio of all euro member states with triple-A ratings. The weak growth of the French economy is already insufficient to reduce the country's budget deficit to below 3 percent -- as called for by EU rules -- by 2013 as planned.

The country's banks are also in trouble. All three major ratings agencies -- Moody's, Fitch and Standard & Poor's -- downgraded several top French banks not long ago, including Société Générale and Crédit Agricole. Furthermore, even as President Nicolas Sarkozy and his cabinet ministers tried to allay the public's fears, the Belgian-French bank Dexia was on the verge of bankruptcy. Since then, hardly a day has gone by without renewed speculation over the troubles facing the country's large financial institutions.

French banks are invested far more heavily in Greek and Italian government bonds than their European competitors. In late March they owned €53 billion in Greek debt, making them Greece's largest creditor. There are serious concerns that a new bank crisis would stifle already weak French growth and drive up government debt even further. Indeed, Sarkozy would like to see the euro backstop fund, the European Financial Stability Facility (EFSF), take the lead in recapitalizing French banks rather than the government in Paris.

His greatest concern is France's top rating. Should that be lost, it would mark the point when the euro crisis will have finally eaten its way into the core of Europe. The funding of the EFSF, and with it the fate of the monetary union, would also be in the balance.

But Sarkozy's room for maneuver is shrinking as next spring's election approaches. In light of the precarious financial situation, the austerity package currently in the works seems woefully inadequate. The plan calls for little in the way of government spending cuts, while taxes on alcohol, soft drinks and supplementary health insurance are increasing.

"France has a chronic fiscal problem, no matter what the rating agencies are saying at the moment. That's why there can be no progress without real reform," says Stéphane Boujnah, the head of Santander Bank in France and the co-founder of a think tank called "En Temps Réel" (In Real Time). "French politics has gotten used to incurring debt. Austerity is virgin intellectual territory for politicians. It's sort of like expecting geese to look forward to Christmas."

Indeed, France has lived beyond its means for 37 years. The last balanced budget was in 1974. "Toujours plus" ("Always More"), a 1982 book by François de Closets, is being quoted a lot these days. "We are indeed the country of more and more," says Maurice Lévy, head of the Publicis advertising agency and one of the signatories to an open letter to the president calling for higher taxes on wealthy people like him. "France has borrowed money to pay for things, without considering that we'll have to pay the bill one day."

A Pyromaniac for the Fire Department

For decades, all French presidents have employed the same basic recipe: upping expenditures while lowering taxes. As a result, the number of tax loopholes has grown to a respectable total of at least 500 today. They includes such bizarre provisions as tax relief for truffle hunters, and a discount on the capital gains tax applicable to the sale of show horses or real estate in French overseas territories.

Hardly anyone has expanded the list more energetically than Sarkozy. A reduction in the value-added tax for bars and restaurants alone costs the state €2 billion a year. Many restaurants post a sign on their front door that reads: "VAT is going down, and so are prices." But consumers have hardly noticed the cut. And despite the debt crisis, the campaign gift to bar and restaurant owners is not up for discussion.

In August, the Socialist opposition leader, former Finance Minister Laurent Fabius, fumed that having Sarkozy as France's top austerity commissioner is like a "pyromaniac suddenly becoming head of the fire department."

As necessary as a rigorous austerity program would be, "if the government does not quickly address serious reforms, France will lose even more market share," says Michel Didier, president of Coe-Rexecode, an economic research institute with close ties to the employer lobby. He wants to see the government help the country's export industry get back on its feet. The problem with the French economy is that it lacks the backbone of mid-sized companies that are partly responsible for strong exports in Germany. And nothing much has come of politicians' campaign promises to make France the country of entrepreneurs once again.

Robert Lohr is all too familiar with the problem. His family-owned business, Lohr Industrie, headquartered in the Alsatian village of Hangenbieten, employs about 2,000 people and is the world market leader in the production of car transporters. From his office window, Lohr has a view of a large, idyllic park.

And yet sometimes Lohr wishes he could relocate the company. In fact, only 20 kilometers (13 miles) would already be enough to make his life easier. "In Germany, politicians listen to industry, because they are dependent on mid-sized companies. But in France the government is only interested in the biggest companies," says Lohr, whose company is one of the country's important but not well-known businesses. The country's biggest industrial firms include companies like electronics manufacturer Alstom, which produces the TGV high-speed train and its successor, the AGV, as well as defense giant Thales.

Particularly the introduction of the 35-hour workweek, a centerpiece of French economic policy, cost Lohr a lot of money. "It was a catastrophe," says the entrepreneur. Wages went up and productivity suffered. "It wasn't a problem as long as there was enough work. But now we don't have enough work."

Lohr is also up against high social security costs. French employers pay up to 49 percent of gross wages in taxes, compared with only 28 percent paid by their German competitors. On the whole, labor costs increased by 39 percent between 2000 and 2010. In Germany, by comparison, labor costs went up by only 19 percent in the same period.

What is driving up costs, most of all, is the army of employees in the public sector. About one in five workers in France draws a salary from the government. Private companies, says Bosch France chief Maugis, must bear the burden for the state's ever-climbing expenditures.

The French have recently begun looking with envy to the "modèle allemand," or German model. The papers are full of tables and charts, all showing Germany at the head of the pack.

The French are suddenly treating the labor market reforms of Germany's package of reforms known as Agenda 2010 as their blueprint. But they are also impressed by the social partnership that exists in Germany between employees and employers, and not just on the labor side of the equation. "The strong cooperation between labor unions and business helped companies to remain flexible during the crisis," says employer lobbyist Didier.

This admiration for the German approach is new. Only last year, Berlin had to listen to then French Finance Minister and current International Monetary Fund head Christine Lagarde tell them that German frugality was detrimental to consumption in neighboring countries. In the country of savoir-vivre, it was felt that German discipline was somehow small-minded. But now, according to a survey in the magazine Le Parisien, the French have more confidence in German Chancellor Angela Merkel than they do in President Sarkozy.

"Europe is a constant beauty pageant, and Germany has just won," says Jean-Paul Fitoussi, an economist at the OFCE economic institute and an advisor to the prime minister. But he also warns: "If we try to improve our competitiveness by taking the same approach as Germany, it will be at the expense of other countries in Europe." There is only one way out of the crisis for everyone, says Fitoussi: more Europe.