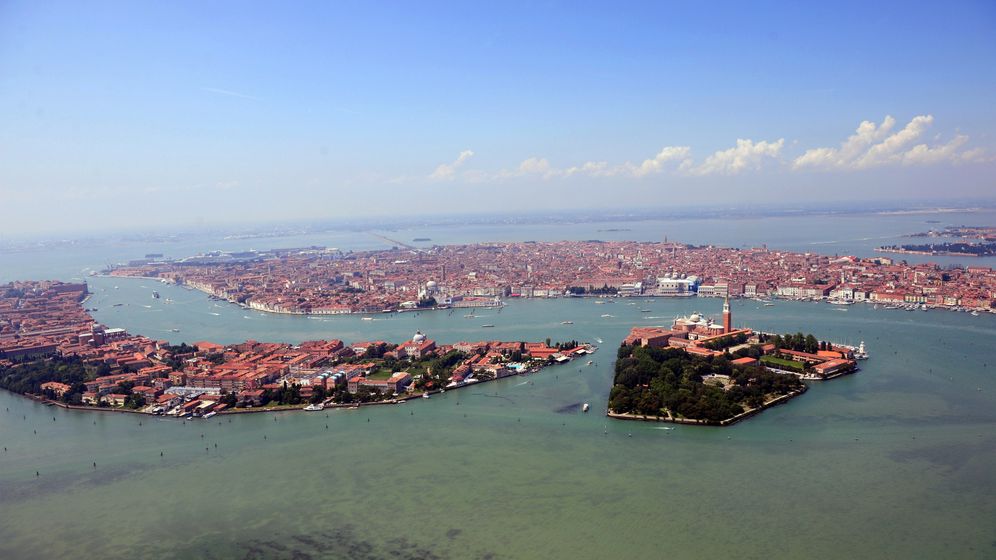 The grinder grates, the pump hums and then out comes the espresso -- and Fabio De'Longhi begins explaining the most important elements in making a decent cup of coffee: the beans, the amount, the water, the temperature and, naturally, the machine. He reaches for a plastic cup. A plastic cup? "It keeps it hot longer," he says apologetically.

De'Longhi, CEO of the eponymous espresso machine manufacturer, is standing in the waiting room outside his office, operating his best machine: a fully automated espresso maker with a color display and adjustable milk froth consistency, from liquid to creamy. The "Prima Donna Exclusive" retails for €1,999 ($2,478). The man from Treviso is Italy's model businessman, 43 years old, handsome, and the kind of man who likes to take off his jacket and roll up the sleeves of his custom-tailored shirt. He has headed the company since 2001.

His father, Giuseppe De'Longhi, built the business and Fabio turned it into the global market leader, with €1.8 billion in sales in 2011, more than a 10 percent increase over the previous year. He also boosted profits by more than 20 percent. The company is expected to continue its winning streak this year, in the midst of a European and, more specifically, Italian crisis.

De'Longhi is among a series of companies with deep roots in Veneto, a region stretching from Venice and Padua to Belluno in northeastern Italy. They are family-owned companies, many of which have only been around for two generations, but they have already attained international success.

Disconnected from the Malaise

The Benetton textile dynasty is headquartered in Veneto, as are shoemaker Geox, fashion companies Replay and Stefanel, and Luxottica, the world's largest eyewear company, with brands like Ray-Ban and Persol. These and other companies ensure that Veneto, and particularly the Province of Treviso, is in better shape than almost any other part of Italy. The region has the highest density of companies in Italy and almost the lowest unemployment rate: Only 6 percent of the labor market is out of a job. Veneto has an annual per-capita GDP of €30,000 ($37,200). Campania, on the Gulf of Naples, by comparison, has a per-capita GDP of less than €17,000.

While the rest of Italy sinks into recession and unemployment deprives the younger generation of a future, the northern part of the country seems disconnected from the general malaise. An economic miracle seems to have unfolded in recent decades here, but where does it come from? How are Veneto's business owners able to be so successful in an economically discredited country like Italy, with its lethargic government officials, its sprawling bureaucracy and its constant strikes?

Some say that the region's prosperity is rooted in the history of the Republic of Venice, the most important trading power between East and West in the late Middle Ages. Others see its proximity to potent neighbors as the deciding factor: Austria and Germany in the north, Slovenia and Croatia to the east, and the Italian regions of Lombardy and Piedmont in the west.

Alessandro Vardanega, 47, president of the Treviso Industrial Association, believes that the interaction between history and geography has produced people with a unique mentality.

The Veneti are entrepreneurs through and through, Vardanega raves; disciplined, flexible and with an affinity for risk. The region, between the Alps and the Adriatic, was once dominated by agriculture and supplied Venice, but in the 1960s and 70s, young people in the area wanted a future beyond farming. Some emigrated, going to the United States, Australia and Germany. Others founded small companies, with their families forming the backbone of production.

Uncles and aunts, grandfathers and grandmothers, everyone pitched in, even working on Saturdays and Sundays. "It enabled the companies to keep costs down," explains Vardanega, who also runs a family business, a brick factory with 270 employees.

There are several unique features that characterize companies in the region. They are highly specialized, like Texa, for example, a high-tech company that develops automobile diagnostic equipment. Almost half of the employees hold doctorates. The companies tend to be clustered: The ski and outdoor shoe industry, for instance, is concentrated in Montebelluna, in the foothills of the Alps. The companies headquartered there control two-thirds of global production.

And they are also focused on foreign markets. The value of goods exported from Veneto exceeds Portugal's exports in the best of times. De'Longhi sells almost 90 percent of his espresso machines outside Italy. Germany is the biggest foreign market, with almost one in three espresso machines sold in the country having been manufactured by De'Longhi.

They are manufactured at the plant in Mignagola, a few kilometers from corporate headquarters, and the labor force of about 600 people works in two shifts. De'Longhi is opposed to introducing a night shift, because the additional wage costs would be too high. Instead, he has chosen to expand elsewhere, such as in the Romanian city of Cluj, where he bought a factory from Nokia.

The ailing mobile-phone maker had originally closed its plant in the western German city of Bochum and moved production to Romania, but then the Finnish company also shut down the plant in Cluj. "It was an attractive opportunity for us," says De'Longhi, noting that wage costs are at least 75 percent lower there.

Indeed, Romania is the destination of choice for many companies from Veneto. The plant in Cluj is helping to preserve jobs in Treviso, says De'Longhi -- an argument that could just as well have come from the chief executives of German companies like Bosch or Miele.

There are other surprising parallels between the successful businesses in Veneto and the small and mid-sized companies in Germany. In both cases, family businesses pursue a strategy of identifying and occupying niches in the global economy. The German economy is famous for its "hidden champions," world-class companies tucked away in the countryside, in areas like Swabia, located in southwestern Germany, or the area around Paderborn in northwestern Germany. In Italy, these hidden market leaders are concentrated in the northeast.

Treviso, about 25 kilometers (16 miles) northwest of Venice, is the hub. Townhouses magnificently adorned with frescoes testify to the town's dignified prosperity. Romantic canals traverse the historic center, and bartenders serve Prosecco from the region's vineyards in the city's arcades. Nevertheless, the city can seem very un-Italian at times. There are no honking horns or cursing drivers, everything is neat as a pin, and all of the parking spaces in the downtown area are numbered sequentially.

The cosmopolitanism of the business community is almost certainly not a product of the region's political leaders. The separatist -- and right wing -- Northern League has been an important force in the city for two decades, and party leaders like Luca Zaia and Giancarlo Gentilini are from the region.

Zaia, once an agriculture minister in the administration of former Prime Minister Silvio Berlusconi, attracted attention when he tried to convince Italians not to eat pineapple and to eat more Italian products instead. And Gentilini, the former mayor of Treviso, suggested sticking illegal immigrants into rabbit outfits, "to give hunters something to practice with."

Such a political atmosphere is hardly conducive to doing business, yet companies in the region have found success nonetheless. Indeed, they are accustomed to the government making their lives difficult. In a survey conducted by the German-Italian Chamber of Commerce in Milan, German companies with branches in Italy complained about the lack of political stability and the inefficiency of public officials.

No End in Sight

Attorney Paola Nardini, 52, is familiar with these problems. The conditions in government offices are "Byzantine," she says. Nardini's office is in the Villa Canossa, a 17th-century Venetian manor house near Treviso. Today, the palace serves as a branch office for the German-Italian Chamber of Commerce, of which Nardini is a member. Some 22 years ago, she relates, she represented a client in a civil case before the court in Venice. The case dragged through the courts, year-in and year-out, with no end in sight. The court recently set a date for the main trial: in 2015. "It's lucky that I'm still young," Nardini says sarcastically.

When it comes to the efficiency of its legal system, Italy ranks 133rd out of 142 countries. Even in Veneto, the wheels of justice don't turn any faster than in the rest of the country. The fact that the economy there is not seriously affected is mainly the result of Italy's decreasing importance as a market for its globally active family businesses. The Venetans invest primarily abroad, which is why they are relatively unaffected by the country's steady slide into crisis.

Coffee machine maker De'Longhi, for example, has now set his sights on the United States. Starbucks, he says, has familiarized Americans with decent coffee. "The US market will be ready for espresso in about 10 years," says De'Longhi.

In other words, the future too will provide plenty of opportunities for Veneto's hidden champions to succeed in the global marketplace. But couldn't the region's strategy serve as a model for all of Italy? Would it be possible to transfer the model to cities like Naples, Bari and Palermo?

Industry official Vardanega shakes his head. "Impossibile," he replies, saying that the mentality of people elsewhere is simply too different. For example, he notes, the differences in how people in various regions handle natural disasters are telling. At the end of May, several strong earthquakes shook the Emilia Romagna region, and tremors were also felt in Veneto. Locals rebuilt the destroyed buildings in a flash, says Vardanega.

The people in the south, on the other hand, react completely differently in such situations. "They wait for help," he says.