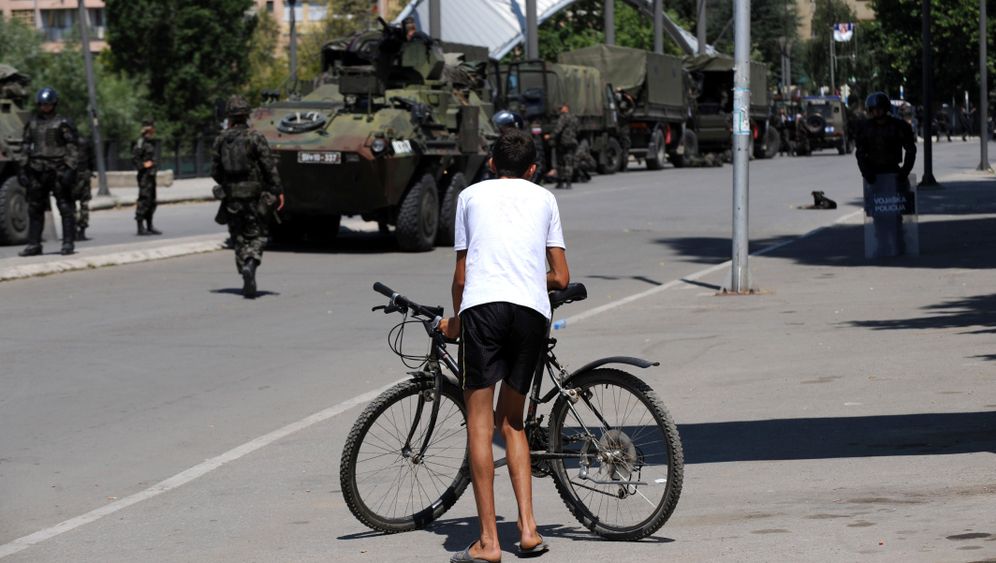 Violence on the border between Kosovo and Serbia continued to escalate on Wednesday as members of the Serbian minority in northern Kosovo set fire to a border post that has been in dispute since Monday. The attackers also reportedly fired shots at a nearby outpost run by the NATO-led Kosovo Force (KFOR).

The border station has been contested since the beginning of the week when Kosovo's special police seized two northern border crossings in attempt to enforce an import ban on Serbian goods. On Tuesday there was violence during which a Kosovar police officer was killed, reportedly with a gunshot to the head. KFOR troops subsequently secured the border, while members of the Serbian minority barricaded themselves behind street blockades.

But on Wednesday the Jarinje border crossing came under attack again. Eyewitnesses reported seeing dozens of masked men firebomb the station. The attackers were also said to be armed with axes, clubs and pipes. Customs and police officers fled the scene to the nearby KFOR station, and no one was injured in the incident, according to news agency AP.

KFOR officials, who said shots had been fired on them during the attack, have since taken control of the border crossing, with reinforcement troops arriving to prevent further violence in the region.

"It was confirmed that an act of arson was committed against that position... There have also been confirmed reports of shots fired at KFOR personnel in the vicinity," KFOR said in a statement.

NATO has been involved in the unstable region since 1999 when it stepped in to stop ethnic cleansing of Albanians by Serb forces.

The United Nations Security Council announced it would address the flare-up on Thursday in a closed meeting and the European Union sharply condemned the violence. "These latest developments are unacceptable," EU foreign policy chief Catherine Ashton said in a statement. "It is the responsibility of both Belgrade and Pristina to immediately defuse the tensions, and restore calm and security for everyone."

Pro-Europe Serbian President Boris Tadic also called for a swift end to the mayhem, describing the attackers as "hooligans." But bickering continued between the two governments. Kosovar Prime Minister Hashim Thaci accused the Serbian government of standing behind the incidents. "We will not withdraw, there will be no return under any circumstances and at any price," he said on Wednesday night, accusing Serbia of trying to take over northern Kosovo, something that "will never happen."

The background to the conflict is rooted in the Kosovar customs stamp, which Serbia does not recognize, effectively preventing the export of Kosovar goods to the neighboring country. In retaliation the Kosovar government implemented an import ban on Serbian goods about one week ago. The Kosovar special police were stationed at the northern border controls to enforce the import ban, but the hardline Serbian population there has resisted the measures.

Kosovo, home to a mainly Albanian ethnic majority, declared its independence from Serbia in 2008. But unlike more than 70 other nations, Serbia does not recognize Kosovo, and some 60,000 Serbs living in the north are still loyal to Belgrade. Officials there want to reincorporate Kosovo, and fear that accepting the Kosovar customs stamp would be tantamount to recognizing the country's independence.

But solving the conflict is among the conditions Serbia must meet before it can be considered as a candidate for entry to the European Union. Both Serbia and its former province Kosovo are taking part in negotiations moderated by the EU to mend their conflicts, but little progress has been made.