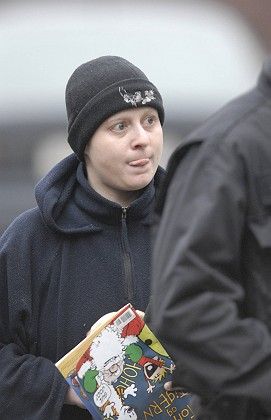 Barbora Skrlova in custody. She arrived in the Czech Republic on Wednesday.

The bizarre case of a Czech woman posing as a 13-year-old boy in Norway could shed light on a separate -- and notorious -- child-abuse case in the Czech Republic involving a religious cult and a mother who tortured her sons.

Barbora Skrlova, a 33-year-old woman on the run from Czech investigators, was arrested this week in Norway for pretending to be "Adam," a 13-year-old boy. Czech authorities sought her for questioning in another case, not as a suspect -- and it still isn't clear whether she's an accomplice or a victim.

Last fall she enrolled in an Oslo school as the bald, effeminate son of a Czech theater manager and dramaturg named Martin Fahrner -- who had also moved to Norway, though he had a wife and a real son in the Czech Republic named Adam. Skrlova attended classes for several months before fleeing to a Norwegian children's home, where "Adam" claimed to be the victim of child abuse. Then, on December 16, "Adam" disappeared from the home.

Norwegian officials searched for the boy and arrested Skrlova on January 5. DNA tests determined that "Adam" was in fact Skrlova, who had left the Czech Republic in the spring of 2007 to avoid questioning by investigators there in a nationally publicized case of child abuse. But it isn't clear whether she left on her own or under the influence of a religious sect linked to her father.

The child-abuse case is even stranger than Skrlova's flight to Norway. It turns out that "Adam" was not the first teenager Skrlova had pretended to be.

In the town of Kurim, in the Czech Republic, Skrlova was posing as the 12-year-old stepdaughter of a woman called Klara Mauerova, who is now in custody for child abuse. The Prague Daily Monitor reported that after a neighbor found one of Mauerova's sons, eight-year-old Ondrej, bound and naked in a closet of Mauerova's house, Mauerova herself was arrested on charges of abusing Ondrej, his brother, and a girl named "Anicka." Anicka was a supposed stepdaughter who had been in Mauerova's custody since March -- and turned out to be Sklorva.

Czech papers reported that Sklorva could face charges for passing herself off as an underage girl, but the police mainly want her as a witness. After Mauerova was arrested, Sklrova was taken to a children's home as "Anicka" and disappeared. She went to Denmark, then wound up in Norway.

Czech media also report that a splinter sect of the so-called Grail Movement, a cult founded in Germany in the 1940s, could be behind the Mauerova case -- and that the splinter sect is headed by Skrlova's father, Josef Skrla.

Officials still aren't sure whether Skrlova is a victim or an accomplice, but the suspicion for now is that members of the sect had coerced her into living as "Adam" in Norway -- and that she fled the school hoping to be exposed.

"Not even we have been able to figure out what is up and down in this case," said Norwegian police attorney Sven T. Roer, according to the Associated Press.

Martin Fahrner was first arrested in Norway on child-abuse charges but was subsequently released. Now he and Skrlova both face charges in Norway of providing false testimony.