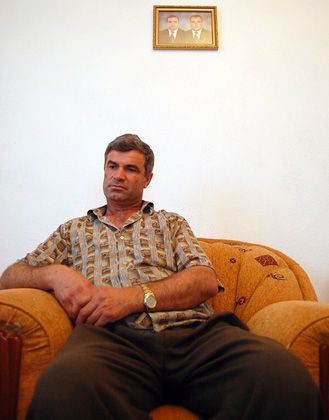 Mr. Puci, 52, and his family are afraid to leave their house due to an ongoing blood feud. On the wall is a picture of his two murdered brothers.

The small picture of two grim looking men in suits is the only adornment on the white wall of the family's living room.

The two were Mr. Puci's brothers -- and they were murdered four years ago. Revenge was taken, and as a result, Puci and his family, including the five children of his dead brothers, are unable to leave their two-storey home here in this bleak suburb just outside the Albanian capital, Tirana.

The children cannot go to school, says Puci, 52, a former construction worker who asked that his full name not be published. We will run out of money soon. Somebody needs to work, but if they go to work theyre going to be killed. The other family will be watching everything we do. Theyll wait for their chance.

'How Will This End?'

In 2004, a member of the neighboring Ferhati family stabbed the two Puci brothers to death in front of their wives and children as they worked in their nearby market. The motive was a minor property dispute, but police never caught the killer. So this past January the 75-year-old patriarch of the Pucis murdered a male and female member of the Ferhati family. He is in now in jail, but the Ferhatis have vowed to take revenge. The Pucis have not left their home in six months.

The centuries-old custom of gjakmarra, or blood feud, banned during four decades of communist rule, has plagued this Balkan country in recent years, locking away hundreds of families like the Pucis who say they cannot go out in public for fear of a bloody settling of scores. But only in the last 12 months has the government here, prone to downplay the issue, begun to tackle blood feuds head-on.

It is part of an effort to move Albania away from its tribal roots and position it to officially apply for European Union membership, potentially as early as this year. In early April, Albania was one of three countries extended an invitation to join the North Atlantic Treaty Organization, seen by the EU as an important prerequisite to accession. The EU has also promised to up aid to Albania -- Europe's second poorest country behind Moldova -- by €95 million by 2011.

Yet Albania remains a country very much attached to tribal traditions even as the government tries to prepare the country for a future in the EU. Tirana this year amended the countrys criminal code to make blood feuds illegal and punishable with up to three years in jail. It has also pledged nearly €65,000 during the last 12 months to promote reconciliation and help get teachers and textbooks to the more than 1,000 children in Albania who human right organizations say still cannot go to school because of blood feuds.

There seems to be progress: The Committee of Nationwide Reconciliation, an Albanian non-governmental organization receiving government support to broker peace between warring families, says blood feud killings are down 50 percent in 2008 and the number of feuds it reconciles could end up doubling this year.

But the country has a long way to go, and the government needs to budget even more money, says Gjin Marku, the committees director. There are still 1,600 families confined to their homes because of blood feuds, the committee and other human rights organizations estimate.

Thousands of people have lost their lives in Albanian blood feuds since 1992. These children stay home rather than risk death.

If a killer flees, his family members are left to pay the price, Marku says. They are innocent, but it is the family that is confined to the house. Its a very serious situation.

For some families, leaving Albania is the only option. Leigh Rieder of the US Embassy in Tirana says the Embassys consular section arranges for a small number of visas for Albanian families who manage to obtain refugee status from the International Organization of Migration.

Blood feuds are not a new phenomenon in Albania. The practice was originally sanctioned in a 15th century Albanian code of conduct, known as the kanun, established to bring law and order to the tribes in the north of the country. Enver Hoxhas 40-year dictatorship from 1944 to 1985 left little justification for such a code, since the state controlled everything.

But after Albanian communisms collapse in 1992 -- and amid the chaotic and corruption-ridden transition to democracy that followed -- the kanun began to reassert itself. In the last decade and a half, more than 5,000 people have lost their lives in blood feuds, according to World Vision, a Christian humanitarian organization that monitors Albania.

If you have the kanun structure today, it means the state is not working, says Agim Loci, 37, a volunteer for the reconciliation committee.

But even worse than the re-emergence of kanun, observers say that a new, bloodier form of the blood killing phenomenon has emerged. Traditionally, when a family member was killed, explains Ismet Elezi, a law professor at Tirana University, only the actual perpetrator could be targeted. Once the murder was avenged, the feud was settled.

Today, though, says Elezi, families seeking revenge often choose to target any member of the killers family, even children. The result is that entire households refuse to leave their homes, the only place where a murder cannot be avenged under kanun. 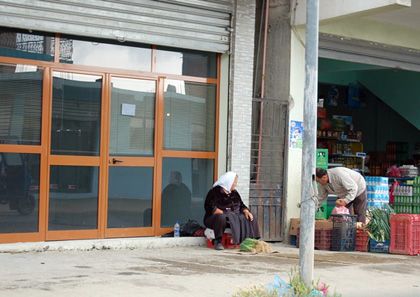 The Puci family's feud began over this small bit of space between two stores owned by the rival families.

Marku, the Committee of Nationwide Reconciliation head, worries that potential exists for thousands more cases of revenge killings. Many such feuds result from property disputes, something that Albania does not lack for. Albanian courts are currently dealing with some 130,000 such disputes, many of them a legacy of communist-era land seizures and subsequent restitutions. Marku says 30 percent of those wont be resolved to the satisfaction of the families involved, and members will take matters into their own hands.

Through a network involving dozens of volunteers countrywide, the reconciliation committee tracks disputes and generally adds 150 new feuds to its watch list every year. Increasingly, though, Albanian families are choosing reconciliation over further bloodshed. Whereas 50 settlements per year had been normal, volunteers this year have already brokered peace in over 60 cases.

Haziz Aruci, 56, is one of the family heads that has chosen forgiveness. Sitting in a second-floor bar in Fushe Kruje, a town 30 minutes outside Tirana, Aruci tells how his nephew was murdered last year in a nearby village.

The family of the murderer has since been in hiding, but Aruci says the murder will not be avenged. We believe this killing was an accident, Aruci says. It happened at night. We dont want to look too much into it. We want peace.

For the Puci family, though, peace is still a long way away. It's just 2 p.m. and the shades are drawn tight. A television plays loudly somewhere in the house, and in one bedroom a 10-year-old boy sleeps.

Puci and his wife sit in their living room, drinking coffee and homemade brandy as the Committee of Nationwide Reconciliation volunteer Loci, who is handling their case, tells them that the Ferhati family is not ready to reconcile. Too little time has passed since the January killing.

Pucis father killed a female member of the Ferhati family, something the kanun forbids, which is why the Ferhatis remain set on seeking revenge. The code in this part of the country also stipulates that families must wait a year before asking forgiveness. Kanun must be respected, Loci says.

My view is its not too soon, says Puci. For four years my brothers have been under the ground, and now [the Ferhatis] know how we felt for four years.

Still, Puci's family will have to remain like this, locked in their home, until next January when they will again ask the Ferhatis for forgiveness.

With killing, were not going to solve anything, Puci says. A lot of people have been killed. Please, no more killing. That is our request.