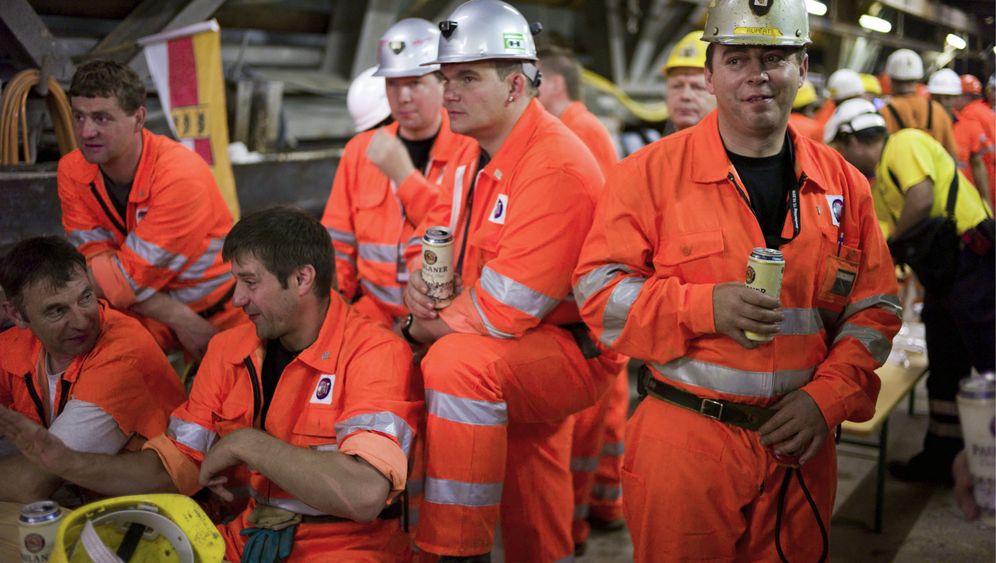 Switzerland's reputation has suffered in recent years. It's highly regarded banks proved not to be immune to the financial crisis. The country found itself in the center of several international tax evasion scandals. And last November, the Swiss banned the construction of minarets in a nationwide referendum.

On Friday, the Alpine country once again found itself in the spotlight -- but this time the attention was positive for a change. Shortly after 2 p.m., under the gaze of miners, VIPs and journalists, the gigantic tunnel drill Sissi broke through the final 1.5 meters of rock in the Gotthard Base Tunnel. At 57 kilometers long, the tunnel is now the longest in the world.

It is, said Swiss Transportation Minister Moritz Leuenberger, "Switzerland's world wonder, and the longest world wonder in the world."

The hyperbole is hardly misplaced. The new tunnel is an engineering masterpiece, passing deep below high Alpine peaks and through several challenging zones of brittle rock and unstable sand. Several of the massive, 3,000-ton drills that did the lion's share of the work periodically became stuck -- one of them for six months -- and a total of eight workers lost their lives.

Nevertheless, the drilling of the tunnel was completed ahead of schedule. Digging in the neighboring tunnel is expected to be finished early next year.

"This is the most wonderful moment in my 36 years of tunnel building," said a tearful Hubert Bär, project foreman, as he held aloft a statue of Saint Barbara, the patron saint of miners. Peter Fueglistaler, head of the Swiss Federal Office of Transport, called it "a day of joy for Switzerland," according to the Associated Press.

The Gotthard Base Tunnel is part of a network of Alpine transportation projects, including two further tunnels beneath the mountain range, that is designed to make transport between northern Europe and southern Europe quicker and easier. The network, known as NEAT, is being built to relieve Swiss roadways of the burdensome truck traffic that now clogs the country's passes. When the Gotthard rail tunnel is finished, it is hoped that just 650,000 trucks will pass through the Swiss Alps each year instead of the 1.3 million today.

In addition, the tunnel will make the trip between Zurich and Milan fully one hour faster, once high-speed trains begin ferrying passengers through the route.

Friday's breakthrough was many years in the making. Swiss voters approved the project in a series of referendums fully 20 years ago with digging on the Gotthard Base Tunnel beginning a decade ago. It has also been expensive. The Gotthard tunnel will ultimately cost €9.1 billion euros with the entire NEAT network gobbling up €17.9 billion, double original forecasts. Despite the importance of the project for the European transportation network, Swiss taxpayers are footing the vast majority of the bill.

Not Just a Tunnel

And they aren't likely to see much of a return on their investment. According to the Süddeutsche Zeitung, the most recent forecasts show NEAT losing between €10 billion and €24 billion by 2070. There are also doubts as to whether the tunnel system will have the desired effect on freight traffic. While trains will be able to pass through Switzerland relatively quickly, the lack of an adequate rail infrastructure in Italy means that truck traffic may ultimately be quicker despite the fancy new tunnels.

Tunnel workers in Switzerland, however, were in no mood to contemplate such realities after the last layer of rock gave way to the advancing drill. Aside from a minute of silence for the eight workers who have lost their lives on the project, Friday was a day for celebration.

"We haven't just built a tunnel," proclaimed Luzi Gruber, head of Implenia, the company responsible for the project. "We have made history."