The new British passport looks almost exactly like the old one. It's burgundy red and the front cover shows the English lion and the Scottish unicorn standing proudly on their hind legs next to the United Kingdom's coat of arms. It is emblazoned with the words "Honi soit qui mal y pense," in English: "Evil be to him who evil thinks."

Upon closer inspection, it becomes apparent that two other words are nowhere to be found: "European Union." The Interior Ministry has been leaving them out since March 30, the day Great Britain's glorious future outside the EU was originally supposed to begin. It was a first step in the country's return to its (new) old glory. Beginning at the end of this year, UK passports will shine again in the traditional colors of blue and gold.

That's the theory, at least. It's also possible that this announcement -- like so much else in the never-ending Brexit saga -- was somewhat premature.

There has been a new deadline for Brexit since Thursday. After a marathon meeting in Brussels, the UK and the 27 other EU members agreed that Oct. 31, 2019, would be the absolute last day of this dysfunctional marriage.

As is so often the case when important decisions are made in the EU capital, heads of government convened behind closed doors for hours, debating, with their sherpas running through the corridors every now and then, until finally, in the middle of the night, they could announce that a deal had been reached.

In reality, nothing has been solved. With their compromise on Thursday, the united Europeans and the United Kingdom entered a decisive "as if" phase: The EU will pretend as if October is their final offer; Theresa May will pretend as if she can still decide; in London, the government will pretend as if it is conducting promising negotiations with the opposition Labour Party; May's enemies within her own party will pretend as if they could depose their leader at any minute; and everyone is collectively pretending as if they have Brexit under control.

Meanwhile, everyone is fully aware that October -- barring some miracle -- is just another obstacle for the British to overcome. And that things will continue after that, perhaps until March 2020, perhaps until the end of 2020, perhaps even longer. Who knows? Brexit forever.

If the last days and weeks have made one thing clear, it is that more time only means more arguments. And the longer this goes on, the more serious the consequences will be -- not only for Theresa May, her party and her country, but for the entire European project.

On Thursday afternoon, Theresa May bravely returned to the British House of Commons, where she has been attacked so often and so mercilessly. Once again, she implored the MPs to reach a compromise, all the while ignoring calls for her resignation. It was a clear message that even now, she wasn't thinking about quitting. The fact that she had, only a month ago, loudly proclaimed that she "as prime minister" refused to postpone Brexit later than June 30 -- no worries. May has promised so much and delivered so little that it hardly matters anymore. Except maybe for those voters who think mainstream politicians are all liars anyway.

It's not clear how May plans to use her newly won time. No one dares hope that the talks that were kickstarted in early April with the equally disjointed Labour Party could actually lead to a viable compromise on Brexit. Labour's goal is new elections. So why should the party -- with the catastrophe averted for now -- support what Labour leader Jeremy Corbyn likes to refer to as a "Tory-Brexit?"

Should the negotiations with Labour fail, May wants to let parliament vote on alternative variants of Brexit again. Should any of the many options achieve majority approval, May has promised to respect the outcome. But despite her complete lack of credibility, even among party allies: Why should something that has already failed twice suddenly work on the third attempt? The agreement in Brussels has removed the only leverage that could have maybe forced a compromise: the pressure of time.

And so, the dreaded EU elections inch ever closer toward the island. If the Brits don't manage to come to some Brexit agreement with Brussels, they will be required to participate in the vote for a new European Parliament, for better or worse. There is much reason to believe such a vote would be a momentous reckoning for the ruling conservatives.

The think tank Open Europe just published a survey, according to which the Tories could only expect to receive around 23 percent of the vote. The big winners of the election would be the new "Brexit Party" of the firebrand populist Nigel Farage and the EU-friendly dissidents of "Change UK," which isn't even registered as a political party yet.

So far, neither group has a functioning apparatus, voter base nor sufficient number of candidates for the election. Even so, they have what it takes to bring the British political system to its knees. With unforeseeable consequences. It's hard to imagine a situation after such a historic debacle in which Theresa May could still cling to her office.

By that point at the very latest, it would be time for a new leader to try their hand at governing. And since the majority of Conservative Party members are staunchly critical of the EU, the dreams of some unpredictable politician like Boris Johnson could suddenly come true and they could find themselves in a position of power. No one has any doubts that Johnson, a former EU correspondent for the Daily Telegraph, would give his desire to destroy Brussels free rein -- with the goal of negotiating the hardest Brexit possible. Or, if push came to shove, to simply leave without an agreement. Only the British parliament in its current constellation could prevent Johnson or some other hardliner from taking this step -- another reason why another special parliamentary election could soon take place.

That's why the EU's decision on Thursday was such a big risk. No one can know how the UK will behave in the near or distant future. Once again, Theresa May made big promises: that her country intended to continue fulfilling its obligations as an EU member; that London would refrain from trying to influence personnel decisions just as it would stay out of negotiations over an EU budget for the years 2021 to 2027. But what are May's promises really worth anymore?

Hardline Brexiteer and Boris Johnson supporter Jacob Rees-Mogg even went so far as to say earlier this month that his country should be "as difficult as possible" with the EU. European diplomats should no longer harbor any illusions.

To be sure, the Brits' ability to sabotage the bloc will be limited in the coming weeks and months. Top jobs like the presidencies of the Council and the Commission don't have to be unanimously ratified and there are no major legislative projects in the pipeline for the time being. European Parliament will convene one more time in Strasbourg next week and then the European election campaign will begin.

'History Will Not Judge Us Kindly'

But should the UK send a passle of right-wing populists to Brussels, it would be even more difficult to find majorities in a new European Parliament. And what if British hardliners remain in parliament after October? Will they carry the discord they sowed in the House of Commons with them to Brussels and Strasbourg?

So far, the remaining 27 EU member states have managed surprisingly well to prevent the chaos in London from spreading to Brussels. Maintaining that quarantine will also be the goal in the coming months. On May 9, the EU plans to discuss future issues in the Romanian city of Sibiu. The way things look at the moment, it's unlikely they'll ask Theresa May to participate.

But cracks are already beginning to show in the EU facade. Before EU leaders reached a compromise on Thursday, France and Germany clashed. On the one side, German Chancellor Angela Merkel, with the backing of Ireland and the Netherlands, had wanted to grant the British a generous extension of their Brexit deadline until at least the end of the year. On the other side, French President Emmanuel Macron was unyielding. Along with Austria and Spain, he made the case for a postponement of a few months at the most -- and the Brits' behavior, he said, should be regularly reviewed and evaluated. "History will not judge us kindly if we allow the British to stand in the way of the EU and European integration," Macron said. The way he sees it, the prospect that other EU countries might follow the UK's lead is more dangerous than a hard Brexit without an agreement.

The new deadline of Oct. 31 was chosen arbitrarily -- it is almost exactly between the dates that Macron and Merkel would have chosen. In that sense, it was a classic Brussels compromise.

Merkel and the vast majority of other EU member states still believe that the prospect of having to stay in the EU for a long time will increase the chance of the British parliament agreeing to some Brexit deal after all. And more than a few people, including European Council President Donald Tusk, still secretly hope that the British will cancel Brexit altogether.

If the last 1,000-plus days have demonstrated anything, it's that in the era of Brexit, things always happen differently than expected. 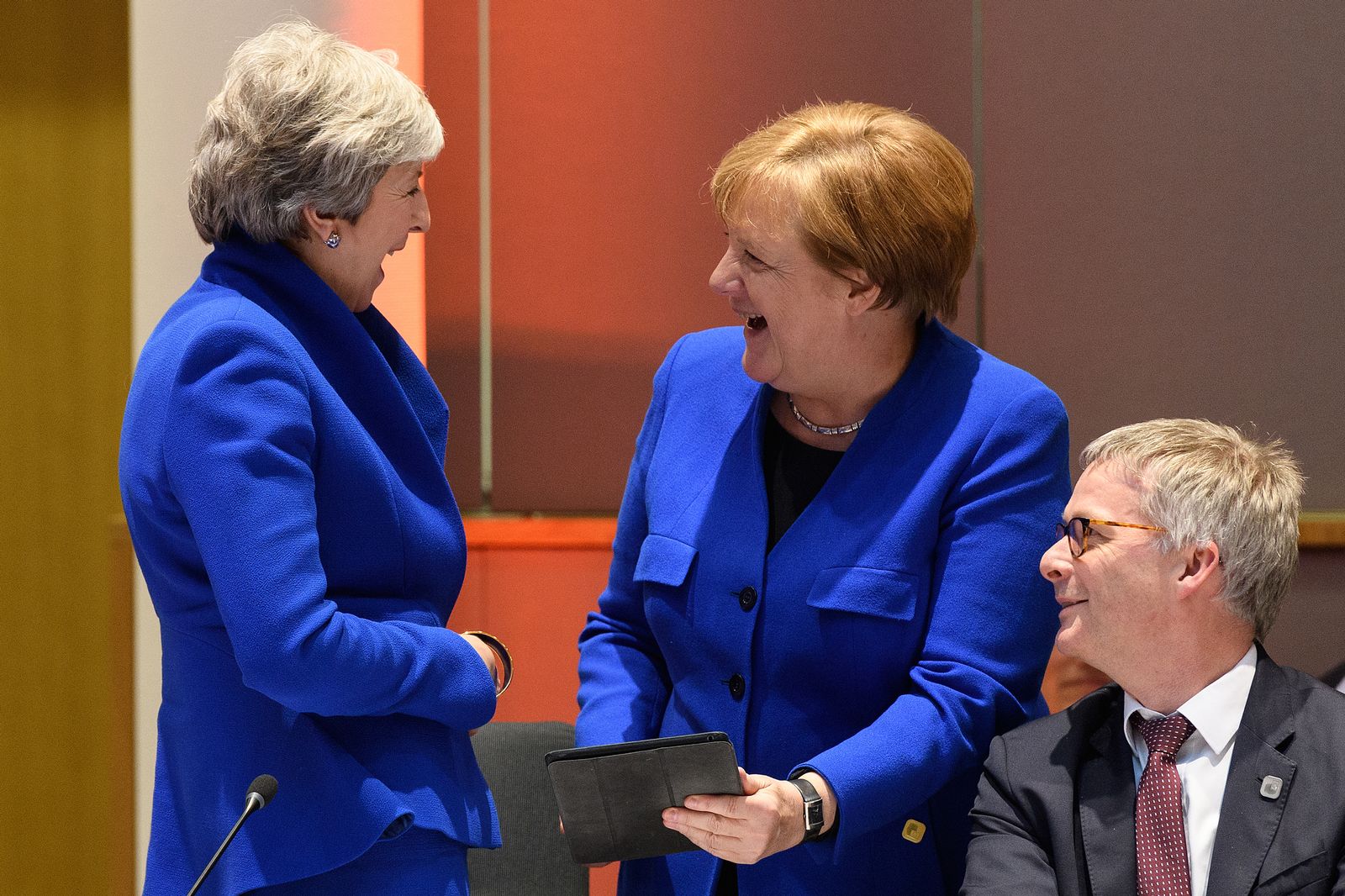