Zero hour is a term often used to describe the moments following war or revolution -- moments when the known world is no more and a new one is born. Conditions at such times are often catastrophic, but therein lies the opportunity for better times ahead. After World War II, the opportunity was taken advantage of, after World War I, it wasn't. Following the French Revolution, it took quite some time before a stable democracy developed, but after the American Revolution, it went quite quickly. It is easy to start a war, but it is difficult at zero hour to establish a promising peace. No continent knows that better than Europe.

Brexit is not a catastrophe on this level, far from it. But it does represent a zero hour for Europe. One can, at least, see it that way. And one should, because doing so would open our eyes to new possibilities and to the new opportunities now presented. It is infinitely discouraging that the majority of the British believe their country doesn't belong in the European Union. It is a misconception and a mistake. But it has now been made and we must all live with it. No means no. The eternal squabbles with the United Kingdom must now come to an end. Go with God. But go.

To take full advantage of a zero hour, it must be seen as a form of liberation. What has been true until now is no longer applicable. A revision is now possible. That doesn't mean that all of Europe has been called into question. Brexit has only disposed of a particular ideology. Thus far, it was thought that the European Union must continue to grow until it included as much of Europe as possible and that, were a country to withdraw from the union, it would represent complete failure. The common currency is perhaps the most manifest product of this ideology. And it wasn't wrong: Europe wanted to be big so it could keep up with the other centers of power in the world -- with China and the US. It wasn't wrong because strength comes out of unity and out of an impression of closeness. That impression, though, has long since faded and the British have now clearly shown that this unity doesn't exist.

The ideology of unity has failed. What now?

In many respects, unified Europe has been a success and Brexit does nothing to change that. The desire for unity developed out of the zero hour following World War II and is a clear rejection of war. It is a peace project, and a project that has been wildly successful. Members of the EU and its predecessors -- the European Coal and Steel Community, the European Economic Community and the European Community -- have never gone to war against each other, despite having constantly fought against one another in the preceding centuries: Germans against the French, the French against the British, the Austrians against the Italians. It is a success that made European federation worthwhile.

A Renaissance of Nationalism

The alliance also helped countries suffering under the yoke of authoritarianism, such as Spain and Portugal, to become democracies. The same holds true of the party dictatorships of the Warsaw Pact. Europe has increased and safeguarded prosperity in addition to making it easier to travel and to make purchases. For those who were open to the idea, Europe provided the pleasant sense of belonging to a family of peoples. The European Union is the best thing that could have happened to our continent.

Unfortunately, though, few see it that way anymore. In the perception of politicians and voters alike, the view of Brussels as a mega-bureaucracy intent on institutionalizing everything and patronizing everyone is playing an increasingly important role. Following the euphoric phase of Europeanization, we are now seeing a renaissance of nationalist thinking. People and politicians are looking out for themselves and their own gain first-and-foremost. That has led to the crumbling of solidarity. First, the Germans didn't seem particularly excited about helping the Greeks out of their financial troubles. And then Germans were left largely on their own in the refugee crisis.

Europe remains a vast island of prosperity and peace in the world. But one gets queasy when looking at the challenges now facing the continent.

France, the second strongest EU power behind Germany, is facing significant problems, including economic weakness, strikes and terrorism. The proud country is currently unable to take its rightful place alongside Germany as the motor of Europe.

Right-wing populism is on the advance in France, Austria, Germany and the Netherlands. It is movement born of nationalism and is thus skeptical of the EU, sometimes even hostile to it.

In Poland and Hungary, anti-democratic tendencies have come to the fore, with the press and judiciary under fire. Attacks against the freedom and independence of journalists and judges are the first steps toward an authoritarian state.

A Far Off Dream

In Romania, Bulgaria and Croatia, state structures are still too weak and the political classes are blighted by widespread corruption. Good governance is a far off dream.

Greece is not economically mature enough for the euro and can only be propped up in the common currency union by financial aid. The reform process has stalled. In countries like Italy and Spain, many are yearning for a return to a nationally controlled economy free of German pressure for austerity and reform.

The Continent is located in close proximity to the wars and crises currently gripping the Arab world, a situation that is producing millions of refugees and makes those nations unable to stop refugees coming from other parts of Africa further to the south. Because of the refugee crisis, Europe is also deeply ensnarled in a relationship with Turkey and its increasingly authoritarian leader, Recep Tayyip Erdogan.

That is what we are facing, and those are just the larger problems. There is a reason for each of them, but if you look at the picture as a whole, it is easy to get the impression that there is a lot here that doesn't fit together, that this continent is hopelessly discordant and that it has not yet established common political or economic standards. On top of that is the growing unwillingness to bow to a central government -- in Brussels, in Berlin -- and to accept to its standards.

The grand European vision aspires to a federalist state. It envisions countries giving up their sovereignty and statehood step by step, ultimately to be ruled by Brussels as the United States of Europe. That is a nice dream, but it hasn't been able to force its way into the real world. The British were never adherents of this dream. They wanted a loose alliance promising economic advantages. Now, they don't want anything from the EU anymore. Other countries could follow. There are many in the Netherlands who are also hoping for a referendum. Many in Germany share this skepticism but know full well that, as a country relying on exports, Germany profits handsomely from the EU. They should also be aware that the process of European unification helped Germany travel the road from international pariah to being a valued and well-liked country.

Germany needs Europe and that's why it should do all it can to preserve the EU. Brexit may be a terrible event because the UK is such an important country with deeply rooted liberal and democratic values. But one doesn't need to worry about what will happen to the country now that it has left the EU. It will remain a democracy and will remain part of the West. Russia will not be able to drag Britain over to its side. One can't be so sure about other countries in Europe. Were Greece to leave the euro zone, it would seek support elsewhere.

Still, the opening statement of this piece holds true: Zero hour can represent a moment of liberation. Following Brexit, that means the following: We have not been successful in keeping Europe unified, which makes it no longer necessary to maintain the fiction of unity no matter what. The world now knows that the European construct is a fragile one. It is undeniable. But something can be won from this realization.

It is now possible to take a sober look at where unity is necessary and where it is not. That means letting go of the ideology which holds that all EU member states must advance at the same pace. Europe still needs a large number of people to be taken seriously on the global stage. But there can be different levels of unity.

For Germany, France remains its most important partner. Now that Britain is leaving, that partnership is even more important. Europe can only work if the German-French axis is halfway intact. Currently, it is not -- because France has fallen behind economically and can no longer credibly claim to be on equal footing. Germany must now help France and show political and economic solidarity. Best would be a plan for an even tighter political and economic association, with financial and security policy being the priorities.

The other European partners should be invited to participate, but they should only be allowed to participate if they are able. That means, if they meet certain standards. This could be the beginning of a core Europe, made up of those who are both willing and able to pull their weight. The others, of course, can remain in the EU, but must make the effort to reform their institutions and economies. Those who aren't able will fall behind. And this time, standards are standards. Cheating and forbearance of the kind seen with the euro zone accession criteria will not be tolerated.

The euro will remain Europe's currency. The goal of keeping all euro-zone members in the common currency regime remains, but the principle of maintaining the euro zone's integrity at any price no longer applies. Those who are uninterested in reform, those who slide from one emergency aid package to the next, should no longer be stopped if they think they would be better off with their own currency. That is a bitter conclusion, but unity for the sake of unity has lost its value. Now, it is about facts and about getting along. That is of more value than the temptations offered by Russia.

This new Europe is also a utopia, a dream. It will be difficult enough to establish French-German unity and create a solid core out of which Europe can develop. But it is worthwhile to have a European dream and to work towards a specific goal. Brexit is not the end, it is the beginning -- a zero hour of which the continent must take advantage. 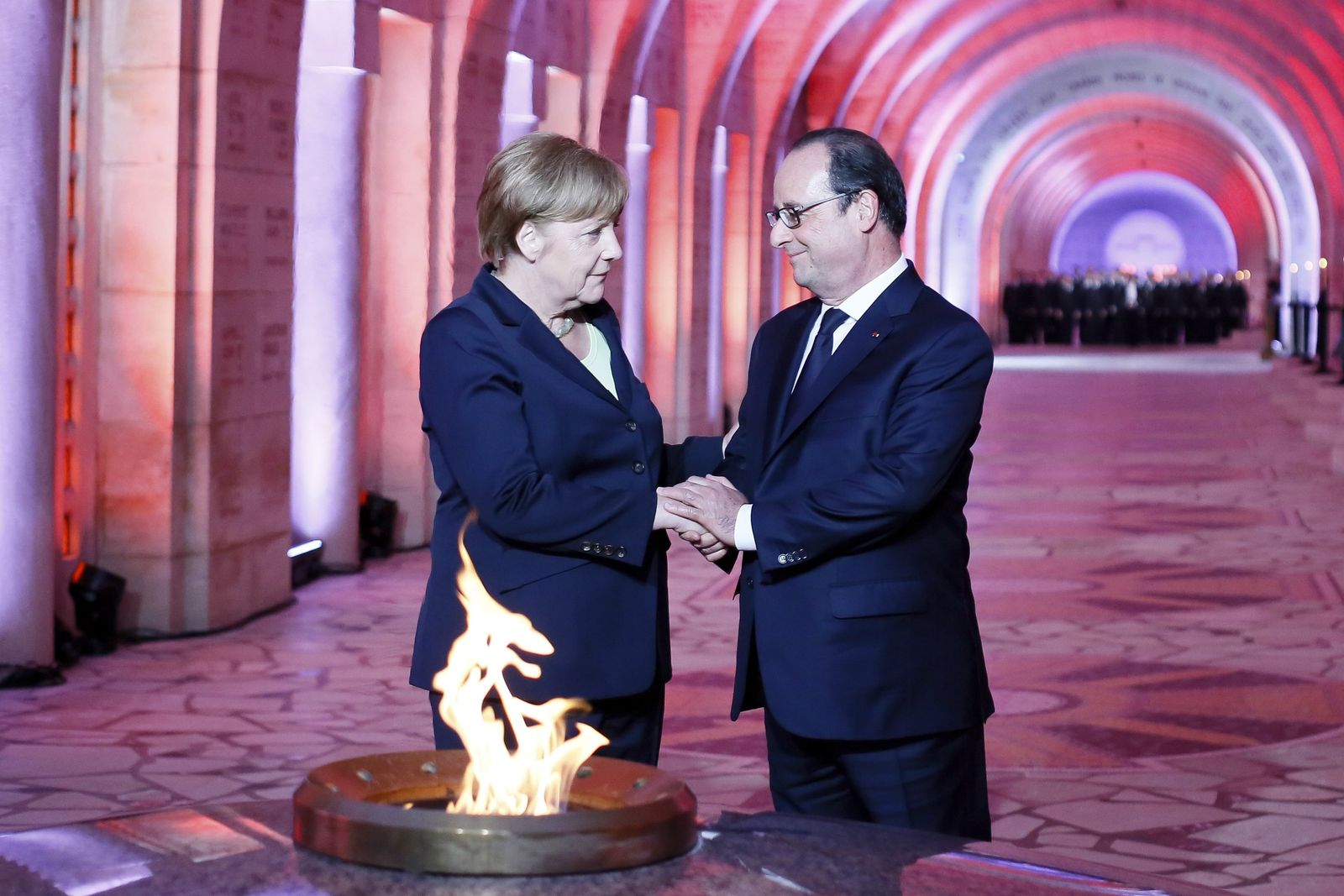 German Chancellor Angela Merkel and French President François Hollande during a ceremony to mark the centenary of the battle of Verdun.