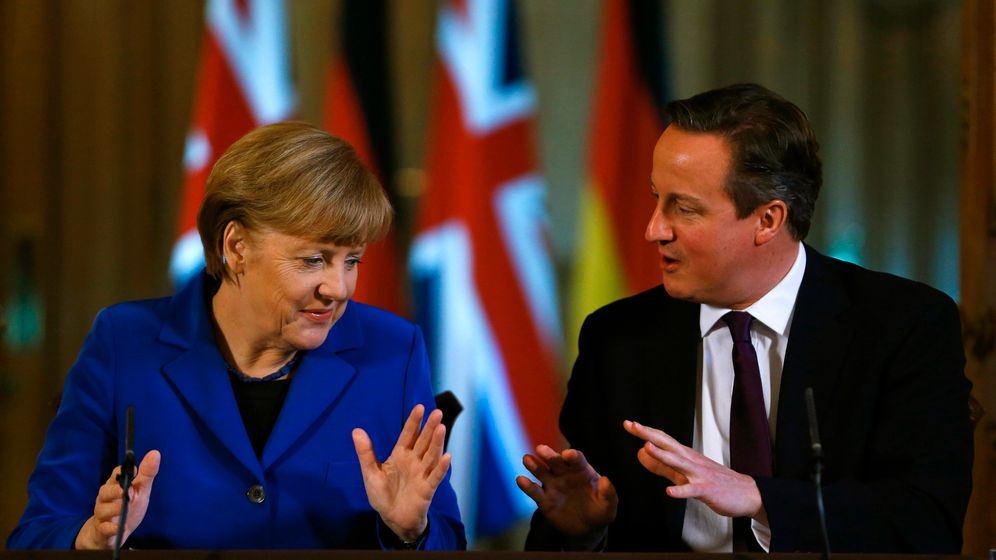 Most German words that find their way into the English language -- from "blitzkrieg" to "weltschmerz" -- tend to have negative connotations. With European elections looming, the latest term to be adopted by Brits is "spitzenkandidat," usually accompanied by raised eyebrows and an expression of unmistakable distaste. "We don't like the 'spitzenkandidat' at all," said an adviser to British Prime Minister David Cameron recently.

He was referring to the president of the EU Parliament, Martin Schulz, who was elected by the Party of European Socialists as its top candidate in Rome last week. The center-right European People's Party, meanwhile, is set to vote on its own "spitzenkandidat" for the May elections on Friday. Luxembourg's former prime minister, Jean-Claude Juncker, is widely believed to be the favorite, especially since he has the backing of German Chancellor Angela Merkel.

Both candidates are keen to see the European elections as a referendum on which of them gets to be the next President of the European Commission -- the executive branch of the European Union. According to the Lisbon Treaty, the European Parliament now gets to play a key role in deciding who gets the top post in Brussels.

The Procedure is 'Idiotic'

The UK is the leader of a group of EU countries with concerns about the politicization of the European Commission and even bigger, and growing, reservations about Schulz and Juncker, who are seen as too pro-integrationist not only by David Cameron but also by the Dutch and Swedish governments.

As Cameron's people point out, the appointment process for the Commission president rules out candidates who are sitting heads of government, which is why neither Polish Prime Minister Donald Tusk, nor his Irish counterpart Enda Kenny nor Finland's Jyrki Katainen will be running.

Sweden and Spain are as unhappy as Britain with the prospect of Juncker as EU Commission president, while French President Francois Hollande is also thought to be less than keen on him.

Resistance to Schulz is equally sizeable, with Hungary in particular joining Britain in its unease. In Europe's capitals, there is widespread discomfort about the German Social Democrat, because, as president of the European Parliament, he challenged the European Council and exploited EU treaties to bolster the rights of the parliament. Many don't want a Commission president who is that politically calculating.

A Need for Consensus

"Right now, the most likely outcome is that neither Schulz nor Juncker become Commission president," says one high-ranking EU diplomat. Theoretically, a candidate only needs to have the backing of a qualified majority of the 28 heads of state and government before he or she can be put forward, but in practical terms, it is politically untenable that a president would be appointed against the will of several countries.

Herman Van Rompuy, President of the European Council, agrees with Chancellor Angela Merkel that there needs to be a consensus on the appointment of Europe's top job.

They are both pinning their hopes on the fact that traditionally, the heads of government in the European Council don't let themselves be swayed by their own parties. Van Romuy and Merkel don't want to allow the European Parliament to be making decisions not only about the Commission president but also Van Rompuy's own successor. Were the Conservatives and the Social Democrats in the European Parliament to form a coalition and demand Schulz be given one of the posts and Juncker the other, this is exactly what would happen.

Along with Britain, Van Rompuy -- who leads negotiations with the European Parliament -- fears EU institutions will close ranks if the newly elected European parliament digs in its heels. The high-ranking diplomat believes this is a potentially explosive situation.

In Brussels, various compromises are currently being mulled. The Council could reject the nominations of Schulz and Juncker for the Commission president post. But since it cannot simply ignore candidates legitimized by a vote, the two men could be compensated with other coveted posts. Schulz could be appointed High Representative for Foreign and Security Policy, and Juncker could become president of the European Council.

Government heads would then, as always, get to decide on who gets to be top dog. Although he's not a top candidate, Ireland's conservative Prime Minister Enda Kenney would have a chance, as would his Danish counterpart, Social Democrat Helle Thorning-Schmidt.