"Our system is the worst of all, because it brings us to this - instead of the public sale of healthy horses, under supervised control and by registered butchers, we have the furtive sale of 'suspect flesh' in attics, in cellars, by the firstcomer, by smugglers, by prostitutes, by disreputable men with no profession." -- Isidore Geoffroy Saint-Hilaire, 1856.

Isidore Geoffroy Saint-Hilaire was the director of the Paris Natural History Museum and a member of the Société Protectrice des Animaux of France. He was one of a group of learned, mid-nineteenth-century gentlemen who proposed that France become an openly horse-eating nation for the first time since Pope Gregory III's ban on the pagan practice of hippophagy in 732 AD. The proposal was rational: as a result of the industrial revolution, there were vast numbers of working horses that required humane disposal, and vast numbers of urban laborers who could not afford red meat. Highly regulated bouchers chevalines, or "horse butchers" were the obvious solution: At the end of their labors horses would be rested, fed well and then killed, their healthy, iron-rich meat being sold to the public.

Could Saint-Hilaire have imagined that 157 years later, following the legalization of the sale of horse flesh in every European nation, and the introduction of reams of animal welfare legislation and bureaucracy, the Continent would be sideswiped by a new horsemeat scandal involving fraud on a massive scale, potentially unsafe meat and the abuse of the equines themselves?

Hominids hunted and ate the ancestors of the modern horse over 500,000 years ago, but it all got a lot more complicated 495,000 years later when the first Bronze-Age Kazakh threw a leg over the back of a wild horse. Equines span bureaucratic and cultural categories, being both livestock, working animal and pet. This leads to knotty problems in a modern, industrialized food chain.

The 2013 scandal that began as "Burger Gate" in Ireland has expanded to encompass an estimated 13 countries and 28 firms. Horse has been unwittingly served up as lasagna, bolognese sauce and even as "fresh beef" by school canteens, pub chains, prisons, hospitals and unsuspecting parents. Some speculate that the fraud may have been underway for years. The price of beef has nearly doubled in the last six years, while the price of horses have gone into freefall thanks to the recession. The consumption of horse in 2013 is as logical as Saint-Hilaire's proposal. It's just not legal -- at least not if it isn't labeled as horsemeat.

How did this happen? Burger Gate is the result of years of bureaucratic bungling, austerity cutbacks and their unintended yet inevitable consequences. Few horses are openly raised for meat -- the dinner plate comes as a second and often unexpected vocation after a life of sport or work. This means horsecare is not subject to the same strict regulations and documentation as cattle husbandry: Any movement of cows between farms must be documented, but not so with horses. The result is loopholes galore, ripe for exploitation by unscrupulous traders.

The trail of hoofprints leading to the Findus lasagna begins in 2007 in Romania. In an effort to cut the number of horse-related traffic accidents and appease the EU, Romania banned the use of donkey- and horse-drawn carts on main roads. The result: a sudden surplus of horses that were transformed from economic asset to resource drain. Some were abandoned and some were cashed in at auction by their owners, heading south for butchery so that they could have the distinction of becoming salami that was "Made in Italy".

Horses are physically ill adapted for long-distance transportation, having a high center of gravity (leading to falls) and being more prone to dehydration than their bovine fellow travelers. The campaign for meat horses to travel "on the hook and not on the hoof" is now over a century old, but although the European Parliament voted in late 2012 to introduce new welfare restrictions, the European Commission seems reluctant to change current laws. Romanian horses were among the most traveled in the most heinous conditions, but had a reprieve in 2010 when the EU stepped in to restrict their export because equine infectious anemia, or "Horse AIDS," was endemic in the country. They were killed at home instead.

The meat was purchased at €2 ($2.68) a kilo by a Cyprus-based firm called Draap Trading Ltd and sold to French food processors Spanghero and Comigel, who wittingly or unwittingly transformed it into frozen dinners labeled as containing beef. Draap, as several commentators have pointed out, is simply the Dutch word for horse, spelled in reverse. Neither Comigel nor Spanghero were deterred by the fact that Draap's director, Jan Fasen, was tried on charges of fraud in 2012 for passing off horse flesh from South America as beef from Germany and Holland.

From Spanghero and Comigel, the well-traveled equine DNA was trucked to the British and European supermarket system and on to a cash-strapped, thrifty public. This deception was not caught by authorities in the United Kingdom until the products had been on sale for months because French processing plants go uninspected by the British Food Standards Agency. In the name of saving money, the coalition government split the FSA's duties between other ministries, and left no inspections of processing plants. That is the job of the supermarkets themselves and also the trading standards departments of British local authorities. Once more, austerity plays handmaiden: Trading standards budgets have nosedived in recent years.

Meanwhile, in an irony that would have made Saint-Hilaire boggle, the scandal has introduced the British public to the country's own unsavory horsemeat industry, which has doubled its intake of animals since 2009. Horsemeat may not be in vogue to the point that it is featured by British supermarkets as a special offer of the week, but the business is growing. The industry has a dark side, too: Herds are often raised in poor conditions with no health checks or concern for their welfare before they are ultimately sold to the slaughterhouse. The campaigning charity Equine Market Watch says that every week horses are sold with minimal official supervision with open wounds, communicable diseases and other visible signs of neglect. From the markets they are either shipped overseas as "riding animals", thus circumventing regulations on their route to becoming a ready meal or handbag, or killed in the UK.

As Burger Gate exploded, ITV ran an undercover exposé revealing abuses at an abattoir that slaughtered horses, and then the owners of two British processors were arrested on suspicion of selling meat from horses that had been treated with the commonly used anti-inflammatory bute, which can cause blood disorders in humans. The FSA was forced to admit that it had lost track of the contraband meat on the Continent.

Return to a Nightmare Vision

The safeguards had failed. European horses are supposed to have passports that detail their drug history and prevent the wrong animals from entering the meat system, but the BBC has just reported that over 7,000 unauthorized horse passports have been in circulation in Britain since 2008. The National Equine Database that was meant to bring traceability to the horse industry was scrapped in autumn 2012 as a part of cost-cutting measures.

From "suspect flesh" to "furtive sale" and "disreputable men," our quest for cheap, nutritious and safely produced red meat for the working man has brought us back to Saint-Hilaire's nightmare vision. And the horses themselves? Like Boxer in "Animal Farm," they continue to get the raw deal for their special status. Spring is coming. The mares in the meat herds will foal soon, but this time there won't be a market for horse-beef burgers.

The UK's horse sanctuaries are already at capacity after four years of recession and horse abandonments. The low-end horses will pass from market to market or be dumped to fend for themselves. Meanwhile, a Brussels' district has a new, eco-friendly recycling collection scheme. Draft horses pull wagons for waste through the city streets. It's a spot of old-world charm, and helps preserve traditional working breeds that would otherwise have no use but as meat.

Susanna Forrest is the author of "If Wishes Were Horses: A Memoir of Equine Obsession" (Atlantic Books) and is currently working on a history of horses: The Age of the Horse. She also writes a blog. 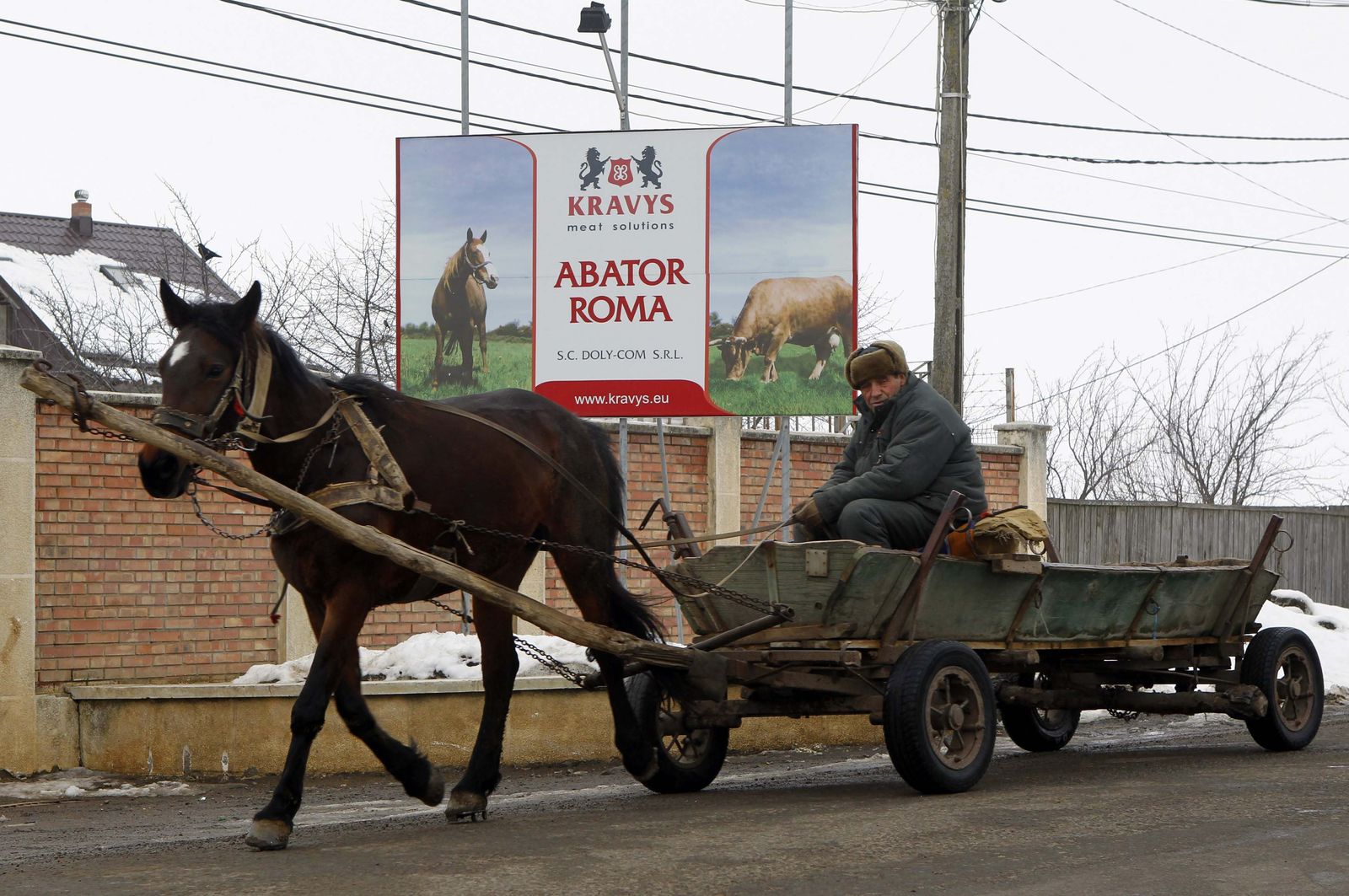 A man rides his horse-driven cart in front of the Doly-Com meat plant in Romania.