The irony was difficult to ignore. As world leaders gathered in Copenhagen in early December for what turned out to be a failed attempt to agree on a worldwide plan to combat global warming, temperatures outside the conference were bitterly cold. Delegates from equatorial countries were shivering under multiple layers, and even those from northern Europe had a hard time staying warm.

Now, almost three weeks after the conference ended in fiasco, Europe continues to be in the grips of frosty and snowy weather. And with a new low-pressure system -- rather incongruously dubbed "Daisy" -- set to move in over the weekend, much of Central Europe could soon be buried in a new layer of snow. 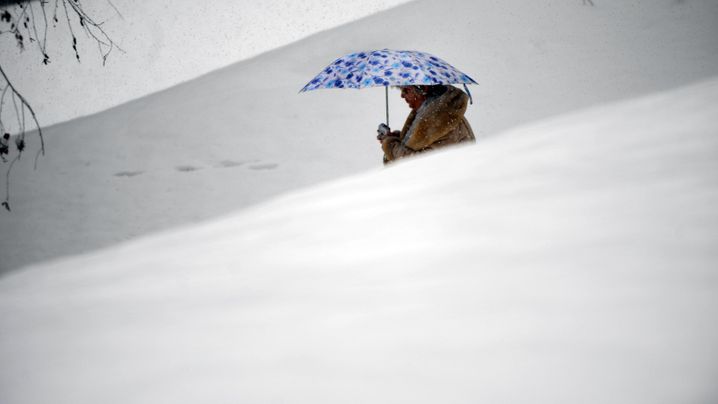 "On Friday, snow will fall across Germany," the German Weather Service said in a statement posted on its Web site. "Across the middle part of the country, the snow could be extensive and substantial."

The prolonged cold snap has already claimed scores of victims, and dozens of people -- many of them homeless -- have frozen to death in Poland amid temperatures as low as minus 25 degrees Celsius (minus 13 degrees Fahrenheit). Germany has also seen a number of weather-related deaths. For example, a wheelchair-bound man who had been missing since Christmas was found Monday near Duisburg frozen to death in the snow.

Preliminary figures suggest that the UK is also suffering through one of its coldest winters in years, having experienced its most frigid December since 1995. The chill is expected to continue at least through this week, with further heavy snowfall expected.

The Continent is likewise bracing for more bad weather. Temperatures could plunge below minus 20 degrees Celsius (minus 4 degrees Fahrenheit) in parts of Germany, and up to 20 centimeters (8 inches) of snowfall is expected. In Poland, there are heightened concerns about flooding, as water levels of the Vistula River, the country's largest, have risen rapidly as it has become clogged with ice.

Still, while there may be those tempted to see the cold snap as proof that global warming isn't all it's cracked up to be, scientists say that most of the northern hemisphere is actually much warmer than usual. Large swaths of northern Canada and Alaska are a balmy minus 30 degrees Celsius (minus 22 degrees Fahrenheit) instead of normal temperatures, which are between 5 degrees and 10 degrees cooler than that.

In Europe, however, temperatures are roughly 5 degrees Celsius colder than usual, according to the UK's weather authority, the Met Office.