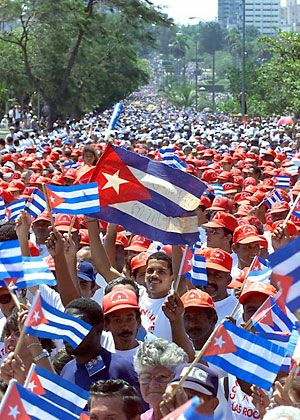 Hundreds of thousands of Cubans march during May Day celebrations: The leading Social Democrat in the European Parliament has said he will push the EU to lift sanctions against Cuba if the country agrees to allow Germany to open a non-government organization in Havana.

The fifth floor of the Revolutionary Palace in Havana is an unobtrusive sort of place, where the only sounds are those of muffled voices, the rare ringing of a telephone and the occasional rattling of a tea cart. It's the ideal place for a delicate mission.

It is Monday, Feb. 4, and Martin Schulz, the German head of the center-left Social Democrat faction in the European Parliament, has come to Havana in an effort to improve relations between Europe and Cuba.

To that end, he is sitting in front of Carlos Lage, a balding, deeply tanned man. Lage, 56, is the executive secretary of the Council of Ministers and one of the key members of the Cuban government. Photos of Fidel Castro, and revolutionary leader Ernesto Che Guevara hang in the reception area outside his office. Che is long dead and Fidel is seriously ill. Those who follow the country closely believe that Lage will soon be a more important man than he already is.

Schulz, 52, is here to explore whether the European Union can set aside its protracted diplomatic conflict with the Caribbean dictatorship. The meeting with Lage is the high point of his four-day visit, but it starts off on a sour note.

Cuba to Europe: You're America's Lackeys

Despite the fact that the European Union's sanctions against Cuba are currently suspended, Lage complains that the fact they exist in the first place is an outrage. He tells Schulz that Cuba is not prepared to offer anything in exchange for the permanent removal of the sanctions. The Europeans, he says, are nothing but America's lackeys.

It takes Schulz a few minutes to recover from the attack, but then he shoots back: "Let me tell you how your country is viewed in Europe. You impose the death penalty. You torture and lock up political prisoners. Cuba is a dictatorship." The meeting doesn't appear to be heading in the direction of mutual understanding.

The two men spend the next hour and a half arguing. "It was a killer meeting," Schulz says on the steps of the palace after emerging from Lage's office. "We gave each other a run for our money."

Nevertheless, the verbal sparring could mark a milestone. Schulz proposed to the Cuban government that if the communists offered a sign of their willingness to open up, the EU would slacken its rigid position.

It is an attempt that goes beyond Cuba. At issue is the question of whether a policy of mutual understanding can convince dictatorships to make concessions. Views on this question vary widely within Germany's grand coalition government of left-leaning Social Democrats and conservative Christian Democrats, between the Chancellery and the Foreign Ministry. The debate over how Germany should deal with authoritarian countries began when Chancellor Angela Merkel, a Christian Democrat, received the Dalai Lama last September -- a move that deeply outraged China's communist leaders. Foreign Minister Frank-Walter Steinmeier, a Social Democrat, called Merkel's move "shop-window politics." Berlin's approach to other authoritarian countries, like Syria and Iran, is also controversial.

In 2003, the EU imposed a series of symbolic sanctions on the Castro regime. They included a freeze on high-level diplomatic contacts between Brussels and Cuba, although the restrictions have since been eased to allow some lower-level contacts. To the great annoyance of the Cuban "Maximo Lider," members of the opposition movement -- a thorn in Castro's side -- were even invited to embassy receptions.

Schulz, a Social Democrat, is trying to reach a mutual understanding with Cuba by offering the regime a concrete deal. He has told the Cubans that he will attempt to convince a majority in the European Parliament to vote in favor of lifting the sanctions, and that, if he succeeds, the resulting pressure will likely persuade the 27 EU member governments on the European Council to come around on the issue.

What Schulz expects in return is no small matter. He wants the Cubans to allow the Friedrich Ebert Foundation (FEF), which is aligned with Germany's Social Democratic Party (SPD), to open an independent office in Havana -- with unfettered access to the population, an unmonitored foreign currency account, its own car and freedom of movement for its employees.

Cuba is a police state not unlike the former East Germany. Members of the EU delegation are constantly accompanied by watchful officials. Insiders report that the intelligence service systematically infiltrates the country's few opposition groups.

In addition, reformers and hardliners are currently waging a behind-the-scenes battle over Castro's legacy. The country's top leadership is expected to decide who will eventually succeed Castro as the head of government by Feb. 24.

Given all this uncertainty, reformers like Lage are being careful not to make any mistakes. In his conversation with Schulz, he claims that the Spanish Cultural Center, which Castro ordered closed in 2003, was "funded by the CIA."

The Ebert Foundation is not just any organization, Schulz argues. It is associated with the name of former German Chancellor Willy Brandt, who campaigned for a policy of détente worldwide.

"The Ebert Foundation even has an office in Beijing, just not in Havana," Schulz says. But Lage doesn't give in. "I cannot make this decision here and now," he says, at first. But then he accompanies Schulz to the elevator, past the photos of Che and Fidel. He waits until the two men are out of earshot of the Cuban delegation, and then he takes his guest aside and quietly tells him that he is interested, after all. He hands Schulz his telephone number.

Has the experiment succeeded? "If a woman gives you her phone number, it means that she wants things to move forward," says a member of Schulz's team. "The answer was encoded," says Schulz, "but the man was clearly open to the idea."