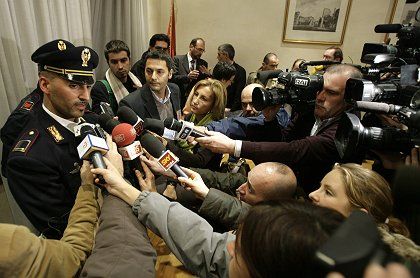 An Italian police officer answers journalists questions after a Romanian was arrested for allegedly raping and beating a 47-year old woman, who died on Thursday night.

The Italian government is to bring in sweeping new measures to curb violent crime by immigrants after a vicious attack on the wife of a naval commander. The woman, who died on Thursday, had been attacked on Tuesday night as she walked home from shopping, allegedly by a Roma man from Romania.

It was the latest in a spate of attacks blamed on foreigners that has prompted the government to give the authorities the power to summarily expel European Union immigrants deemed dangerous.

Italy's President Giorgio Napolitano signed a decree Thursday allowing the expulsions of EU citizens "for reasons of public safety," to fight "episodes of heavy violence and ferocious crime." The decree had been approved by a special meeting of Prime Minister Romano Prodi's cabinet on Wednesday night in response to the public outrage over the attack on Giovanna Reggiani. The 47-year-old died on Thursday after she was taken off a life-support machine. She had been found in a coma after being raped, beaten and dragged into a ditch. "Horror in Rome," was the headline on Thursday's Il Messaggero, one of the city's daily newspapers, which called for an "end to tolerance."

Italian officials have long urged Bucharest to help them counter the influx of Romanians, who now make up Italy's biggest foreign immigrant community. But Romania's Interior Minister Cristian David urged Italy not to adopt policies based on isolated cases. "We're also pained by what happened but we also think these are isolated, exceptional cases that damage the image of our country and our citizens," he told Italian television station RAI.

The suspect in the fatal attack on Reggiani was identified as 24-year-old Nicolae Mailat, who had been living in a Roma shantytown on the outskirts of Rome after fleeing a three-year prison sentence for theft in Romania. A series of violent crimes in the capital have been blamed on Romanians in recent months: the Oscar-winning director Giuseppe Tornatore was punched in the face by muggers and a cyclist died a few weeks after a violent attack by three Romanians left him in a coma.

According to Rome's Mayor Walter Veltroni, "In the first seven months of the year, Romanians made up 75 percent of those who raped, stole and killed. We clearly have a specific problem." The attacks have shocked the city, where street violence has long been unusual. According to the Italian news agency ANSA, Romanians committed 76 murders across Italy between January 2006 and June 2007 and were also responsible for half of the recorded rapes in the country for that period. They also topped the statistics for people trafficking and forced prostitution.

The issue of crime has further undermined the waning popularity of Prodi's center-left government, with the right-wing opposition accusing the government of being lax on immigration and ignoring the issue of rising crime in the capital. The right-wing National Alliance welcomed Thursday's expulsion decree but said it doesnt go far enough -- it wants to see jobless EU citizens expelled too.

On Thursday night the crackdown had already begun, with police arresting 17 Roma people for not having ID papers during raids on settlements along the banks of the River Tiber.