The German central bank, the Bundesbank, predicts that Greece will get a new rescue package shortly after the German general election on September 22. According to an internal report by the Bundesbank obtained by SPIEGEL, Europe will "most likely agree to a new credit program with Greece" by early 2014 at the latest.

In the report, compiled for the German Finance Ministry and the International Monetary Fund (IMF), the Bundesbank is critical of the latest loan tranche payout and of the analysis conducted prior to the payment by the troika consisting of the European Commission, the European Central Bank and the IMF.

The Bundesbank said the tranche was likely to have been paid as a result of "political pressures." The bank denies this is a reference to the German government, which has been at pains to stifle public debate during the election campaign about a possible Greek debt cut.

But in its report, the Bundesbank sounds very cool about this progress. It says the risks entailed in the rescue program remain "exceptionally high." The performance of the Greek government, it adds, is "hardly satisfactory," and there are "major doubts" about Greece's ability to implement essential reforms.

In July, Greece's international lenders approved the payment of €5.7 billion ($7.6 billion), the latest tranche of its bailout money. In total, Greece has so far received more than €200 billion in financial assistance.

For most ordinary Greeks, the prospect of new bailout loans from Europe is as disconcerting as it is for Merkel's election campaign. Most Greeks are convinced a haircut on government debt is both inevitable and welcome, but they are worried by what it might entail. "New loans or a debt haircut will simply mean new measures, new austerity and new hardships for the people. We have learned that lesson all too well by now," says Ioanna Polyzou, a 23-year-old university graduate who is unemployed -- like more than 60 percent of young Greeks.

SPIEGEL's story featured prominently in Greek newspapers on Monday. "The Bundesbank demolishes Greece's carefully painted picture of success and anticipates a new bailout agreement," center-left daily Efimerida ton Syntakton wrote. Center-right Eleftheros Typos commented on its front page: "The German central bank is ruining the election 'party' of Merkel, who refuses to even talk about the prospect (of new loans to Greece)."

A senior source at the Greek Finance Ministry, however, told SPIEGEL ONLINE that Athens' position remains clear: the top priority is to achieve a primary budget surplus by the end of this year. After that milestone has been achieved, all options concerning the viability of Greece's debt will be back on the table. The official refused to use the term "haircut," which is nevertheless on the lips of every Greek politician in private conversations.

The government of Prime Minister Antonis Samaras is waiting for important developments on that front after the German election. The Sunday edition of Kathimerini reported that Samaras has instructed ministers to present Greece's "red lines" in upcoming negotiations with the troika, expected to begin in early September.

Athens insists there is no room for further austerity, and people close to Samaras say he has found an important ally in his quest: US President Barack Obama. Following last Thursday's meeting with Samaras at the White House, Obama said: "Austerity cannot be the only answer to the crisis." The Greek government has been presenting this view as a clear sign that Washington will weigh in to push for a more growth-friendly strategy for Greece. 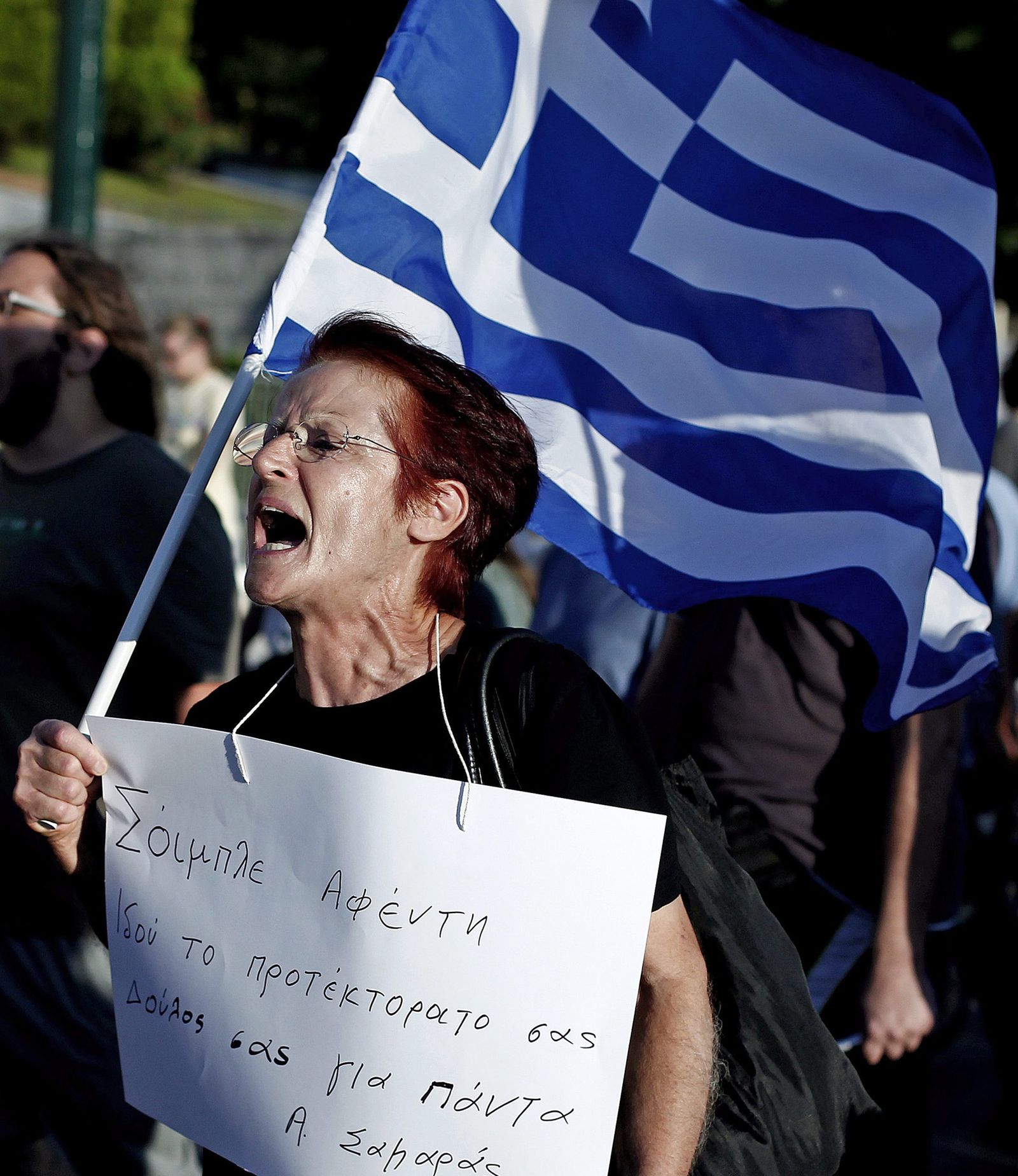 A Greek woman demonstrating in Athens in July during a a visit by German Finance Minister Wolfgang Schäuble.