France initially reacted with shock and anger to former Budget Minister Jerome Cahuzac's online "confession" on Tuesday to having illegal accounts in foreign banks. These emotions were quickly replaced with disenchantment, acrimony and frustration. And now the case of the plastic surgeon-turned-politician has triggered a crisis for the 10-month-old government of Socialist President François Hollande. Indeed, Cahuzac's defiant four-month lying campaign, the reaction to the accusations and its surprising denouement -- all of which has happened in a Fifth Republic that has not exactly been wanting for scandals, intrigues and affairs -- will confront France's political culture with a decisive test.

What did government officials know? When did it dawn on Hollande that he had been duped by his budget minister, who stepped down in mid-March? And how could the president, equipped with his almost monarchical power, rely on the solemn word of his fellow Socialist during a one-on-one talk in the Elysée Palace? During his election campaign, Hollande pledged to usher in an "irreproachable republic." But now, in addition to being outmatched by the ongoing economic crisis, he is also being found morally culpable.

Cahuzac's fiscal sins and his "expulsion from the tax paradise" (in the words of the communist daily L'Humanité) are not merely the faltering of an individual. Rather, his misstep exposes an entire system in which Cahuzac not only enjoyed the presumption of innocence, but was also able to shield himself from suspicion thanks to his ministerial post. The principles of the Republic are shaken, warns French political scientist Stéphane Rozès, when laws don't apply to those who make them.

As budget minister, Cahuzac was tasked with cleaning up France's state finances. The former plastic surgeon was supposed to use his scalpel to make precise cuts to pensions as well as health and social expenditures. In the meantime, however, he clandestinely multiplied his own capital income. For two decades, the self-proclaimed spearhead in the fight against tax evasion dodged taxes by having his money in undeclared accounts in Switzerland and Singapore.

And now a completely fresh accusation against a high-ranking politician is coming fast on the heels of the latest scandal: The Süddeutsche Zeitung, a leading German daily, has reported that Jean-Jacques Augier, Hollande's campaign manager, has two shell companies on the Cayman Islands. The report notes that Augier denies that there is anything illegal about this, quoting him as saying that he has "neither an account on the Caymans nor (has he) directly invested there."

The revelation comes as part of thereport on Thursday on the scandal over secret transactions in tax havens. An anonymous source leaked detailed records on the transactions to an international network of journalists. The data reportedly involves 2.5 million documents relating to 130,000 individuals -- including hundreds of Germans -- in more than 170 countries.

Worse than the illicit money-laundering is the complete loss of confidence: Cahuzac openly lied to Hollande's government and the entire National Assembly only to turn around -- with a healthy dollop of chutzpah -- to ask for a "pardon" from the French once he was ultimately threatened with exposure. In the eyes of his countrymen and -women, Cahuzac's actions have now unmasked him as one of those rapacious politicians who are aptly labelled in the popular vernacular as "completely rotten."

In the eyes of many in France, this group includes the members of an elite that, despite all the public rivalries between opposition and ruling parties, is joined into a secret conspiracy to pursue its members' own private interests. Widespread public suspicion focuses on the caste of high-level public servants, politicians and company executives who are often alumni of the same elite universities. This upper crust of the upper class is seen as continuously and incestuously striving to perpetuate their control over the country.

Of course, the public has long been resigned to the fact that, as former Prime Minister Michel Rocard once said, lies are a necessary part of politics. Campaign promises are not to be taken on face value, and announcements, proposals and reform projects often turn out to be nothing more than mere words on campaign flyers and party platforms. Likewise, when new governments start performing their everyday tasks, grand visions also shrink to normal size.

However, in the case of Cahuzac, a politician has been found guilty of brutal dishonesty -- and triggered a political disaster. This is particularly true for Hollande. It is still a mystery why his government didn't more thoroughly look into the accusations of Mediapart, the online investigative journalism website that first reported on Cahuzac's secret Swiss bank account in December. Indeed, it only took investigating prosecutors less than three weeks to confront Cahuzac with proof that prompted him to plea that he had been "trapped in a spiral of lies," in what the Belgian daily De Standaard has dubbed France's "Lance Armstrong moment."

But, given that, why did Hollande rely on his gut rather than on all the police, intelligence and diplomatic resources at his disposal as president? Likewise, did the French Ministry of Economics, Finances and Industry protect Cahuzac when it asked its Swiss counterparts to only look at UBS, the Swiss banking giant, to see if the minister had an account there and didn't ask about more banks when it was told no?

Apart from the issue of individual responsibility, Cahuzac's downfall might widen the gulf between average French citizens and the ruling establishment. The deterioration of faith in the work of public institutions, which will now only become more pervasive, benefits leaders of parties on both the extreme right and left. The conservative opposition is calling for a cabinet reshuffle, and Marine Le Pen, head of the far-right National Front, is demanding fresh elections.

President Hollande has reacted angrily to the scandal. During a TV appearance on Wednesday, he called it "unpardonable" and "an outrage," but he also tried to deflect criticism from his government by labelling it "the failure of one man." Likewise, he announced a package of anti-corruption reforms that would ban convicted tax-dodgers from holding public office and require all government ministers and parliamentarians to publish details about their personal finances.

But, given the profundity of this crisis in confidence, such moves seem rather ramshackle and feeble. French citizens already passed verdict on his government long ago. A survey by the Ipsos polling firm found that 62 percent of them consider "the majority of their politicians to be corrupt." And that was in January, long before Cahuzac's lying was exposed.

Meanwhile, French authorities have now filed preliminary money-laundering charges against Cahuzac. If convicted, the Associated Press reports that he could face up to five years in prison and a €375,000 ($480,000) fine. 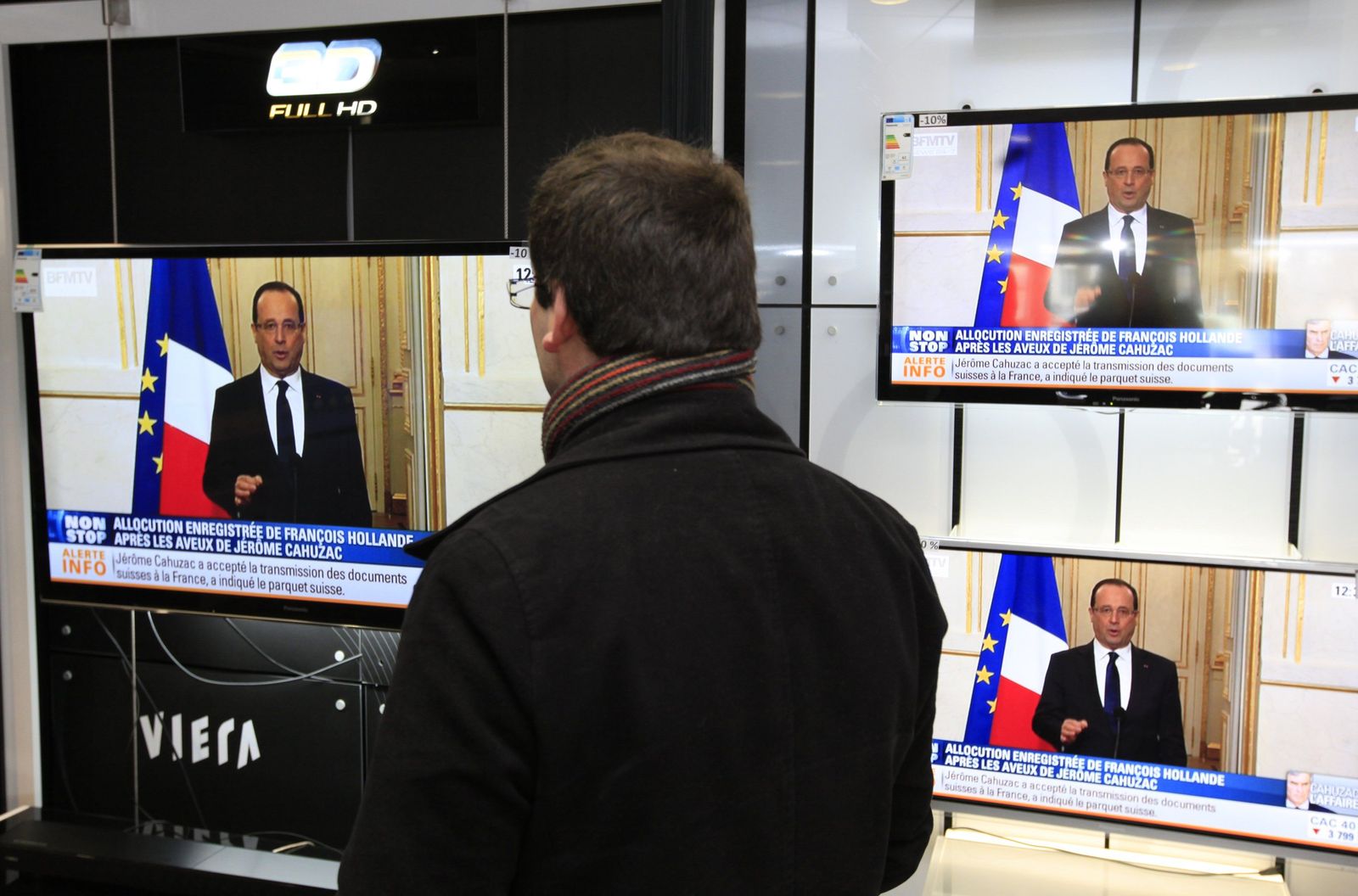