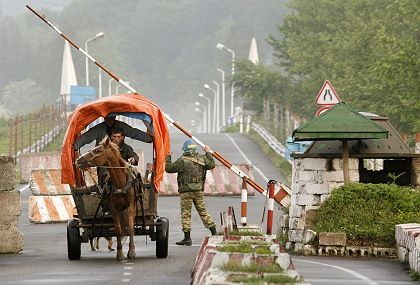 A checkpoint between Russia and Georgia's breakaway region of Abkhazia.

Germany is hoping to mediate a diplomatic solution to the conflict over the breakaway Georgian province of Abkhazia in the hope of preventing tensions there from escalating into a military conflict between Russia and Georgia.

The diplomatic maneuvers come as tensions in Abkhazia threaten to spiral out of control. On Monday security officials in the province announced that a series of explosions on Sunday night along the de-facto border between Georgia and Abkhazia had killed four people, including a United Nations translator, and left another five injured.

The incident was the fifth bombing in a week in or near Abkhazia. Moscow and Tbilisi have been accusing each other of being responsible for the incidents, as both Russia and Georgia vie for control of the province. On Saturday Russian President Dmitry Medvedev urged his Georgian counterpart, Mikheil Saakashvili, to refrain from "stoking tensions," in the region. The fact that Moscow is deeply opposed to Georgia's ambitions for joining NATO have only exacerbated the bad feeling between the two countries.

Berlin is attempting to prevent the situation from deteriorating even further. To that end, German Foreign Minister Frank-Walter Steinmeier presented his three-stage plan to a United Nations group of experts on Abkhazia in the Foreign Ministry in Berlin last week.

Phase one of the German plan envisages a year of trust-building measures. These would include declarations renouncing violence and the return of around 250,000 refugees to the province. The second phase would see the beginning of reconstruction work, with Berlin organizing a donors' conference to drum up the necessary funds. The third and crucial phase would involve finding a political solution to the conflict, essentially whether Abkhazia should become reintegrated into Georgia or be granted independence.

Steinmeier's plan has met with the approval of his US and Russian counterparts, Condoleezza Rice and Sergey Lavrov, as well as President Saakashwili, who visited Berlin at the end of June.

German diplomats fear that the tensions in the province could provoke a military conflict between Russia and Georgia if no agreement is reached soon.

Abkhazia broke away from Georgia during a war in the early 1990s. Its separatist government is not recognized by the international community, but it does have Moscow's backing. Most of Abkhazia's residents have been granted Russian citizenship, and in recent months Moscow has beefed up its peacekeeping force in the province.

Presenting his plan in Berlin, Steinmeier pleaded with the parties involved not to "play around" with the negotiations. "We stand at a critical crossroads," he warned.

Meanwhile, US President George W. Bush addressed Russia's relations with Georgia during his meeting with President Medvedvev on the sidelines of the G-8 summit in Japan on Monday. According to the Russian president's top aide Sergei Prikhodko, Medvedev told Bush that Moscow would like to "normalize our relations with Georgia, but so far we do not see sufficient will."